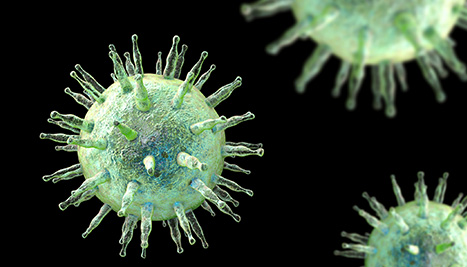 The Epstein-Barr virus (EBV), associated with many cases of Burkitt lymphoma in sub-Saharan Africa, has been found to be associated with a high frequency of genetic mutations caused by an enzyme called activation-induced cytidine deaminase (AID). The data reveal key genetic differences between Burkitt tumors with the virus and cases of another Burkitt subtype – more commonly found in North America – that is not associated with EBV. The results, published January 7, 2019, in Blood, hint at therapies that might be more effective for the type of Burkitt associated with EBV.

Burkitt lymphoma is a type of cancer that affects children more than adults. Traditionally, it has been classified as endemic in areas such as Africa and South America where the disease often coincides with EBV infection at a young age. Cases in North America are less likely to coincide with EBV infection and are referred to as sporadic.

The strong correlation between the presence of the virus and development of Burkitt suggests that the virus contributes to the development of the disease in some way, but exactly how has remained unknown. To explore possible mechanisms, Louis Staudt, M.D., Ph.D., Co-Chief of CCR’s Lymphoid Malignancies Branch, partnered with numerous labs around the globe to genetically compare the two subtypes.

By doing whole-genome sequencing, the researchers found that EBV-positive tumors exhibit unique mutational signatures. Just as mutations in one form of cancer are distinct from other forms, the researchers identified distinct mutational differences between sporadic and endemic Burkitt lymphoma.

Intriguingly, EBV-positive Burkitt samples had mutations associated with an enzyme called activation-induced cytidine deaminase (AID), which is known to damage DNA. Gene-sequencing data showed also that the EBV-positive lymphomas had higher levels of the enzyme.

“By comparing cases, we could see that the best predictor of whether you had high levels of AID and an AID mutational signature was whether you had an Epstein-Barr virus infection,” says Staudt. “So that’s pretty important from a clinical diagnostic point of view.”

They also found that EBV-positive cases tended to have mutations in the PI3K pathway. These results suggest the PI3K inhibitors could be more effective at treating this subtype of Burkitt lymphoma, although more research is needed.

Although Burkitt lymphoma is more common in children, they can be treated more easily. Further genetic studies like this one may reveal mutational signatures unique to adults with Burkitt, which could hint at better therapies for this population.