From father to daughter: A bone marrow transplant for GATA2 deficiency 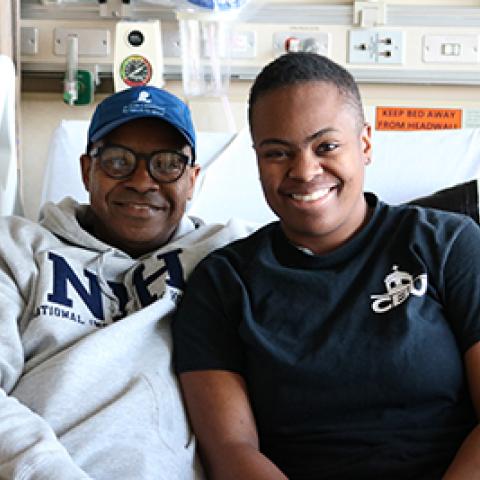 James and Jahleel are a father-daughter duo from Tennessee who came to NIH for Jahleel’s bone marrow transplant. Just 13 days before becoming his daughter’s bone marrow donor, James ran in the St. Jude Children’s Research Hospital Marathon while Jahleel was at the NIH Clinical Center preparing for the transplant.

After Jahleel suddenly fell ill during her senior year of high school, she and her parents searched for answers. Despite consulting with doctors at various medical centers around the country and the world, it took several years to find the answer they were looking for. Finally, they received a diagnosis of GATA2 deficiency, a rare genetic disease that causes a wide range of symptoms including viral and bacterial infections, myeloid leukemias and much more.

Dennis Hickstein, M.D., Senior Investigator in the Experimental and Transplantation Immunology Branch, says that GATA2 was only just identified in 2011 with patients presenting atypical infections and leukemia. It appeared to be genetic in many families as well. It was then discovered that the syndrome was caused by mutations in the GATA2 gene, and 150 mutations have now been identified.

Dr. Hickstein says: “Symptoms mostly begin in teenage years with full manifestation of disease in people usually in their 20s. Even though this is a rare disease, this is something the NIH specializes in. A lot of people come here because we have a lot of experience; we’ve transplanted 50 patients with GATA2 over the last 5 years.”

Jahleel began to receive treatment at St. Jude Children’s Research Hospital but was referred to an NIH clinical trial designed to evaluate if a bone marrow transplant would be a successful treatment for GATA2 mutations and associated conditions. The next step in her treatment was to find a transplant match. “Our first choice is a matched sibling, but [there’s only a 25 percent chance a sibling] will be a perfect match,” Dr. Hickstein says.

If siblings aren’t a match or are unable to donate, the next option is a match from an unrelated donor. The third choice of donor is a haploidentical-related donor, also known as a half match. Siblings have a 50-percent chance of being a half match, and parents are automatically a half match. After realizing neither of her younger sisters were a match, she was ecstatic when she found out her dad was a match.

While the preparation process for bone marrow donors is relatively simple and requires only one night in the hospital, recipients face a longer journey that includes chemotherapy, radiation and about 100 days in the hospital. Marrow harvested over several hours from donors is filtered, and cells are counted and administered to recipients via a blood transfusion. Dr. Hickstein said, “It takes about two weeks for bone marrow to grow where you could see it in the blood, a process called engraftment.”

Dr. Hickstein says that “recipients are followed two times a week in clinic in the 100 days after transplant and return for six-month and two-year checkups. Six months after transplant, usually all immunosuppressant drugs are stopped.”

“I don’t think you’re ever ready for something like this, but you just have to do it and hope it will all be all right,” Jahleel said before the surgery. James said of his daughter, “She is so strong, and I really admire her ability to persevere, keep moving and not quit.” Jahleel said the same of her dad; his dedication to everything he does has really inspired her.

“We’ve gotten to know them very closely over the course of the month in the hospital,” Dr. Hickstein said. “They’ve been just charming to work with.”

Post-transplant, everything seems to be going well for Jahleel thus far. She had to go back to the hospital for a few days due to fevers after the procedure, but Jahleel says she has “no complaints.”