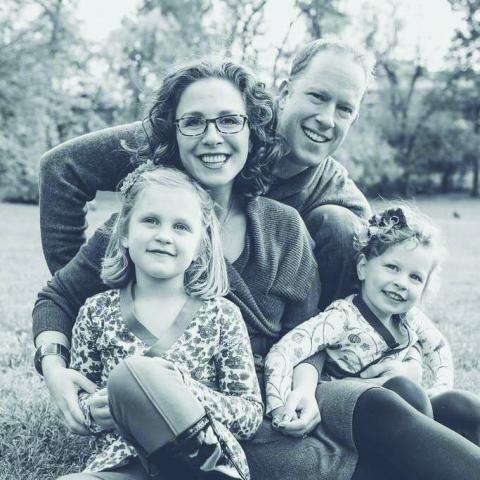 In January 2016, Sarah Rosenfeld had such severe pain shooting down her legs she couldn’t walk, sleep or care for her young daughters. After weeks of physical therapy for what she thought was sciatica, she had an MRI. Thirty-seven-year-old Rosenfeld learned she had something far worse: myxopapillary ependymoma, a rare cancerous tumor in her spinal cord.

The diagnosis also explained why Rosenfeld felt excruciating pain during the birth of both her daughters, in 2009 and 2012, by cesarean section. The tumor had blocked the pain medication from working.

After the shock of her diagnosis wore off, Rosenfeld and her husband started researching her cancer and treatment options. They learned myxopapillary ependymoma is a slow-growing tumor that arises from the supportive tissue of the brain and spinal cord and that the most common treatment is surgery.

“I interviewed almost every neurosurgeon in the Washington, D.C., area,” says Rosenfeld, a Maryland native. “When you have a major health scare or any big life crisis for that matter, you can choose one of two paths: fight or flight. Put on your boxing gloves and face what lies ahead or pull the covers over your head. I was in fight mode and determined to find the best available care.”

In April, Rosenfeld had surgery, but not all the tumor tissue was removed. It had spread to areas in her lower spinal canal where the surgeon couldn’t safely operate. She would need regular scans to monitor the remaining tumor tissue.

“This was advice I just couldn’t accept,” says Rosenfeld. She sought a second opinion and was referred to the National Institute of Neurological Disorders and Stroke (NINDS) at the National Institutes of Health (NIH). There, she met John Heiss, M.D., Chief of the Surgical Neurology Branch.

“I was told my best chance for complete and total remission was to have a second surgery followed by six weeks of radiation,” says Rosenfeld.

In October, Rosenfeld had a nine-hour surgery to remove nearly all the remaining tumor tissue. Before she began radiation, Rosenfeld met Mark Gilbert, M.D., Chief of the Neuro-Oncology Branch (NOB) at the Center for Cancer Research (CCR), National Cancer Institute (NCI), at the NIH and enrolled in his natural history clinical study for central nervous system tumors.  A natural history study follows a group of people over time who have, or are at risk of developing, a specific disease. This study aims to better understand rare brain and spinal cord tumors and uncover areas for further research.

“We’re integrating patient support and focused research efforts so that we can make more therapies available to more patients sooner. So, what would take 10 years, we hope to achieve in five years,” says Dr. Gilbert.

For the NCI-CONNECT study, Rosenfeld answered a few questionnaires, provided a saliva sample and consented to researchers evaluating her tumor tissue taken during surgery. “It was a very smooth and easy process and didn’t require extra appointments,” says Rosenfeld.

Rosenfeld is also participating in two other studies at the NIH Clinical Center. “I feel so lucky to be part of something that could benefit people with rare cancers,” says Rosenfeld.  “And I’m under the care of the best and brightest minds in all of medicine just a few miles from my home.”

Rosenfeld grew up with the NIH in her backyard but never thought she would be a patient there. “I knew the NIH for its research reputation. So, before my first appointment, I thought my experience would be like something out of a science fiction movie,” she says. Instead, Rosenfeld says the experience is unmatched. “Everyone is responsive, helpful and supportive and takes the time to answer my millions of questions. They genuinely care about my well-being.”

The proximity has allowed friends and family to readily help with childcare, meals and even be a shoulder to cry on in the middle of the night. The support she received inspired her to volunteer for Friends of Patients at the NIH. “I want all patients to have the same emotional, financial and physical support I was so fortunate to have,” she says.

Rosenfeld also wants to encourage patients to be their own advocate. “My first neurosurgeon was accomplished but had no experience treating ependymoma and couldn’t recommend studies or resources for my cancer,” she explains. “Follow your intuition and don’t stop until all your questions are answered. My decision to come to the NIH saved my life.”

Rosenfeld has been cancer-free since December 2016, but she continues to be monitored and returns for regular follow-up scans and visits with Dr. Gilbert at the NIH about every four months. When she comes back for appointments, Rosenfeld still gets nervous. But she quickly finds peace by visiting her favorite atrium in the Clinical Center - the same spot she saw the sunrise the morning of her surgery.

“Sometimes, I can’t believe what’s happened to me. But then I see how far I’ve come and how well I’m doing today,” says Rosenfeld. “I’m here. I’m healthy. I’m brave.”