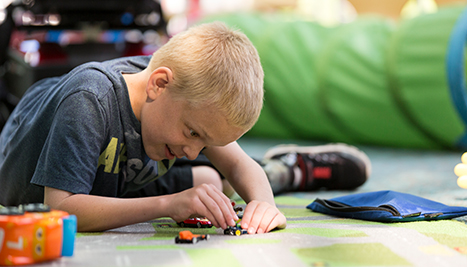 The U.S. Food and Drug Administration granted orphan drug status in February to selumetinib for use in patients with the genetic disorder neurofibromatosis type 1 (NF1), who often develop tumors of the peripheral nervous system. Twenty to 50 percent of NF1 patients develop tumors called plexiform neurofibromas in their peripheral nerve sheaths. Although these nerve tumors are benign, they can cause disfigurement, pain, restricted motion, loss of vision and other complications. No effective medical therapies for this type of tumor exist.

In 2011, Brigitte Widemann, M.D., Chief of the Pediatric Oncology Branch, and her colleagues started a phase I clinical trial to test selumetinib in NF1 patients with plexiform neurofibromas. NF1 causes activation of a protein called RAS, which leads to tumor development. Selumetinib, developed by AstraZeneca, blocks an enzyme called MEK, which is in the RAS pathway. The team found that in the majority of patients, tumors shrank by 20-50 percent when they were given selumetinib.

Orphan drug status is given to therapies that treat, prevent or diagnose rare diseases. Although this designation does not necessarily mean that the treatment will be approved by the FDA or reach patients faster, it enables the drug’s developers to receive incentives such as tax credits and provides them exclusive rights for seven years to further the treatment’s potential for that condition. “It gives a good signal that we’re moving in the right direction,” Widemann says.

Widemann’s team is now conducting a phase II trial of selumetinib for children with NF1 and plexiform neurofibromas. In addition to monitoring tumor shrinkage, the researchers will evaluate whether selumetinib leads to improvements in other measures such as pain, vision, range of motion and disfigurement. Results of the trial are expected this year.