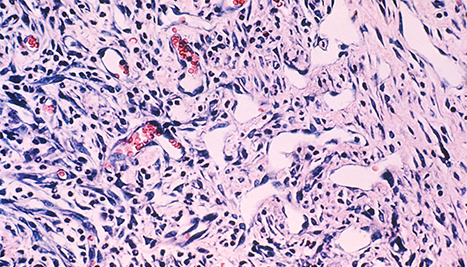 Kaposi sarcoma is a rare form of cancer that usually presents as skin lesions but can also develop in several other areas of the body including the lungs, lymph nodes and digestive system. The disease occurs at a rate of about 6 cases per million people each year in the United States, and mostly affects people who are immunocompromised.

The approval of Pomalyst was based on the findings of a Phase 1/2 open-label, single-arm study conducted evaluating the safety, pharmacokinetics and efficacy of Pomalyst in patients with HIV-positive and HIV-negative symptomatic Kaposi sarcoma, the majority of whom had advanced disease. The study was performed under a Cooperative Research and Development Agreement (CRADA) by a team led by Robert Yarchoan, M.D., of the HIV and AIDS Malignancy Branch.

“Pomalyst has shown positive results in Kaposi sarcoma patients, regardless of their HIV status,” said Dr. Yarchoan. “Also, it provides a therapy that is taken orally and works by a different mechanism of action than the cytotoxic chemotherapy drugs generally used to treat Kaposi sarcoma.”