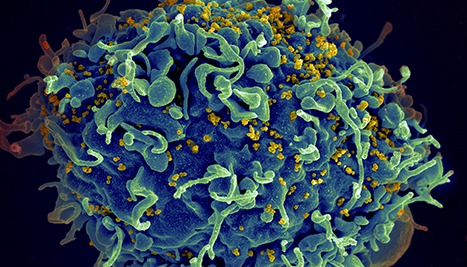 HIV-associated primary central nervous system lymphoma is a type of cancer that can develop in people whose immune systems are severely weakened by HIV. Here, a human T cell (blue) is seen under attack by the virus (yellow).
Image credit: National Institute of Allergy and Infectious Diseases, National Institutes of Health

CCR scientists have determined that, in combination with antiretroviral therapy, chemoimmunotherapy can lead to long-lasting remissions of HIV-associated primary central nervous system lymphoma (HIV-PCNSL). In a clinical trial, patients whose HIV-PCNSL responded to chemoimmunotherapy retained neurocognitive function and were able to live independently following treatment.

HIV-PCNSL is a cancer of the lymph tissue that forms in the brain, spinal cord, meninges (a protective covering around the brain and spinal cord) or eye. It develops almost exclusively in people whose immune systems are severely weakened by HIV. People who are diagnosed with HIV-PCNSL are typically dealing not only with the cancer itself but also other effects of uncontrolled HIV infection.

In the early days of the AIDS epidemic, “there was a sense that it was basically a death sentence—that people lived just a few months and either died of their tumor or died of AIDS or some combination therein,” says Robert Yarchoan, M.D., Chief of CCR’s HIV and AIDS Malignancy Branch. Many doctors were reluctant to treat patients who were already so sick with chemotherapy or even to conduct a biopsy to definitively diagnose HIV-PCNSL. Most people with HIV-PCNSL received whole-brain radiation, which treated the cancer but often left patients with serious cognitive impairments.

When antiretroviral therapy made it possible for people with HIV to live longer, healthier lives, it was important to consider a new approach to treating HIV-PCNSL. So Yarchoan and CCR colleague Richard Little, M.D., designed a phase II clinical trial to evaluate whether chemoimmunotherapy could effectively treat HIV-PCNSL and spare people the damaging cognitive impairments associated with whole-brain radiation.

Because most people living with HIV today are treated with antiretroviral therapy, HIV-PCNSL has become a rare disease in the United States. The trial included eight African Americans, two Hispanics, one African and one Caucasian who enrolled between 2006 and 2016. All 12 people were treated at the NIH Clinical Center with both chemoimmunotherapy (high-dose methotrexate and rituximab, which have been used successfully to treat other HIV-associated lymphomas) and antiretroviral therapy. Those whose cancer remained or returned following their initial treatment subsequently received a round of a different therapy.

Today, eight of the study participants remain cancer-free. The survivors have no severe cognitive impairments, and two years following their treatment, were able to live independently.

Although the researchers are not planning a phase III clinical trial, they say their findings, reported July 1, 2020, in Blood, suggest that chemoimmunotherapy should be considered the standard of care for patients with HIV-PCNSL. “Everybody was receiving antiretroviral therapy, so really, you take the HIV out of the equation pretty quickly,” says Assistant Research Physician Kathryn Lurain, M.D., M.P.H., who is the first author of the study. “I think this shows that if we can control a person’s HIV, we really can aggressively treat their cancer.” Yarchoan adds that with a potentially curative treatment available, it is now critical that physicians rapidly obtain a proper diagnosis when HIV-PCNSL is suspected to avoid irreversible brain damage from tumor growth.