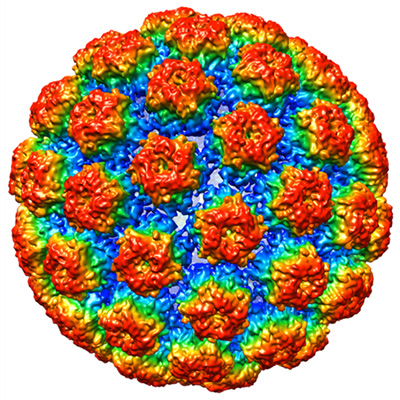 The structure of HPV 16, which causes cervical cancer.
Photo courtesy of Christopher Buck

Researchers have discovered which genus of human papillomavirus (HPV) is responsible for warts found in patients with WHIM syndrome, a rare autoimmune disease, and determined that the drug plerixafor could successfully treat those patients. CCR researchers worked collaboratively with scientists from the National Institute of Allergies and Infectious Diseases (NIAID) and reported their findings in The New England Journal of Medicine on January 10, 2019.

WHIM syndrome is the result of mutations in the CXCR4 gene. Patients with this syndrome become susceptible to warts, infections and cancer. It is extremely rare with only 60 cases reported worldwide. Nonetheless, scientists are interested in studying this syndrome to improve the low quality of life most patients experience and to gain insight into the role of HPV in its progression. Research also may shed light on how HPV behaves in other diseases.

Christopher Buck, Ph.D., Senior Investigator in CCR’s Laboratory of Cellular Oncology, and his colleague, Diana Pastrana, Ph.D., were interested in finding out which genus of HPV was causing the warts among WHIM syndrome patients treated at NIH’s Clinical Center. Buck and Pastrana’s research involved deep gene sequencing of 75 samples from these patients’ warts.

“HPVs belong to three major genus groups: alpha, beta and gamma,” explained Buck. “HPVs in the alpha group are linked to cervical cancer. Healthy people often shed low levels of beta and gamma HPVs from their skin, but they usually don’t cause any problems.”

However, when they looked at the gene sequences of the warts from the WHIM patients, they found they were mostly caused by gamma HPVs. “This was something we hadn’t seen before,” said Pastrana.

On the clinical side, Phillip Murphy, M.D, Section Chief of NIAID’s Laboratory of Molecular Biology, and David McDermott, Staff Clinician in the laboratory, tested the drug plerixafor with the patients. Plerixafor is approved for use in non-Hodgkin lymphoma and multiple myeloma. After being treated with plerixafor, most of the patients’ warts went away.

The clinical trial is ongoing along with research into the role of HPV in other conditions. “This is the golden age of deep sequencing,” said Buck. “We are now looking at genetic sequences for viruses that may be driving other kinds of cancer. There is some evidence that gamma HPV may cause bladder cancer.

“We suspect that more cancers may be caused by HPV viruses,” continued Buck. “If that’s the case, the next generation of HPV vaccines, already under development, may be able to prevent an increasing number of cancer types.”