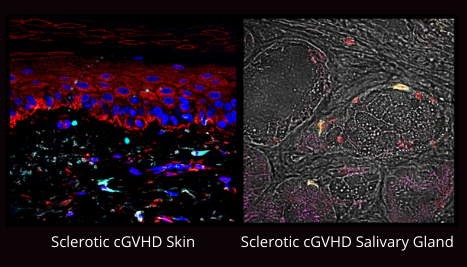 The immune-modulating drug pomalidomide can be an effective treatment for chronic graft-versus-host disease (cGVHD), according to the results of a CCR clinical trial led by Steven Pavletic, M.D., M.S., Senior Clinician in CCR’s Immune Deficiency Cellular Therapy Program and reported Feb. 18, 2021, in Blood.

cGVHD is a complex condition that sometimes develops after a patient receives a bone marrow transplant from a healthy donor as a treatment for blood cancer. As the immune system rebuilds itself following the transplant, donated immune cells may become programmed to attack the body’s own tissues. Symptoms vary among patients, but they can impact the skin, liver, intestines, eyes, mouth, hair, nails, joints, muscles, lungs, kidneys and genitals. Hardening of the skin, a condition known as sclerosis, can limit mobility in patients with severe cGVHD.

In the United States, about 5,000 people develop cGVHD each year. About half of these people get better with steroid treatment. For those who do not, dozens of other treatments can be tried, but there is no way to predict which will be effective for an individual. For most people, symptoms do eventually resolve, but this can take years.

“It's really becoming a big issue now because you're cured from leukemia and then you end up having a new disease,” Pavletic says.

Pavletic and his colleagues suspected pomalidomide might be beneficial to patients with cGVHD, in part because it is closely related to another immune-modulating drug, thalidomide. Thalidomide has been found to reduce the symptoms of cGVHD, but only at doses high enough to cause significant side effects. Pomalidomide, which is used primarily to treat multiple myeloma, is well-tolerated by cancer patients.

Thirty-four patients with severe cGVHD participated in a randomized clinical trial at the NIH Clinical Center. Each patient took pomalidomide daily, with half taking a low-dose capsule (0.5 mg) and the other half taking a high dose (escalating from 0.5 mg to 2 mg). After six months, 16 patients had experienced a meaningful reduction in their symptoms, with no difference between the two groups.

“This is a group of people whose symptoms are very difficult to treat,” Pavletic says. “Thirty-two had very severe sclerosis and had, on average, received five different drugs that were not helpful. Patients had an average of five organs involved by cGVHD. In spite of all this, we observed that about half of these patients actually had benefits when given this treatment.”

Based on the findings, Pavletic says physicians could consider low-dose pomalidomide as a treatment option for patients with severe cGVHD, particularly those with sclerotic disease.