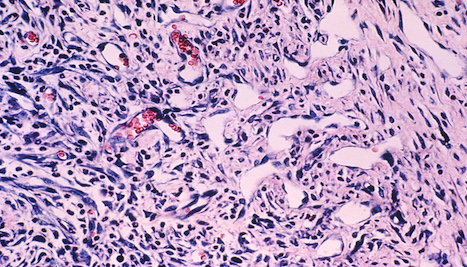 CCR physician-scientists have launched a clinical trial to evaluate whether the immune-stimulating molecule NHS-IL12, alone or in combination with an experimental immunotherapy called M7824, reduces tumors in patients with Kaposi sarcoma.

Kaposi sarcoma is a cancer caused by infection with the Kaposi sarcoma herpesvirus. Most people infected with this virus do not develop Kaposi sarcoma, but it can appear in immunocompromised individuals, including people living with HIV. Researchers are seeking new treatments for Kaposi sarcoma because although the cancer often responds to chemotherapy, the viral infection remains after treatment, usually contributing to relapse. Most patients with Kaposi sarcoma need chemotherapy periodically for the rest of their lives, and this long-term treatment is associated with significant side effects.

The new treatments under investigation are designed not just to target tumors but also to counter the dampening effect the cancer-causing virus has on patients’ immune systems. “These therapies specifically aim to address how the virus that causes Kaposi sarcoma upsets and downregulates some of the ways that our immune system can recognize Kaposi sarcoma,” says Ramya Ramaswami, M.B.B.S., M.P.H., a Physician-Scientist Early Investigator in CCR’s HIV and AIDS Malignancy Branch who is leading the trial. “These drugs aim to take off the blindfold so the immune system can better recognize these tumors,” she says.

NHS-IL12, which all trial participants will receive, is an immune-stimulating molecule that researchers are investigating to see if it will help patients’ immune systems fight their tumors. A closely related molecule, IL12, showed promising results against Kaposi sarcoma in early clinical trials at NCI, led by Robert Yarchoan, M.D., Chief of the HIV and AIDS Malignancy Branch. NHS-IL12 is a modified version of IL12, designed to home in on tumors by seeking out regions of exposed DNA. Due to this targeted delivery, NHS-IL12 is expected to cause fewer side effects than its predecessor.

M7824, also known as bintrafusp alfa, which some trial participants will receive in combination with NHS-IL12, is an experimental immunotherapy that blocks signals that the herpesvirus uses to rein in the immune system. It is a newer generation immunotherapy designed to prevent the resistance that tumors develop to the class of drugs known as checkpoint inhibitors. It is currently being evaluated in clinical trials for several other types of cancer.

Up to 56 participants with Kaposi sarcoma will be recruited for the combined phase I/phase II trial, which is open to people with or without HIV. Participants will be treated at the NIH Clinical Center in Bethesda, Maryland, and results from the trial are expected in two to three years.

Ramaswami says the trial is particularly exciting because in the past, there has been usually a lag time between the development of new cancer treatments and the availability of those treatments for people living with HIV. “People living with HIV should have access to clinical trials just like other patients who have cancers,” she says. “The drugs in this study are very modern. We’re using the next generation of immunotherapy agents and combining it with a variation of a drug that we’ve used before. We’re hoping that altogether, this leads to new chemotherapy-sparing agents for Kaposi sarcoma.”