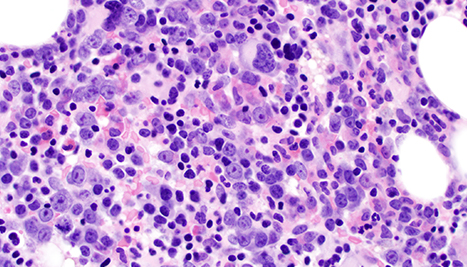 Researchers at CCR have discovered that a mutation affects splicing factor U2AF1 in the spliceosome, the machinery located in cells that cuts long transcripts of pre-messenger RNA into messenger RNA. They also found that U2AF1 plays a role beyond splicing and can control the translation of hundreds of messenger RNA into proteins. The mutation, however, causes U2AF1 to misregulate translation in the cell on a large scale, causing increases in proteins involved in cancer progression. A close look at one affected protein, interleukin 8 (IL8), showed that production increased as a result of the mutation, leading to inflammation and cancer spread. These findings were published March 6, 2019, in Genes & Development.

Research showing mutations in the spliceosome first emerged in 2011 and came as a surprise. “These were mutations in the splicing machinery, which processes virtually all RNA, and why they would have disease-specific or pathway-specific effects was unknown and hard to fathom,” said Daniel Larson, Ph.D., Investigator in CCR’s Laboratory of Receptor Biology and Gene Expression. “These mutations are most prevalent in blood cancer, specifically myeloid malignancies such as acute myeloid leukemia (AML).”

To better understand how U2AF1 affects proteins, Larson’s team looked at one protein, IL8, which showed increased production as a result of changes in the functioning of splicing factor U2AF1. The researchers found that they could block IL8 production in mice, which reduced cancer progression.

They then looked at cells from 24 patients with AML, a disease with a high mortality rate. “We did indeed find IL8 in AML patients,” noted Larson. “This finding is likely a direct consequence of the new role for U2AF1 we discovered.”

Larson’s next step is to use this knowledge in the clinic. Working at the NIH Clinical Center, the researchers are developing a protocol for a clinical trial to test an agent that can block IL8 production.

In the meantime, Larson and his colleagues are planning to look at other spliceosome components in addition to delving deeper into how mutations affect the behavior of cells.