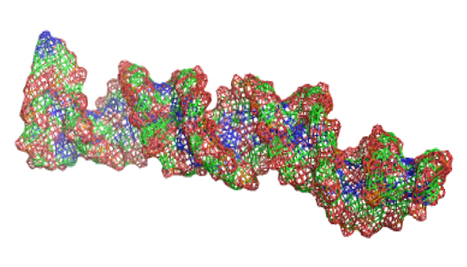 CCR researchers have identified a compound that slows the growth of cancer cells by reducing levels of a small, gene-regulating RNA molecule known as miRNA-21-5p (miR-21). The growth-arresting compound, which is produced by Streptomyces bacteria, was identified through a screen designed to find natural products that target a molecular precursor of the cancer-promotingRNA.

The miR-21 molecule, whose impact on cellular growth appears to contribute to many cancers, is one of hundreds of microRNAs produced by human cells. These small bits of RNA do not encode proteins, but impact a range of cellular functions, and many have been found to play important roles in disease. Targeting these regulatory molecules offers unique therapeutic opportunities, says Barry O’Keefe, Ph.D., Acting Chief of CCR’s Molecular Targets Program and Chief of NCI’s Division of Cancer Treatment and Diagnosis’ Natural Products Branch.

“In the case of miR-21, we’re talking about something that regulates several different gene functions simultaneously,” he says. “To target those each individually would be very challenging—but targeting the microRNA allows you access to [those functions].”

A challenge, O’Keefe says, is finding small molecules that selectively target specific microRNAs. His team’s findings, reported May 30, 2019, in Cell Chemical Biology, show that it can be done. O’Keefe and his colleagues used a novel screening approach to evaluate the impacts of 3,682 pure natural products on the stability of miR-21’s precursor molecule, pre-miR-21. Each compound was combined with pre-miR-21 and then exposed to a range of temperatures. For each sample, the stability of pre-miR-21 was assessed 650 times as the temperature steadily increased. Then O’Keefe’s team zeroed in on the compounds that had most dramatically changed the microRNA’s stability, looking for evidence that they could alter the RNA’s function in cells.

The top compound in the screen was butylcylcoheptyl prodiginine (bPGN), a bright red chemical that significantly reduced pre-miR-21’s thermal stability and dramatically slowed the growth of colon cancer cells in the laboratory. The team’s experiments showed that when bPGN interacts with pre-miR-21, the RNA-processing enzyme Dicer cannot convert it into functional miR-21. As a result, the activity of miR-21’s target genes, many of which influence cell growth and survival, shifts. Encouragingly, bPGN did not alter the thermal stability of several other small RNAs tested by the team.

O’Keefe’s team plans to take advantage of further biophysical screens to identify direct binding interactions between molecules. Currently, he says, researchers have few tools for studying and targeting specific regulatory RNAs, so screening broader panels of compounds and evaluating new targets is a high priority. As new classes of chemicals that bind to microRNAs are identified, researchers will be better able to investigate RNA’s functions and roles in disease as well as to optimize those molecules for use as potential drugs.