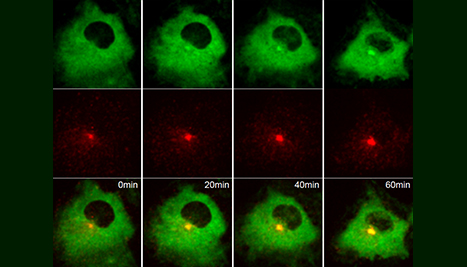 Cilia—thin, hair-like structures that protrude from the surface of many cells—are involved in sensing the environment, sending and receiving molecular signals and moving the cells and the fluid that surrounds them. Abnormalities in the formation and function of cilia are associated with a number of diseases, including cancer. Now, CCR scientists have identified a molecular switch that regulates the formation of a protein complex required for cilia formation.

Researchers led by Christopher J. Westlake, Ph.D., Investigator in the Laboratory of Cell and Developmental Signaling, had shown in a previous study that removing serum from cell culture causes the Rab11 protein—located on membrane-bound sacs inside cells known as endosomes—to bind to the Rabin8 protein and shuttle it to a structure known as the mother centriole, triggering cilia to form. In a new study, which appeared June 13, 2019, in Developmental Cell, the investigators sought to identify the factor in serum that prevented Rab11-Rabin8 binding and cilia formation. They showed in various types of healthy human cells that the binding of a growth factor, called LPA, to the cell surface protein LPA receptor 1 (LPAR1) was responsible for blocking cilia formation.

LPA-LPAR1 binding activates a protein kinase PI3K, which subsequently activates another protein kinase called Akt. Westlake and team reported that Akt stabilizes the binding of the WDR44 protein to Rab11, which prevents Rab11 from binding to Rabin8 and initiating cilia formation. In addition, they showed that WDR44 and another protein, FIP3, compete with each other to bind to Rab11. Removing serum, and therefore LPA, blocks Akt activation. Without Akt stabilizing the binding of WDR44 to Rab11, FIP3 binds to Rab11. This, in turn, enhances the binding of Rab11 to Rabin8, spurring cilia formation. The researchers showed that this switch from a Rab11-WDR44 complex to a Rab11-FIP3-Rabin8 complex is required for cilia formation to occur.

“This could provide insight into why some cancer cells fail to build cilia and the clinical implications there,” Westlake notes.

Because cilia are required for several signaling pathways that are strongly associated with cancer, defects in cilia formation could make them go awry, causing tumors to emerge. In fact, such defects have been reported in pancreatic, breast, renal and many other types of cancer. Importantly, LPA, PI3K and Akt have long been known to be associated with the development of cancer. If a cancer cell has impaired cilia formation, the findings suggest clinicians could coax them to grow cilia through affecting LPA or other molecules that strongly activate Akt. The study by Westlake and team points to several potential therapeutic targets that may work by influencing cilia formation.