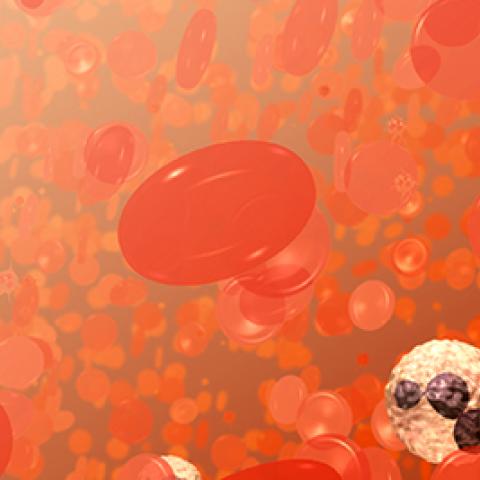 This is a field of blood cells. The bi-concave disks are red blood cells or erythrocytes. The white cell with the dark purplish, multi-lobed nucleus is a neutrophil, a type of white blood cell or leukocyte. The smaller spikey objects are platelets.
Photo credit: Donald Bliss

Pre-clinical studies conducted by CCR investigators and colleagues show that platelets, tiny cells that promote blood clotting, when activated by the CD97 protein on the surface of tumor cells, enable the tumor cells to invade healthy tissue and then metastasize. The study, published April 17, 2018, in Cell Reports, was led by Kathleen Kelly, Ph.D., Chief, Laboratory of Genitourinary Cancer Pathogenesis.

Previous studies have shown that the CD97 protein receptor can affect cell adhesion and migration, but the interaction of CD97 receptors expressed on tumor cells with platelets has not been studied previously.

In laboratory experiments, the researchers determined that activation of platelets by CD97 leads to a process wherein lysophosaphatidic acid (LPA) is released, giving the tumor cell more invasive properties as a result of binding to a CD97-LPA receptor complex. Concurrently, tumor-activated platelets secrete ATP, a molecule which helps tumor cells breach the endothelial barrier of healthy tissue. These invasive processes give the tumor cell an increased ability to metastasize.

Using mouse models of thyroid cancer as well as experimental mouse and human metastasis models of breast and prostate cancer, the researchers attempted to reproduce their research in a living system. The investigators found that CD97 expression was necessary for tumor cells to transit through blood vessels in the lungs and for metastasis formation.

“The mechanistic studies that we did in the laboratory showing platelet activation, LPA-dependent signaling and effects upon transmigration are central because they allowed us to model the disease process, and while the mouse studies are consistent with our lab model, it is hard to achieve the same level of detail in a mouse,” said Dr. Kelly.

The findings suggest that by blocking the interaction of CD97 with platelets, the potential infiltration of healthy tissue by tumor cells could be reduced. The next step is to look at possible drugs or agents that could affect that blockage.