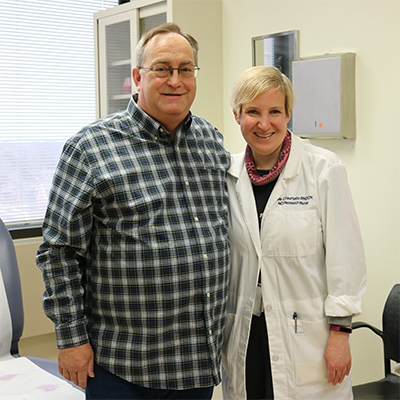 Randy is a father, husband, engineering quality consultant and lifelong “Motor City” resident. He was diagnosed with hairy cell leukemia in 1998 at the age of 41.

Hairy cell leukemia (HCL) is a rare type of leukemia in which a type of white blood cell called abnormal B lymphocyte is present in the bone marrow, spleen and the blood circulating throughout the body. The disease gets its name from its appearance; when viewed under a microscope, the abnormal cells appear to be covered with tiny hair-like projections.

Although many patients with hairy cell leukemia experience a remission, 30 to 50 percent will relapse five to ten years after their first treatment. Patients receive further treatments and although they may go into remission again, the length of those remissions gets shorter and shorter, and the toxicities of the treatments accumulate.

Randy’s treatment journey was not easy. After his diagnosis, he was initially treated with cladribine and received additional doses in 2001 and 2003. However, when his marrow was no longer able to tolerate it, he was treated with another cancer drug, rituximab, in 2005. That year, he heard about a National Cancer Institute (NCI) clinical trial for hairy cell leukemia using the experimental drug moxetumomab pasudotox, often referred to as moxe. His wife of 40 years, Vicki, found the trial online.

Moxe’s history dates back to the 1990s when Ira Pastan, M.D., Co-Chief of the Laboratory of Molecular Biology at the Center for Cancer Research, discovered the compound BL22, which led to the improved molecule moxe. It was later licensed to MedImmune, a subsidiary of AstraZeneca, for clinical development. Moxe’s clinical trials were directed by Robert J. Kreitman, M.D., Senior Investigator in Pastan’s lab. After promising results in clinical trials for relapsed HCL patients, moxe received FDA approval in September 2018 for patients with HCL who have already undergone at least two lines of standard treatments.

Randy and his wife contacted NCI about participating in the BL22 trial and sent blood samples for evaluation. Unfortunately, he did not meet study criteria and was thus not able to participate in the trial. He continued treatment with rituximab through 2015 and would regularly achieve two-year remissions with the drug before relapsing. From 2011-2015, Randy was able to achieve a four-year remission using rituximab in combination with intravenous immunoglobulin treatments.

In 2015, Randy’s oncologist recommended they revisit the BL22 study and discovered the trial testing improved molecule moxe. The criteria that had previously prevented Randy’s participation had been removed, and he was able to enroll in the trial. He says, “Other than having fevers after my first treatment each visit, I tolerated the moxe treatment very well.”

After receiving treatment, Randy was in complete remission after 18 months with zero residual disease. In his last visit in March of 2018, his biopsy still showed a complete response with a suggestion of minimal amounts of residual disease, but by March of 2019 this was gone and he again had zero minimal residual disease.  Since getting moxe, his blood counts have remained at a normal level for the first time since his initial treatment in 1998.

Randy says that he could never say enough good things about his care team at the Clinical Center, the nation’s largest research hospital on the campus of the National Institutes of Health (NIH). “Dr. Kreitman, Julie Feurtado and the nursing team at the NIH could not have given me and [my] family any better treatment and support. Their compassion for the patients is remarkable and very much appreciated.”