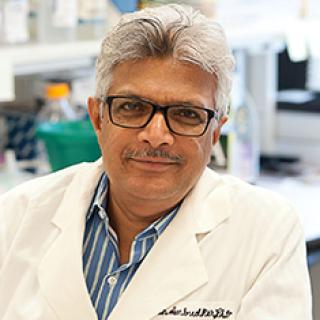 Our work is focused on the elucidation of the role of ATP-binding cassette (ABC) drug transporters in the development of multidrug resistance (MDR) in cancers and on the development of new therapeutic strategies to increase the efficiency of chemotherapy for cancer patients. For these studies we are working with human P-glycoprotein (Pgp, ABCB1) and ABCG2 and have employed innovative approaches including biophysical techniques such as continuous wave and pulse double electron-electron resonance ESR spectroscopy, transition metal ion Forster resonance energy transfer (tmFRET), chemical crosslinking, directed mutagenesis, and molecular modeling to elucidate molecular mechanisms of the ATP hydrolysis catalytic cycle and drug transport, the use of Fab of monoclonal antibodies and various mutant proteins arrested at various steps in the catalytic cycle to enable us to fix the transporter in a particular conformation for resolution of the structure of Pgp by X-ray crystallography and for 3-D image analysis of single molecules by cryo-electron tomography.

1. Elucidation of the Catalytic Cycle of ATP Hydrolysis, Transport Pathway and the Molecular Basis of Polyspecificity of P-gp

(a) Mechanism of inhibition of ATP hydrolysis by modulators: Although a majority of substrates and modulators stimulate the basal ATPase activity of P-gp, some of them including zosuquidar, tariquidar and elacridar inhibit it. We found that a phenylalanine-tyrosine structural motif in the drug-binding pocket is critical for the inhibition of ATP hydrolysis by zosuquidar and others. The substitution of these residues with alanine results in stimulation instead of inhibition of P-gp ATPase activity, demonstrating that hydrogen bond interactions govern drug-mediated inhibition.

(b) Conformational changes associated with the catalytic cycle: To monitor the conformational changes occurring during ATP hydrolysis and drug transport, we are using a biophysical technique known as transition metal ion fluorescence resonance energy transfer (tmFRET). Preliminary results of tmFRET and chemical crosslinking of cysteine residues with bi-functional crosslinkers suggest that human P-gp is a very flexible molecule and that its NBDs are much closer to each other in the detergent solution than those in the published mouse P-gp structure.

(c) Molecular mechanism of polyspecificity: We are using molecular modeling and mutagenesis approaches to elucidate on a molecular level how this transporter recognizes and transports a wide variety of structurally dissimilar compounds. Our studies with a triple mutant P-gp in a cys-less background demonstrate that when the primary binding site for cyclosporine A, tariquidar or valinomycin is disabled by mutagenesis, these drugs bind to alternate sites, which are capable of transport. Collectively, these data demonstrate that each substrate can bind to more than one site and all sites are capable of transport function, indicating that P-gp exhibits exceptional chemical flexibility for interaction with substrates and modulators.

2. Development of Potent Non-Toxic Small Molecule Modulators/Inhibitors of ABC Transporters
We continue to study clinically important tyrosine kinase inhibitors (TKIs) for their interactions with ABC drug transporters. We demonstrated that the second generation TKI nilotinib is transported by both P-gp and ABCG2. In addition, we have generated pharmacophore models for optimal interaction of nilotinib with P-gp, ABCG2 and BCR-ABL kinase. We have identified residues in the drug-binding pocket of P-gp that are critical for interaction of this drug by using three-dimensional quantitative structure-activity relationship, molecular modeling, and mutational mapping approaches. Several tyrosine kinase inhibitors that are used in the clinic or are in phase II/III clinical trials including ponatinib, saracatinib and neratinib interact with P-gp and potently modulate its transport function. These studies strongly suggest that combining one or two of these inhibitors with conventional chemotherapeutic drugs may help to increase the efficiency of chemotherapy in cancer patients.

3. Resolution of the Three-Dimensional Structure of Human P-gp
Resolution of the three-dimensional structure of P-gp is an ongoing project and for this we have expressed human and mouse P-gp in High-Five insect cells and developed a purification scheme that has yielded total protein of 7.5-10.0 mg of homogeneously pure protein at 10-12 mg/ml concentration. We have been able to obtain by X-ray crystallography a 7- to 8-angstrum resolution structure of mouse P-gp purified from insect cells. Due to the flexible nature of human P-gp and the difficulty of generating crystals of good diffraction quality, we are also using single particle analysis by cryo-electron microscopy technique. We are optimizing conditions to reach a sub-nanometer resolution to obtain the structure of human P-gp in at least three different conformations.

4. Role of Intracellular Loops in Protein Folding and the Mechanism of Rescue to the Cell Surface by Pharmacological Chaperones of Mutant P-gp
In several ABC transporters point mutations result in retention of protein in the ER due to misfolding or improper processing. We found that conserved residues in intracellular loops (ICLs) 1 and 3 play a role in proper folding and maturation of human P-gp. Interestingly, these residues do not play a role in the transport function of P-gp. In addition, we demonstrated that pharmacological chaperones including cyclosporine A, FK506 and small molecule CFTR correctors rescue the misfolded mutant P-gp in an immunophilin-independent pathway by decreasing its association with the Hsp70 chaperone, thus allowing the protein to be trafficked to the Golgi for maturation and then localize at the cell surface. Our results strongly suggest that a similar mechanism may be operative in the rescue of misfolded mutant CFTR, ABCG2 and other ABC transporters associated with disease conditions.

Elucidation of the structural basis of interaction of the BCR-ABL kinase inhibitor, nilotinib (Tasigna) with the human ABC drug transporter P-glycoprotein 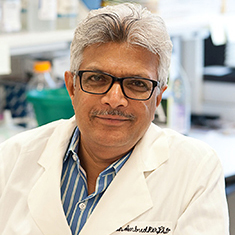 Dr. Ambudkar obtained his Ph.D. from Madurai Kamaraj University, Madurai, India, and received his postdoctoral training in membrane bioenergetics at the University of Maryland. He continued his postdoctoral work on biochemistry of membrane transport proteins at the Johns Hopkins University School of Medicine. In July 1995, after 5 years as an assistant professor in the departments of medicine and physiology at Johns Hopkins, he joined the Laboratory of Cell Biology at the CCR, NCI. He serves as Deputy Chief of the Laboratory of Cell Biology and Chief of the Transport Biochemistry Section. 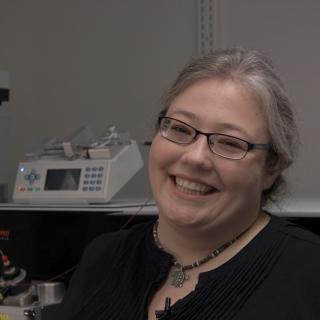 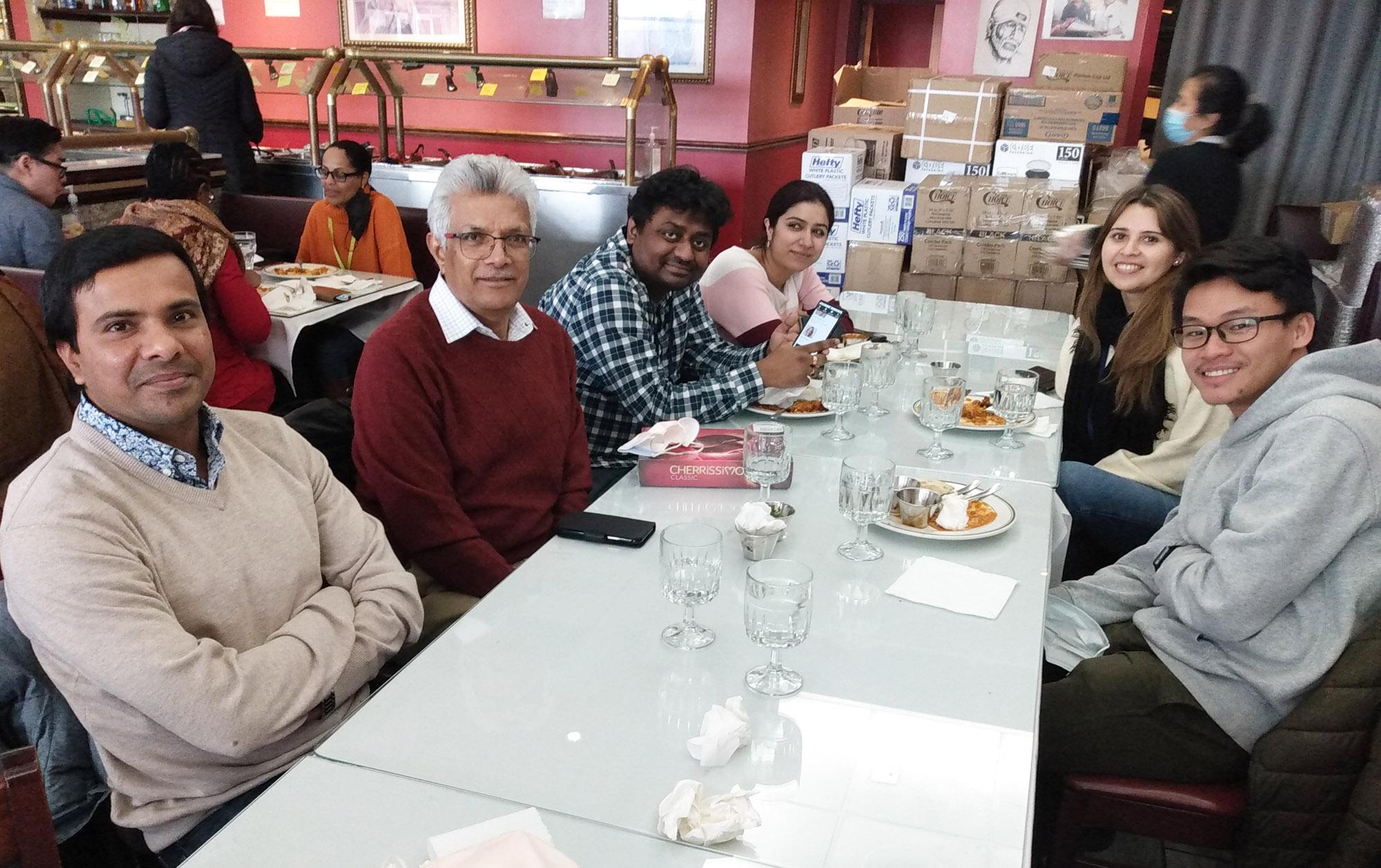 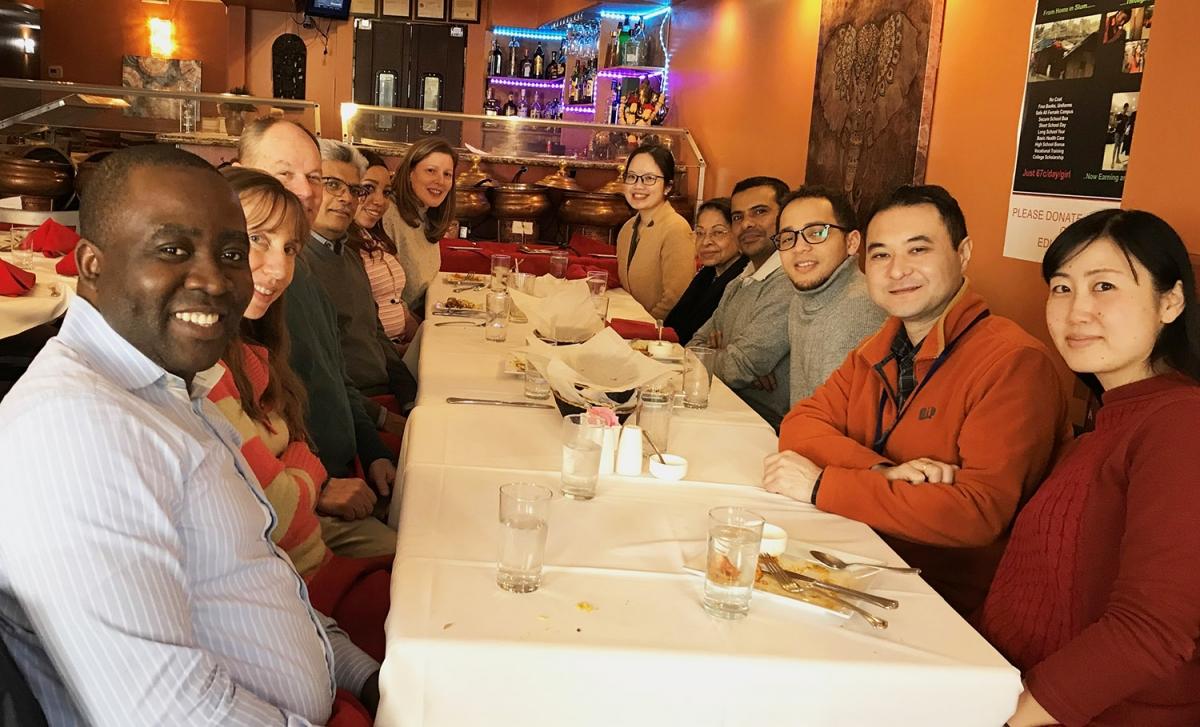 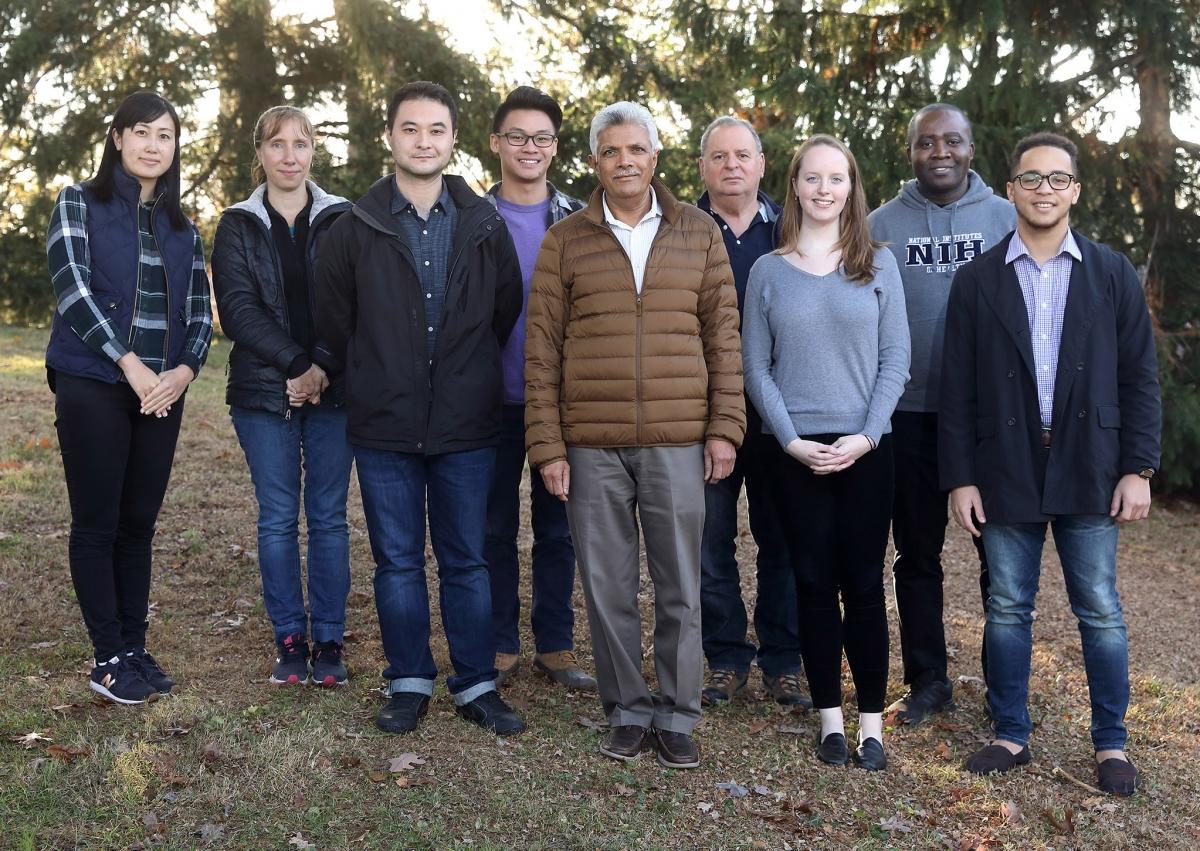 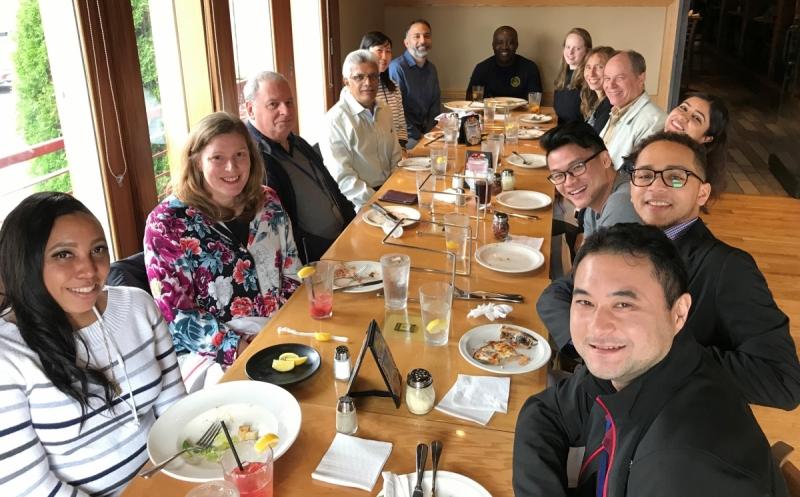 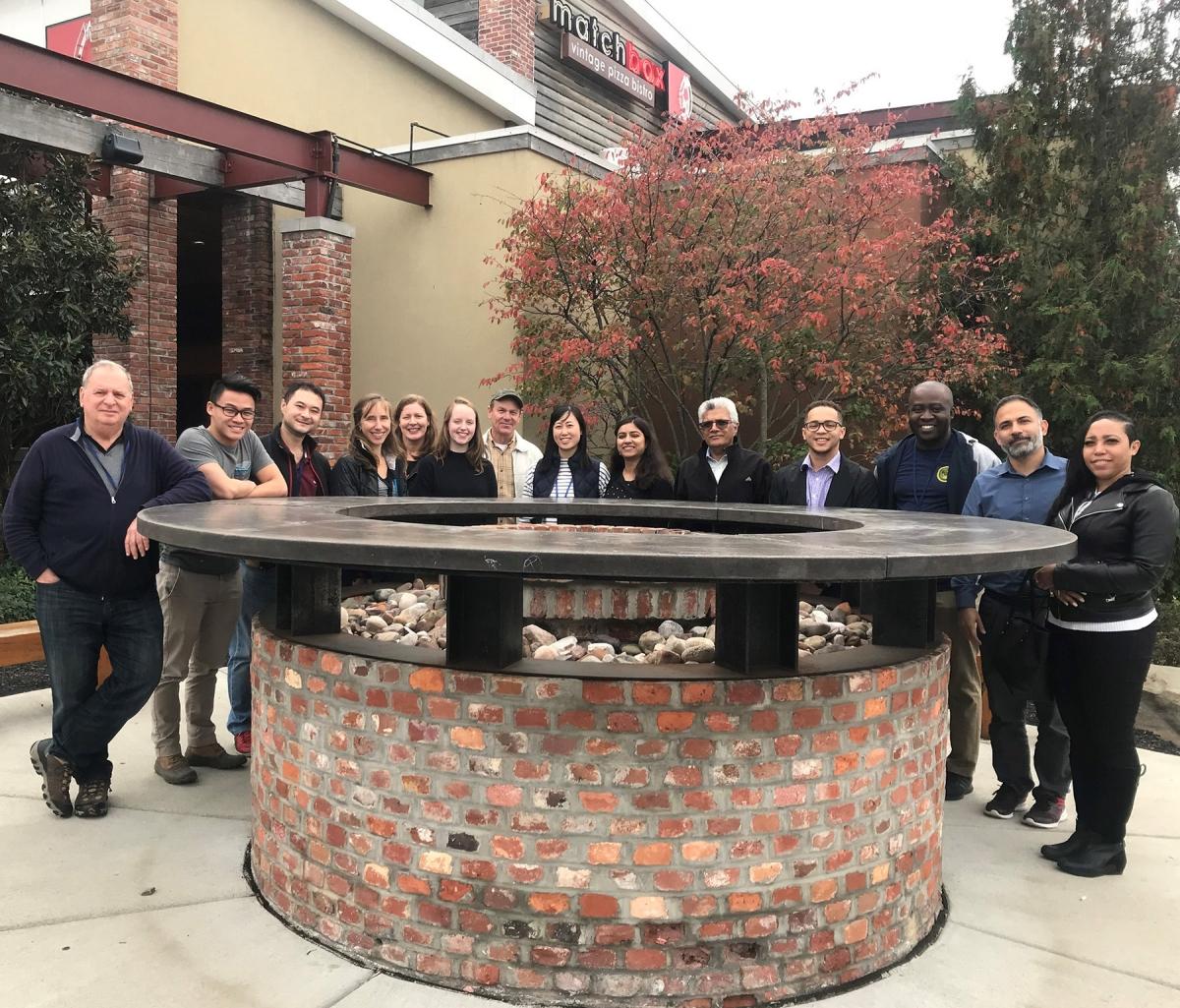 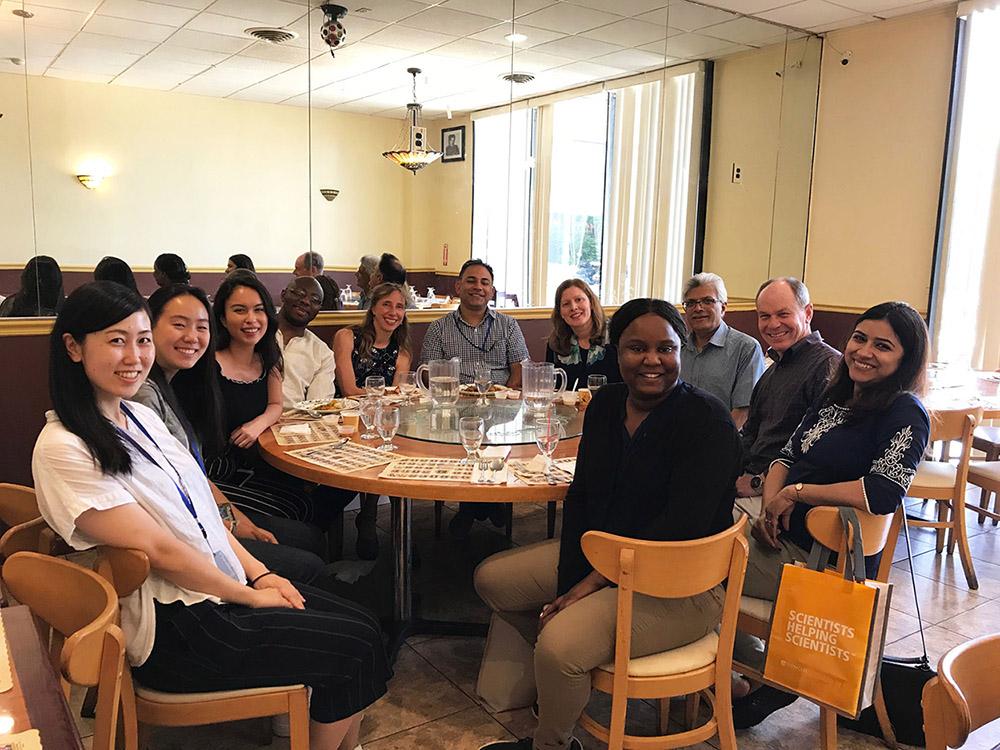 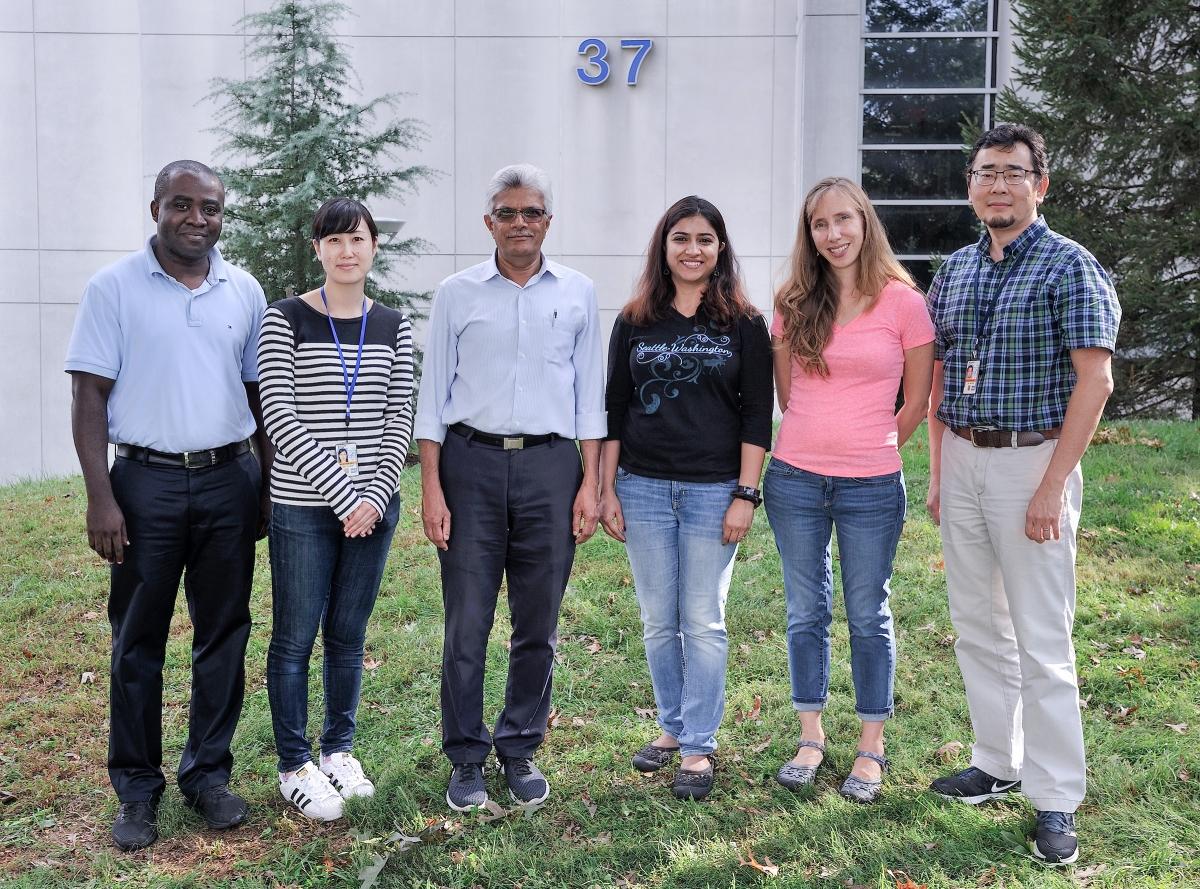 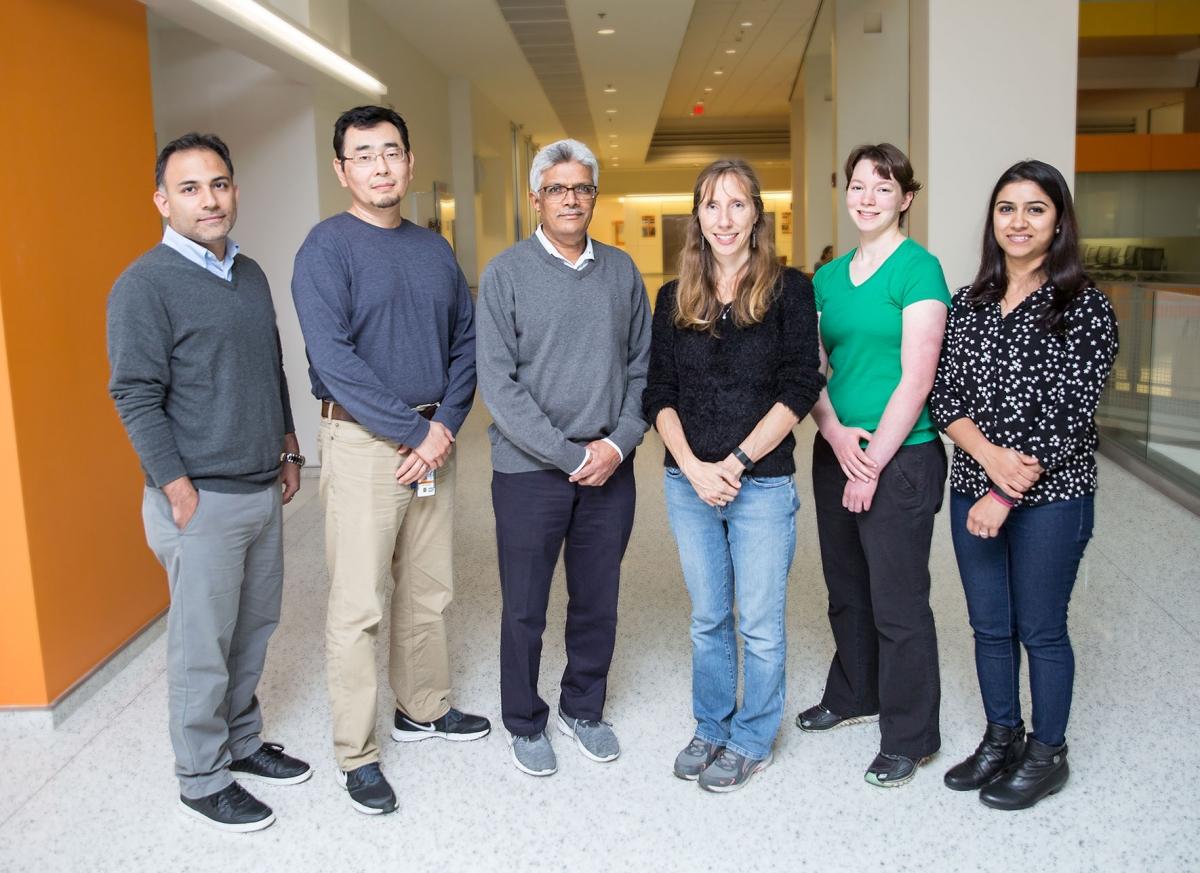