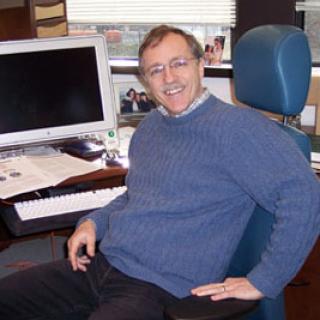 Dr. Maurizi conducted seminal studies uncovering the presence and importance of multi-component ATP-dependent proteases in bacterial cells. His biochemical and structural studies of Clp protease complexes helped generate current models of the mechanism by which these and other molecular machines recognize, unfold, and degrade intracellular proteins. Current research is focused on N-end rule degradation as a major pathway for cellular protein quality control. As Head of the Biochemistry of Proteins Section Dr. Maurizi directed a multi-disciplinary research program that combined genetics, biochemistry, and high-resolution structural analysis to study the regulatory pathways in which intracellular proteolysis plays a major role and the properties and behavior of the molecular machines that carry out ATP-dependent proteolysis.

Intracellular protein degradation is a major post-translational regulatory mechanism that comes into play in virtually every aspect of the biology of a cell. Crucial roles for protein degradation include timing of the cell division cycle, heat shock and other stress responses, adaptation to changes in nutrient availability, cell signaling mechanisms and developmental changes, response to DNA damage, viral infections, and cell death pathways. Protein degradation also serves a vital function in protein quality control, removing mistranslated, damaged, denatured, and otherwise abnormal proteins from cells. Protein quality control by proteases is accomplished in partnership with molecular chaperones. Together, chaperones and chaperone-protease complexes constitute a triage system to direct abnormal proteins into repair or destruction pathways.

Most intracellular proteolysis is performed by ATP-dependent proteases, which combine a chaperone and a protease activity in a large multi-subunit complex. Our studies focused on the ATP-dependent proteases from Escherichia coli (E. coli) and their close homologs in mammalian mitochondria. There are remarkable parallels in composition and structure between the E. coli ATP-dependent proteases and those of higher organisms, including the 26S proteasome, the major ATP-dependent protease in the cytosol of eukaryotic cells, and these structural parallels underlie mechanistic principles that are common to all ATP-dependent proteases. ATP-dependent protease complexes contain at least two types of enzymatic functions, an ATP-dependent protein unfoldase, referred to as the chaperone component, and an endopeptidase, referred to as the protease component. The complexes can also contain one or more auxiliary components, such as adapters that recognize specific sequence or chemical motifs in substrate proteins or processing enzymes that modify bound substrates to facilitate further processing. The chaperone and protease functions are contributed by separate structural domains, which may be connected tandemly in a single polypeptide, as in the E. coli proteases, Lon and FtsH, or non-covalently assembled from different polypeptides, as in the Clp proteases and the proteasomes. The protease domains are arranged so that the proteolytic active sites are sequestered within the multi-subunit assembly and are inaccessible to folded polypeptides and proteins. In a typical reaction cycle with bacterial ATP-dependent protease complexes, an adapter binds a protein substrate and hands it off to the chaperone component, which uses the energy of ATP hydrolysis to unfold the protein and then either releases the protein allowing it to refold or translocates the unfolded protein into the protease component, where it is degraded. Thus, substrates are kinetically partitioned between degradation and release depending on intrinsic properties of the substrate or on extrinsic factors that favor one or the other pathway. Binding, unfolding, and release of substrates are controlled by cycles of binding and hydrolysis of ATP and release of ADP.

The mechanistic details of these processes have been extensively investigated. Crystal structure analysis of ClpA and the chaperone domains of other ATP-dependent proteases have shown that their nucleotide binding modules belong to the AAA+ superfamily (ATPases associated with various cellular activities). AAA+ proteins are molecular machines involved in dynamic conformational reconfiguration of macromolecular complexes. The AAA+ module is designed to couple ATP hydrolysis to conformational changes in the chaperone that exert mechanical forces on the bound substrate protein causing it to unfold. When the chaperone exerts the coordinated forces in a vectorial manner, substrate proteins can be translocated along or through other macromolecules. For ATP-dependent proteolysis to occur, both the structural disruption and translocation activities are required, because the proteolytic sites of ATP-dependent proteases lie within internal chambers in the center of the chaperone-protease complex. In the ClpP protease and the proteasome, two rings of seven subunits interact to enclose a proteolytic chamber accessible only through narrow channels along the seven-fold symmetry axes. ClpP associates with either of two related chaperones, ClpA or ClpX, which form six-membered rings and bind on both faces of the double ClpP ring forming a structure resembling two stacked barrels. The ClpA and ClpX unfoldases operate by similar mechanisms to unfold and translocate proteins but recognize different classes of substrates via different specific adapters with which they interact.

An entire reaction cycle, which includes substrate binding, unfolding and translocation, and complete degradation, occurs in just 5-10 seconds for a 30 kDa substrate protein. Electron microscopic imaging has shown that substrates initially interact on the apical surfaces of the complexes, which are swept by flexible N-terminal domains of the chaperone components. The flexible N-terminal domains can interact directly with substrates, but they also contain binding sites for the various adaptors that assist in bringing substrates into close proximity with the axial channels. To be unfolded a substrate must have a structurally accessible region, usually a polypeptide segment near the N- or C-terminus that can penetrate part way into the axial channel and engage binding sites that line the channel. Functionally important polypeptide binding sites are located on mobile loops that move in a controlled manner within the lumen of the channel in response to cycles of ATP hydrolysis. Coordinated movement of the binding loops exerts a mechanical force on the substrate polypeptide chain causing collapse of its tertiary structure, and subsequent incremental movements of the axial loops translocate the extended polypeptide through the channel. Our laboratory worked to obtain additional high-resolution structural data to go with biochemical and mutagenesis studies aimed at a better understanding of how substrates interact with the different conformations of the chaperone during unfolding and translocation and during entry into the proteolytic chamber.

Structure and Functional Properties of the Active Form of the Proteolytic Complex, ClpP1P2, from Mycobacterium tuberculosis 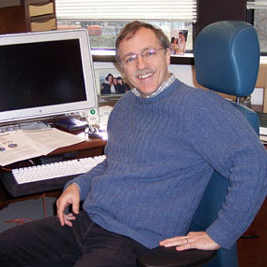 Dr. Maurizi received his Ph.D. in biochemistry from the University of Illinois and completed postdoctoral studies with Earl Stadtman and Ann Ginsburg in the National Heart, Lung, and Blood Institute at the NIH. Dr. Maurizi began his work on energy-dependent proteases in collaboration with Susan Gottesman in the Laboratory of Molecular Biology, NCI, before joining the staff of the Laboratory of Cell Biology in 1991.

Dr. Maurizi retired as a Senior Investigator in 2016 and is now an NIH Scientist Emeritus.