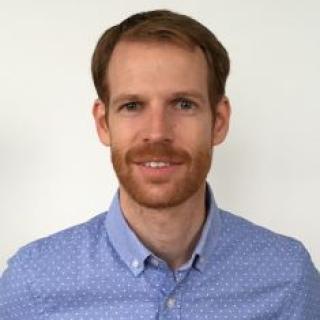 Michael Aregger’s research focuses on how cancer cells rewire gene expression and metabolism in order to adapt to changing environmental conditions. Towards this, he has developed CRISPR-Cas based screening technologies that afford the systematic perturbation of multiple genes and genetic segments and that can be coupled with various phenotypic readouts. Dr. Aregger’s laboratory applies those genome engineering tools and functional genomics approaches in order to reveal genetic interactions and cancer dependencies, and to identify regulators of metabolic plasticity in cancer cells.

A major goal of biomedical research is to reveal genetic dependencies and cellular processes cancer cells rely on in order to exploit them therapeutically. The development of CRISPR-based genome editing technologies have opened the door for efficient perturbation of mammalian genomes and, as such, provide powerful tools for exploring genotype-to-phenotype relationships. Importantly, the combination of CRISPR technology with functional genomics approaches can be harnessed to systematically identify genetic dependencies and cancer vulnerabilities across diverse cell lines and growth conditions. Michael Aregger’s research aims to expand our understanding of how cancer cells dynamically regulate gene expression and cellular metabolism in response to changing environmental conditions, and to use this knowledge to identify genetic liabilities that may present novel targets for combinatorial cancer therapeutic approaches.

A common feature of many cancers is the reprogramming of cellular metabolism in order to fuel tumorigenesis. Importantly, this rewiring is highly plastic allowing cancer cells to adapt to various tumor microenvironmental stress conditions. In our lab we apply cutting-edge functional genomics methodologies along with transcriptomics, proteomics and focused biochemical approaches to investigate how metabolic plasticity is regulated and what genetic vulnerabilities arise in cancer cells in response to various environmental stress conditions.

2. Identification of context-dependent fitness genes across genetic and environmental backgrounds

In order to identify genes whose function underlie cell proliferation and survival we have developed various CRISPR-based screening technologies for the systematic knockout of genes in human cells. Our genome-wide CRISPR-Cas9 screens expanded the set of human fitness genes and revealed distinct genetic signatures that can be used to predict differential drug response of cancer cells. In our lab we are using similar CRISPR screening approaches to uncover genetic vulnerabilities in cancer cells and study how different environmental conditions influence dependencies on certain cellular pathways.

Genetic interactions occur when mutations in two or more genes result in a phenotype that deviates from the predicted combinatorial effect of perturbing those genes. The mapping of such genetic interactions can provide profound insights into the functional wiring and plasticity of cells, predict novel gene functions, and highlight critical genetic dependencies that may be exploited therapeutically to treat diseases such as cancer.

Using co-isogenic cell lines we interrogated the genetic interaction landscape of lipid metabolism. Our work shed light on the mechanistic basis for cellular adaption to loss of de novo fatty acid synthesis and uncovered a previously uncharacterized gene as a novel regulator of exogenous lipid uptake, demonstrating the power of systematic genetic interaction mapping for functionally annotating the genome.

To expand our tools to map genetic interactions we developped CHyMErA (Cas Hybrid for Multiplexed Editing and Screening Applications), a CRISPR-based combinatorial screening platform for the perturbation of multiple genes. CHyMErA is based on the co-expression of Cas9 and Cas12a nucleases in conjunction with a hybrid guide RNA (hgRNA) engineered by the fusion of Cas9 and Cas12a guides and expressed from a single U6 promoter. We have applied CHyMErA for the dual-targeting of single genes, the mapping of genetic interactions between paralogs, and for exon-resolution functional genomics in mammalian cells. In our lab we continue exploring CHyMErA as a powerful tool to uncover genetic interactions and dependencies between various cellular pathways.

We have a strong interest in developing and applying cutting-edge CRISPR-based technologies and continue exploring various Cas modalities and effector domains for our screening applications. Furthermore, we are also expanding the readouts for our screening platforms in order to assess genetic dependencies across more information-rich phenotypes.

The Aregger group is looking for enthusiastic lab members who wish to explore genetic interactions and metabolic dependencies in cancer cells. We currently have openings for Postdoctoral Fellows. If you are interested in our work, please send your C.V., a short statement of research interests and contact details of 2-3 references to michael.aregger@nih.gov. 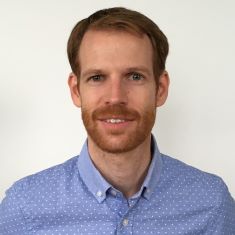 Dr. Michael Aregger obtained his Bachelor’s degree in Biology from the University of Basel, Switzerland in 2006 before earning his Master’s degree in 2008. In 2014, Dr. Aregger obtained his Ph.D. from the University of Dundee in Scotland where he worked in Prof. Victoria Cowling’s laboratory studying the regulation of mRNA cap methylation in human cells. For his postdoctoral research, he joined Prof. Jason Moffat’s laboratory at the University of Toronto in Canada to study genetic vulnerabilities and interactions in human cells. Dr. Aregger’s postdoctoral research has been recognized with multiple fellowships and awards, including the Donnelly Centre Research Excellence Award (2019) and two postdoctoral fellowships from the Swiss National Science Foundation (2014, 2016). In 2020, Dr. Aregger joined the RNA Biology Laboratory at the National Cancer Institute in Frederick, MD as a Staff Scientist in the Functional Transcriptomics Section lead by Thomas Gonatopoulos-Pournatzis. In fall 2021 Dr. Aregger joined the Molecular Targets Program at the National Cancer Institute as a NIH Stadtman Investigator to establish the Functional Genomics Section. His lab focuses on applying functional genomics approaches to explore genotype-to-phenotype relationships, gain insights into the plasticity of cancer cells and to identify genetic dependencies that may present novel therapeutic targets. 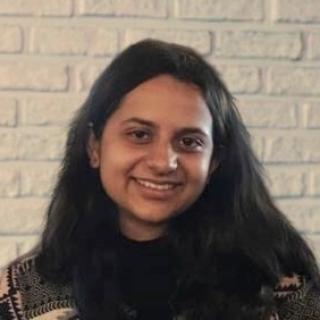 December 2022 - Welcome to Bandana Kumari who is joining our lab and the group of Dr. Gonatopoulos-Pournatzis as a computational PostDoc.

October 2022 - We're excited to further extend our team and to welcome Chelsee Holloway who is starting her PostDoc in our group.

September 2022 - Our group has been awarded a Pamela Anne Cafritz Renal Cell Carcinoma Award for the mapping of genetic interactions in patient-derived cancer models to uncover novel therapeutic targets for Renal Cell Carcinomas. We’re very grateful for the generous support of our research by the NCI's Center for Cancer Research and our collaborators Marston Linehan and Barry O'Keefe!

August 2022 - A warm welcome to Swati Sharma who joins our team as a PostBac student.

May 2022 - We welcome Anna Riordan who joins our group for a NIH Summer Internship.

May 2022 - Congratulations to Belene for winning a poster prize at the 2022 Virtual Postbac Poster Days!

October 2021 - The Aregger lab has officially opened. Welcome to the team Belene and Tyler and thanks everyone for the warm welcome at the MTP and NCI-Frederick! 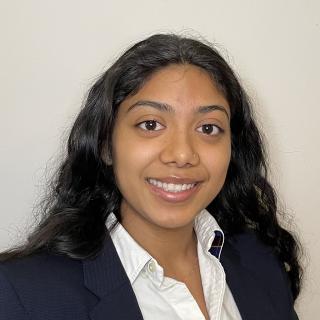 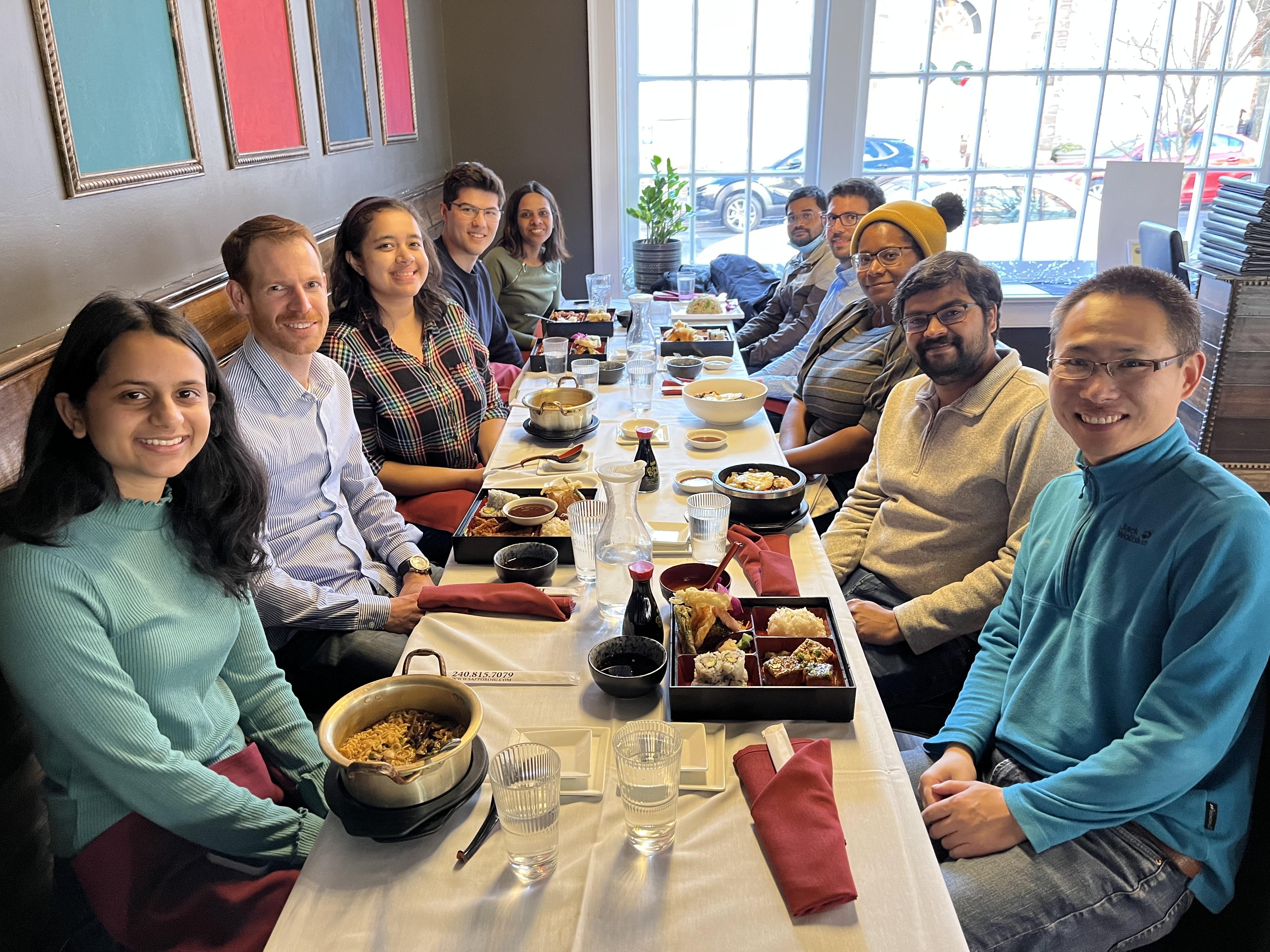 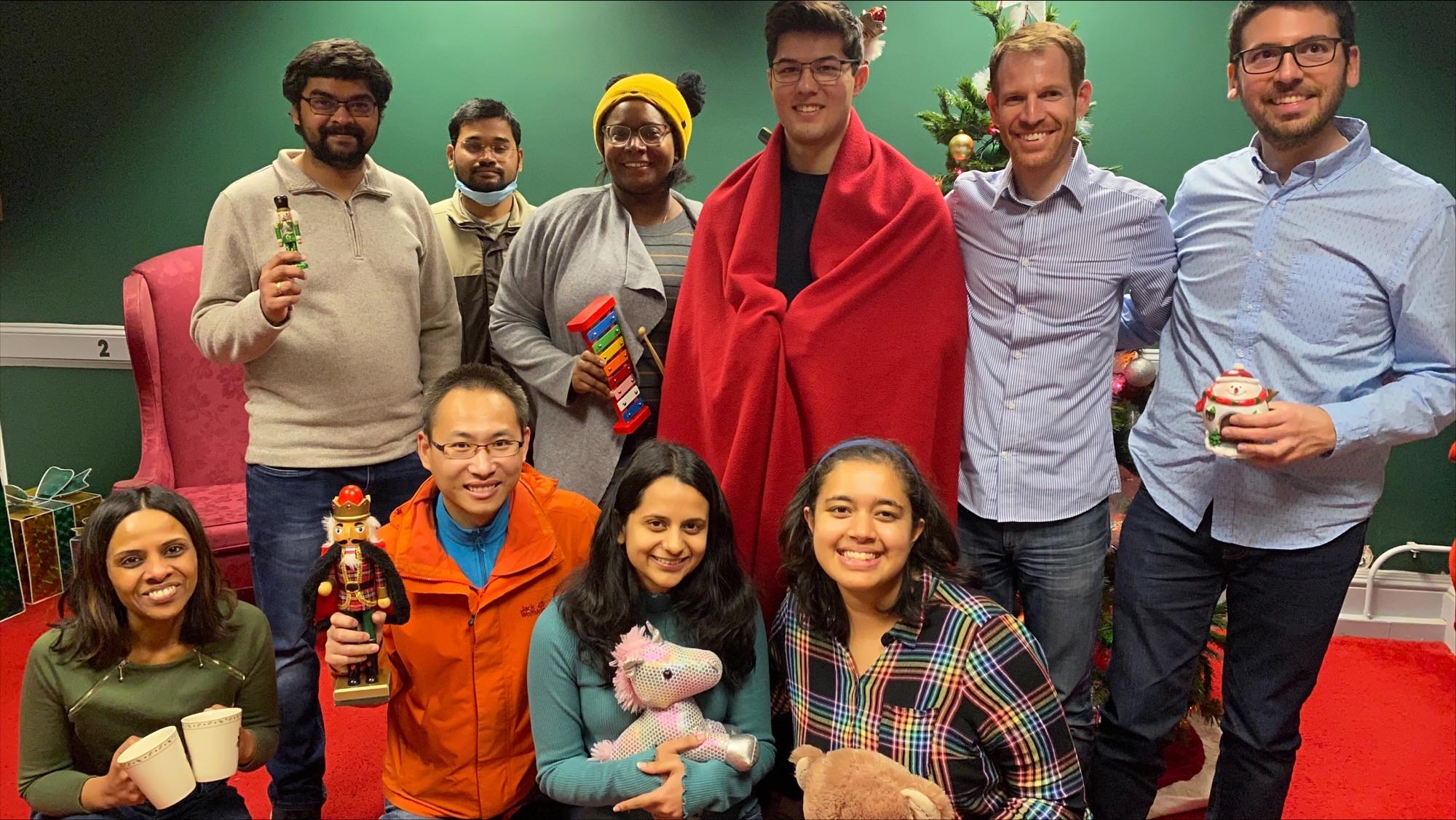 Successs, we're happy to report that we managed to find Santa's list of gifts and escaped the Great Santascape room on time! Shreya proved herself as the master mind of the group while Chelsee showed great musical talent ;-) 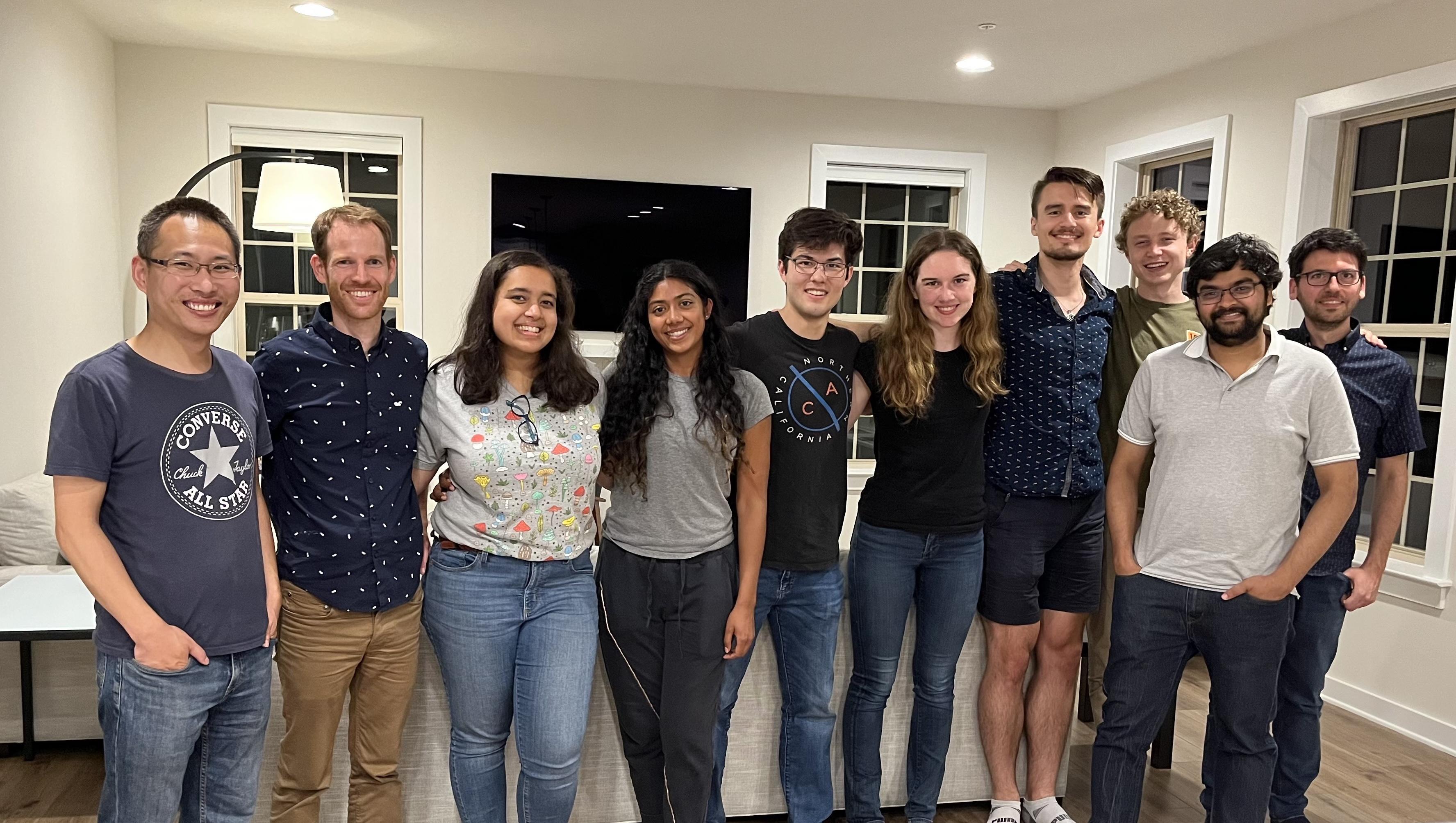 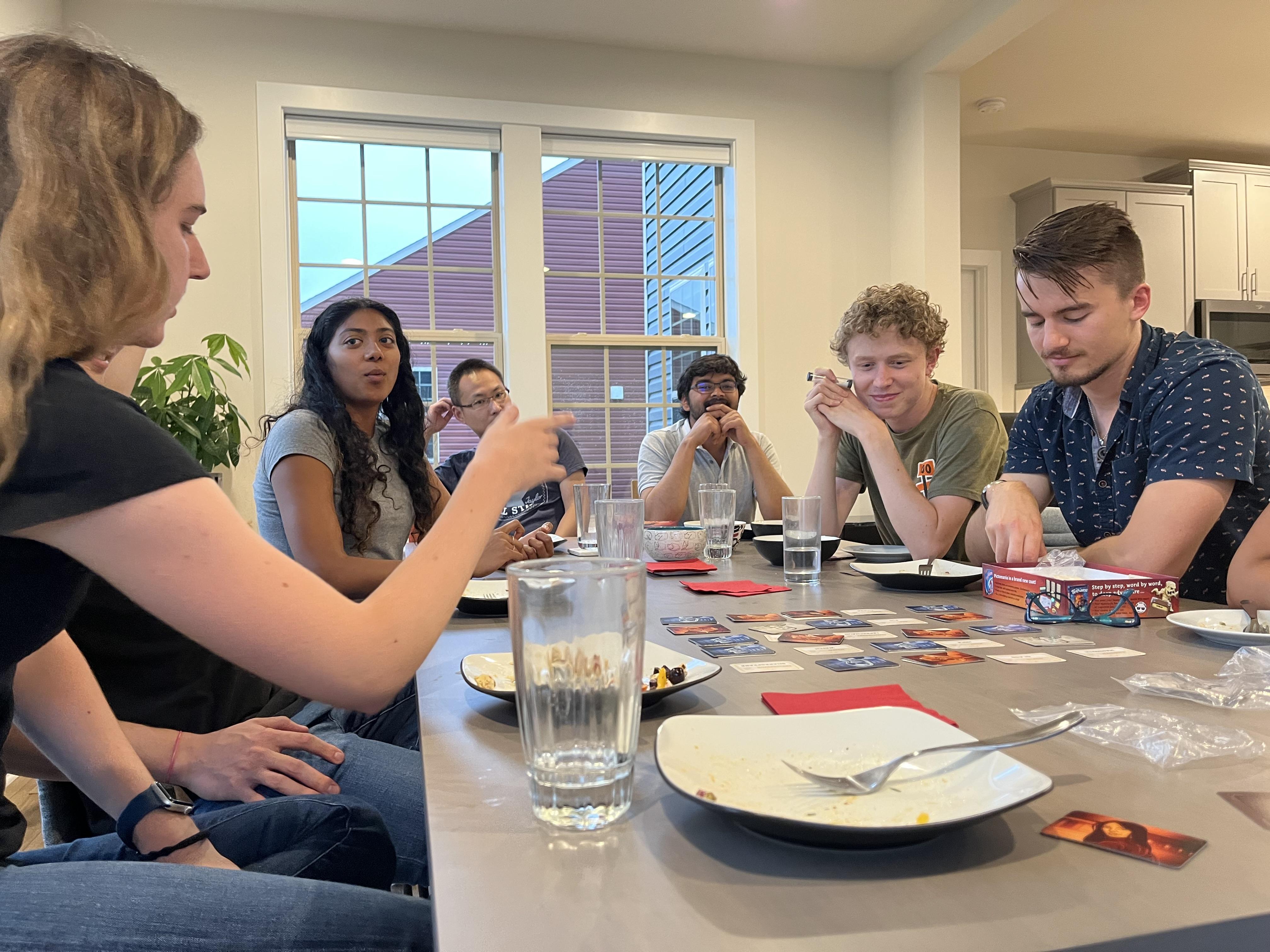 At the same time we also wished farewell to our PostBac students Ethan and Belene as well as our summer student Anna.