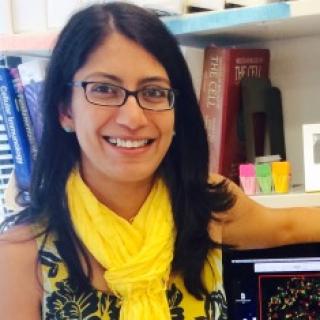 Dr. Lakshmi Balagopalan is interested in the molecular events that follow activation of T cells via the T cell antigen receptor (TCR). Dr. Balagopalan is particularly focused on LAT, a molecule that plays a central role in T cell activation downstream of the TCR by directly or indirectly recruiting kinases, effectors, and adaptors to facilitate signal transduction pathways. Specifically, she is interested in mechanisms by which LAT is recruited to sites of T cell activation, and the cellular trafficking itinerary of LAT post-activation.

We are interested in the molecular events that follow activation of T cells via the T cell antigen receptor (TCR). TCR stimulation triggers several events including activation of protein tyrosine kinases (PTKs), phosphorylation of multiple protein substrates and formation of signaling complexes. Using signaling molecules tagged with GFP analogs investigators in the lab have observed the rapid formation of signaling clusters composed of multi-molecular signaling complexes at the site of TCR engagement.

One of the molecules recruited to signaling clusters and of great interest to the lab is LAT. LAT plays a central role in T cell activation downstream of the TCR by directly or indirectly recruiting kinases, effectors and adaptors to facilitate signal transduction pathways. In addition, we have demonstrated that LAT is ubiquitinated and that LAT ubiquitination is a molecular checkpoint for attenuation of T cell signaling. We are interested in investigating the mechanism by which LAT ubiquitination regulates T cell signaling. Furthermore, to investigate the role of LAT ubiquitination in vivo, we have generated transgenic mice expressing WT and ubiquitin-defective 2KR LAT in postthymic mature T cells. We want to evaluate whether enhanced signaling in cells expressing ubiquitination-resistant LAT will augment responses to pathogens or tumor.

Cutting edge: cell surface linker for activation of T cells is recruited to microclusters and is active in signaling

Endocytic events in TCR signaling: focus on adapters in microclusters 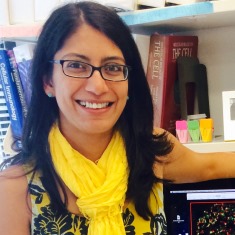 Dr. Lakshmi Balagopalan began her scientific career as a student researcher in the Genetics Research Program at the University of Calcutta, India. She learned how to handle flies as a student volunteer at the Center for Cellular and Molecular Biology (CCMB), Hyderabad, India, before she joined the genetics graduate program at Pennsylvania State University in 1997. She earned her Ph.D. studying the role of genes involved in myogenesis and myoblast fusion in Drosophila melanogaster. In 2003 she joined the Laboratory of Cellular and Molecular Biology at NCI as a Cancer Research Training Award (CRTA) postdoctoral fellow. She was promoted to research fellow in 2006 and staff scientist in 2011. Dr. Balagopalan is an active member of the Staff Scientist and Staff Clinician (SSSC) community at CCR, serving as section editor of the SSSC newsletter (The Dossier). She is the recipient of several awards, including the Federal Technology Transfer Award and the NCI Director's Innovation Award.