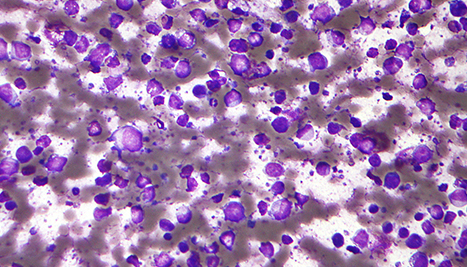 A phase III clinical trial found that adding the drug ibrutinib to a standard chemotherapy regimen for treating diffuse large B-cell lymphoma was beneficial for patients under the age of 60 but not for those 60 years of age or older. The results, published March 22, 2019, in the Journal of Clinical Oncology, provide some long-sought clarity on which subsets of lymphoma patients benefit most from ibrutinib.

Diffuse large B-cell lymphoma (DLBCL) is the most common type of lymphoma, accounting for up to 40 percent of cases worldwide. It is often treatable with aggressive cycles of chemotherapy, with a standard regimen consisting of rituximab, cyclophosphamide, doxorubicin, vincristine and prednisone (R-CHOP). However, some patients do not respond to this initial form of treatment.

Therefore, researchers have been studying newer types of drugs that disable key proteins that sustain the survival of B cells, the type of cell that becomes malignant in lymphoma. The cancerous cells are killed by some of these agents, including the drug ibrutinib.

When Louis Staudt, M.D., Ph.D., Co-Chief of CCR’s Lymphoid Malignancies Branch, and his colleague Wyndham Wilson, M.D., Ph.D., tested ibrutinib in a phase I clinical trial in 2010, they found that 3 of the ten patients in the study responded very well to the drug. Results from a second trial with 70 people revealed that patients with a subtype of DLBCL, called activated B-cell-like (ABC), were more likely to benefit from treatment with the drug, compared to patients with another subtype, called germinal center B-cell-like (GCB).

Following up on these results, Drs. Staudt and Wilson are senior authors on a study conducted by Janssen that tested ibrutinib in a phase III trial involving patients with DLBCL, excluding those with the GCB subtype. In total, 838 patients were recruited from 28 countries around the globe.

Half of the patients were given a typical R-CHOP regimen while the other half were given R-CHOP plus ibrutinib. “Something very important emerged from analyzing the clinical parameters, which was that there was a strong relationship between age and response to ibrutinib,” says Dr. Staudt. “If you were younger than 60, your overall survival was significantly improved by the addition of ibrutinib.”

However, patients over the age of 60 fared worse if they received ibrutinib, as they were more likely to experience severe side effects and had to stop their treatment early.

“There are going to be studies that enroll just younger patients to test the effect of ibrutinib in subsequent trials,” Dr. Staudt says. “There are also some closely related drugs that inhibit the same mechanism, and they are being tried in younger individuals based on the results of this trial.”