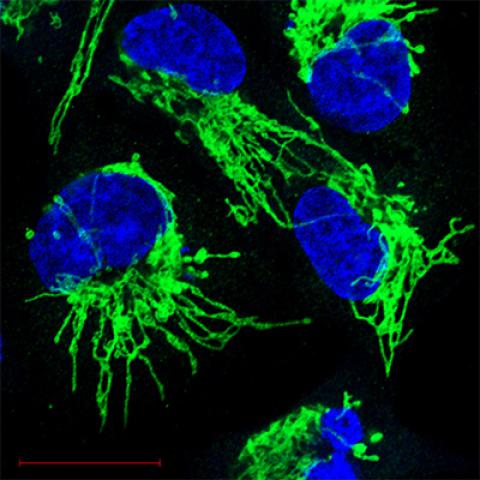 CCR researchers and their colleagues collaborated to uncover the role that a protein named LZTR1 plays in altering signaling of a cancer-promoting pathway involving the RAS protein. This change results in the dysregulation of ubiquitination, a process where a small protein called ubiquitin attaches to a protein that is altered by an enzyme. Modifications in the LZTR1 protein have been associated with diseases such as glioblastoma and pediatric neoplasms. The study was published in Science on November 15, 2018.

The research evolved as a collaboration between CCR structural biologists and cancer biologists located in laboratories worldwide. The structural biologists used computer technology to   model several possible hypotheses and then performed molecular dynamics simulations to see which could explain the alteration mechanism. According to Ruth Nussinov, Ph.D., Senior Investigator, Cancer and Inflammation Program, the approach proved to be quite effective.

“We suspected that the alteration was caused by changes to the attachment of RAS to the membrane, normally taking place by ubiquitination,” Nussinov explained. “To elucidate how this occurs, the team looked closely at the action performed by the LZTR1 protein.”

Using an array of new experimental techniques, the team set out to learn more about this protein. An important step involved trapping protein complexes from intact mammalian cells, which led to the identification of an enzyme component of RAS as the substrate for the LZTR1 complex. Further investigation revealed that the LZTR1 complex, composed of LZTR1 and the cullin 3 ubiquitin ligase (LZTR1-CUL3), mediates RAS ubiquitination.

Ubiquitination is sometimes called the “kiss of death” for a protein because the process tends to degrade it. But in this case, the researchers found little evidence of degradation, leading them to suspect that another mechanism was at work. “We looked back at our hypothesis, which said that the membrane was the reason,” said Nussinov.

Further analysis showed how the LZTR1 complex is implicated in causing dysregulation in RAS ubiquitination. The complex can inhibit RAS signaling by weakening its association with the membrane. Furthermore, mutations in the LZTR1 gene can disrupt the formation of a LZTR1 complex or its interaction with RAS proteins. Dysregulation caused by any of these factors can lead to human disease.

Identifying this unique mechanism is the first step in uncovering new therapeutic approaches such as RAS pathway inhibitors. Further work is needed to learn more about the role of LZTR1 in the development of cancer and other diseases.