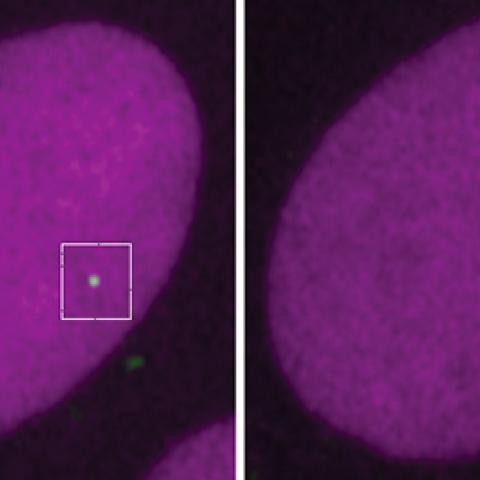 With unprecedented detail, researchers have observed where and when the protective casing around the human immunodeficiency virus (HIV-1) is shed inside a human cell, which is an observation that overturns the conventional understanding of how the virus infects cells and replicates. The finding was published February 24, 2020, in the Proceedings of the National Academy of Sciences (PNAS) USA.

“Understanding how HIV-1 replication occurs can provide valuable insights into essential interactions between the virus and the host cell,” explains Vinay K. Pathak, Ph.D., Senior Investigator in the Retroviral Replication Laboratory, part of the HIV Dynamics and Replication Program.

Despite the importance of understanding how the virus infects human cells, many details about this process have remained unknown. Until now, many scientists suspected that the protective casing around the virus, called the viral capsid, was shed before the virus enters the center of a human cell, called the nucleus. Once inside the nucleus, the virus begins to replicate itself.

Unexpectedly, they found that the viral capsid remained essentially intact after entering the nuclei of cells. They also identified a key protein called CPSF6 that helps facilitate the transport of the virus, including its capsid, through the pores of a nucleus.

“We hope that the insights gained in our studies will help to identify critical molecular interactions between the virus and the host that will facilitate the development of new classes of potent anti-retroviral drugs,” says Pathak.

However, he notes, this study raises many unanswered questions. It’s still a mystery, for example, on how the full virus (capsid included) at a diameter of roughly 61 nanometers can squeeze through the pore of a human nucleus, which is only about 39 nanometers wide. More research is needed to understand how this happens and to identify the mechanisms that help trigger the virus’s uncoating process.

Learn more about our work in HIV/AIDS: