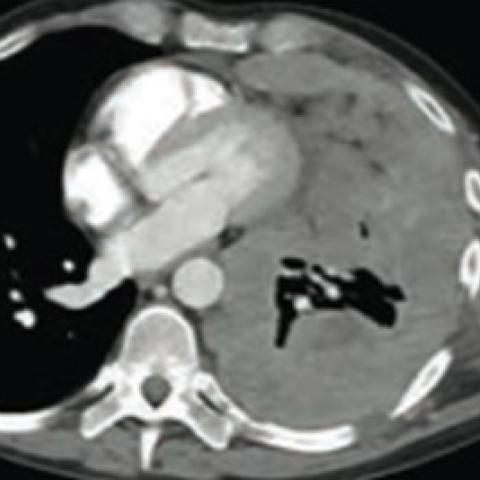 Malignant mesothelioma is an aggressive tumor that originates in the mesothelial cells that line various organs and cavities in the body. Patients with pleural mesothelioma, which arises from the mesothelial cells lining the lungs, only live about 12 to 16 months following platinum chemotherapy, the first-line standard of care for this disease. CCR investigators led by Raffit Hassan, M.D., Chief, Thoracic and GI Malignancies Branch, have discovered that patients with malignant mesothelioma with heritable mutations in DNA repair genes, including BAP1, have significantly longer overall survival following platinum chemotherapy than those without such mutations, which may have implications for screening and treatment.

In a study published in the Proceedings of the National Academy of Sciences on April 10, 2019, Hassan and his team conducted a genetic analysis of tissue from 434 patients with malignant mesothelioma. These patients were seen at the Thoracic Medical Oncology Clinic of NCI and at the University of Chicago Medicine Mesothelioma Clinic from 2013 to 2017. They were enrolled in the study regardless of their risk factors for the disease, such as age at diagnosis, family history of cancer or exposure to asbestos. The researchers wanted to focus on germline, or inherited, mutations as earlier, small studies had suggested that patients with germline mutations in BAP1had an increased risk of developing mesothelioma.

Consistent with these studies, among the 385 patients who had received platinum-based chemotherapy, those who had germline mutations in BAP1or other DNA repair genes had significantly better overall survival than those without the mutations. This held especially true for patients with pleural mesothelioma. Patients with pleural mesothelioma who had germline mutations in BAP1 and other genes had a median survival of 7.9 years, while those without the mutations had a median survival of 2.4 years. The researchers noted that the mutations may impair cancer cells’ ability to repair the DNA damage caused by platinum chemotherapy, making them more sensitive to these agents.

Ovarian, breast and prostate cancer patients who carry DNA repair gene mutations in both germline cells and somatic cells, cells other than egg and sperm cells, are especially sensitive to a class of drugs called PARP inhibitors. In this study, patients with malignant mesothelioma recruited from NCI’s Thoracic Medical Oncology Clinic who carried germline BAP1 mutations also had additional somatic mutations likely resulting in complete loss of BAP1function, suggesting they, too, could be sensitive to PARP inhibitors. Hassan’s team is testing this hypothesis in a currently enrolling clinical trial of the PARP inhibitor olaparib in mesothelioma patients.

Patients with germline BAP1 mutations were also more likely than those without germline mutations to have a prior personal history of melanoma, bladder cancer or any cancer, as well as more likely to have a family history of ocular melanoma, breast cancer or mesothelioma. These findings support germline testing in all mesothelioma patients, which could enable early detection and treatment of other cancers in patients and their family members, Hassan notes.

Overall, his team’s research may lead to shifts in clinical practice, pointing to potential personalized approaches to a disease with few effective treatment options.