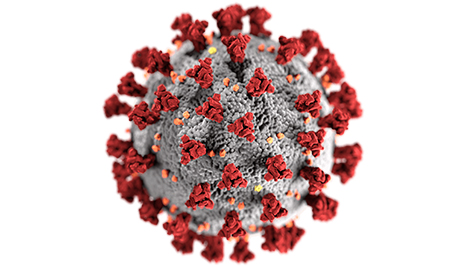 CCR researchers, working with scientists from the National Center for Global Health and Medicine Research Institute in Tokyo and Purdue University in Indiana, have identified a compound that binds to an essential enzyme of SARS-CoV-2, the coronavirus that causes COVID-19. In laboratory experiments, the compound inhibits the virus’ ability to infect and destroy cells, suggesting that with further development and testing, it might be an effective treatment for people with the disease.

Efforts are underway worldwide to develop treatments for COVID-19 as well as a vaccine to protect against SARS-CoV-2 infection. Because their safety and efficacy can be tested more quickly than vaccines, novel therapies have the potential to have a major impact on the course of the current pandemic, says Robert Yarchoan, M.D., Chief of CCR’s HIV and AIDS Malignancy Branch (HAMB). “If we can get a good enough therapy so that SARS-CoV-2 is converted from a deadly virus to one that can be effectively treated, I think that will really be a game changer,” he says.  “This is what happened with AIDS, a disease for which we still don’t have an effective vaccine.”

Identification of the new compound, GRL-0920, began as a collaboration between Hiroaki Mitsuya, M.D., Ph.D., Senior Investigator in CCR’s HAMB as well as Director of the National Center for Global Health and Medicine Research Institute in Tokyo, and Arun K. Ghosh, Ph.D., a medicinal chemist at Purdue University.

Previously, Mitsuya and Ghosh had worked together to develop drugs against HIV (including the widely used protease inhibitor darunavir). Ghosh also worked on SARS-CoV-1, the virus that caused the severe acute respiratory syndrome (SARS) disease that broke out in 2003.  Both HIV and SARS viruses produce protein-cleaving enzymes, or proteases, that are essential for viral replication and are considered good drug targets.

During the 2003 outbreak of SARS, Ghosh developed protease inhibitors designed to target SARS-CoV-1’s main protease, M-pro. M-pro snips apart proteins that the virus synthesizes in a continuous chain, freeing the individual proteins that the virus needs to replicate. Without it, SARS-CoV-1 cannot produce new copies of itself. The 2003 SARS epidemic was eradicated by public health measures and subsequently protease inhibitors for SARS-CoV-1 were put aside. But when the COVID-19 pandemic arose, researchers discovered that SARS-CoV-2 uses a similar protease.

Mitsuya and Ghosh tested their SAR-CoV-1 protease inhibitors, along with several closely related, newly synthesized molecules, against the new virus. They found that GRL-0920 (one of the new molecules), blocked SARS-CoV-2’s ability to infect cells in laboratory tests. It also effectively blocked the destruction of these cells by SARS-CoV-2.

Haydar Bulut, Ph.D., a postdoctoral fellow in Mitsuya’s CCR lab, prepared a purified solution of the SARS-CoV-2 protease so the team could investigate how it interacts with GRL-0920. Biochemical analyses by David Davis, Ph.D., a staff scientist in Yarchoan’s lab, and structural modeling by Debananda Das, Ph.D., a staff scientist in Mitsuya’s lab, confirmed that the compound binds to the viral protease and could fit into a pocket that is critical for its activity.

The team reported their findings August 20, 2020, in MBio. They will use this knowledge to further develop GRL-0920, modifying its structure to optimize its interaction with the viral protease. The resulting compound will need to be tested, first in animals and then in people, to determine whether it is an effective therapy for COVID-19.