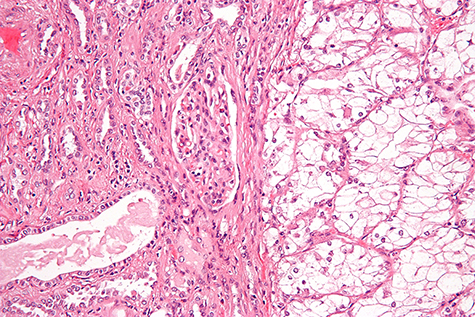 A phase III international clinical trial tested the combination therapy of nivolumab, a checkpoint inhibitor, and cabozantinib, a targeted therapy, against the targeted therapy of sunitinib alone in patients with advanced, untreated renal cell carcinoma. Researchers found that the combination therapy was significantly more effective at prolonging life without the cancer progressing.

Andrea B. Apolo, M.D., Lasker Clinical Research Scholar in CCR’s Genitourinary Malignancies Branch and Director of the Bladder Cancer and Genitourinary Tumors Multidisciplinary Clinic, spearheaded this work, beginning with research in the lab and culminating with the positive outcomes from this trial.

The combination therapy was approved January 22, 2021, by the Food and Drug Administration and is now a first-line therapy for advanced kidney cancer.

“In looking for agents, I came across cabozantinib, a small molecule-targeted therapy, which had been used in prostate cancer,” she explains. “We tried it with cell lines in the lab and found that it was successful in reversing the activity of the MET/HGF pathway, which is important for cancer progression. When we tried it with mice, cabozantinib decreased tumor size significantly.”

After determining the correct dosage in a phase I clinical trial, Apolo initiated a phase II trial that tested cabozantinib in patients with metastatic bladder cancer who had already received chemotherapy. The positive results of this trial – an overall response rate of 19 percent – were published in Lancet Oncology in 2020. Equally important, however, was the discovery that even though cabozantinib is not an immunotherapy, it had immunomodulating effects, which could interfere with tumor-repression properties. According to Apolo, this finding provided the rationale to pair cabozantinib with nivolumab, a checkpoint inhibitor, and to launch a phase I trial for patients with both bladder and kidney cancer.

“We saw very early that we were getting really nice, beautiful responses from the phase I trial,” Apolo recalls. “At that point, we entered into discussions about this phase III study with our pharmaceutical partners.”

Apolo was on the phase III CheckMate 9ER steering committee that helped the team design the trial. In less than three years, the study, which evaluated the efficacy of cabozantinib with nivolumab in patients with previously untreated clear-cell, advanced renal cell carcinoma, was completed, and the combination therapy was approved as a first-line treatment for advanced kidney cancer the following year.

As with other anti-cancer treatments, this one also has side effects, including fatigue, diarrhea and callous formations on the hands and feet. The therapy can also result in hypertension and weight loss. Fortunately, clinicians can work with patients to mitigate and support them with these side effects.

“The treatment was generally well tolerated, with a low discontinuation rate,” Apolo says. “Patients can also stay on this regimen over the long term or stop and then restart treatment. The responses can be long lasting in some patients.”

With the combination regimen now established for advanced kidney cancer, Apolo is working on a similar study for bladder cancer as well as continuing her work with this combination therapy for rare genitourinary tumors. She is cautiously optimistic that it will be possible to build on this initial work.

“We’re considering whether we can add something to the treatment or try other immunotherapies with different targets,” she says. “This work is still in the preclinical stage.”

Whatever comes next, Apolo is ready for the challenge. “It is a dream come true to conceive of an idea and see it through phase I and then to see it become standard of care,” she says. “Treatment successes like this, which help many patients, are why I went into this field.”