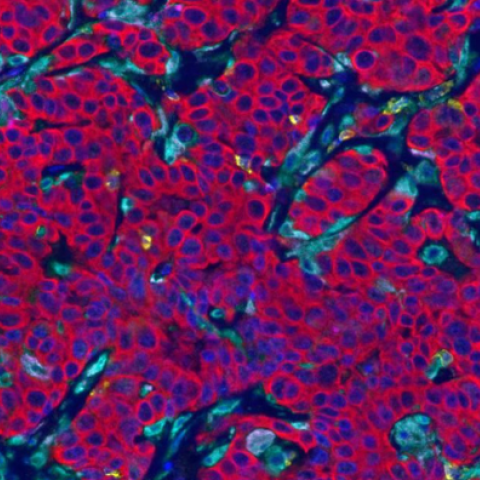 A collection of cancer cells surrounded by immune cells (T cells and macrophages) in a patient not responding to prior therapy.
Image Credit: Houssein Abdul Sater

Some colon and human papillomavirus (HPV)-associated cancers are particularly difficult to treat, but CCR researchers are hoping that a combination of three anti-cancer drugs will lead to better outcomes for patients. The three-pronged approach is being explored in a clinical trial led by Julius Strauss, M.D., Assistant Research Physician in the Laboratory of Tumor Immunology and Biology.

The phase I/II trial that launched August 10, 2021, involves an intriguing combination of immunotherapy and epigenetic manipulation to target and kill cancer cells. Immunotherapy involves boosting the immune system’s ability to fight cancer. Epigenetics, in the context of cancer treatment, involves manipulating the expression of genes mutated in cancer cells to make them more vulnerable to immune system attacks. Preliminary research in animal models suggests that the triple-drug combination is more effective than just one or two of the drugs being administered.

One of the drugs in the study, called bintrafusp alfa, is a type of immune checkpoint inhibitor. These drugs work by taking the brakes off the immune system, making immune cells more active and better able to target and kill cancer cells. However, immune checkpoint inhibitors only work for some cancers, and they tend to be less effective for colon cancers where a microsatellite status is stable – when the number of microsatellite repeats (short, repeated sequences of DNA) is the same in all cells.

Moreover, immune checkpoint inhibitors currently tend to be less effective for HPV-associated cancers, which mainly affect the head and neck or genitalia, that have not responded to other treatments. However, bintrafusp alfa uses other mechanisms to boost immune cell functioning, making them potentially more effective at attacking cancer cells than other checkpoint inhibitors.

Notably, more than 30,000 men and women in the United States are affected by HPV-associated cancers annually. This prompted Strauss and his colleagues to explore which drugs could be combined with immune checkpoint inhibitors for better results. They chose to add the drug entinostat, which counteracts a mechanism that cancer cells use to evade the immune system. Cancer cells are able to produce enzymes that manipulate the expression of certain genes. By doing so, it’s believed that cancer cells make themselves less detectable to the immune system. Entinostat blocks these enzymes, making cancer cells more easily detectable.

The third drug being used in the clinical trial is NHS-IL12, which is an experimental tumor-targeting immunocytokine (IL-12) that boosts the immune system’s ability to fight cancer. NHS-IL12 is expected to complement entinostat well, since it targets a protein in the DNA that is subject to epigenetic changes induced by the latter drug.

Recruitment for the trial is officially underway to determine the safety of the drug combination, correct dosage and to explore whether patients respond to the therapy. If positive results are observed, the trial will be expanded to include more participants.