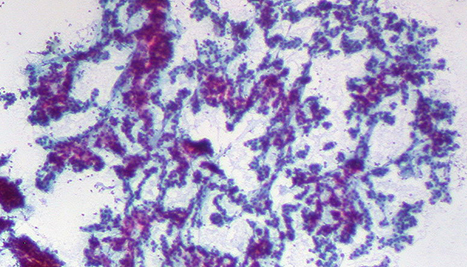 Through a new clinical trial, patients with liver cancer will be given antibiotics along with two drugs to explore whether manipulating microbes within the gut of a patient can boost their immune system’s response to the disease. The trial will determine whether administering the antibiotic vancomycin, in combination with the drugs nivolumab and tadalafil, will lead to cancer regression in patients with liver metastasis or primary hepatocellular carcinoma (HCC).

HCC is an aggressive form of liver cancer that is very difficult to treat, and patients live an average of 6 to 9 months after diagnosis. Researchers are continuing to explore whether drugs that enhance the immune system, called immunotherapies, can be effective for treating the disease, but they are also looking for novel ways to boost a patient’s immune response – perhaps by harnessing the microorganisms within a patient’s own body. Liver metastasis occurs in many patients with tumors of the gastrointestinal tract.

Recent evidence has revealed that microbes residing within animals’ digestive tracts can use signaling proteins to directly influence their host’s immune system. This has prompted researchers to consider whether manipulating a person’s gut microbes could in turn influence their immune system’s ability to target cancer.

Tim Greten, M.D., Senior Investigator in CCR’s Thoracic and GI Malignancies Branch, and his colleagues will explore this possibility in a new clinical trial. Patients will be given the antibiotic vancomycin, which will reduce the amount of Gram-positive bacteria in their guts. Patients will also receive two drugs. One is an immunotherapy drug that received accelerated FDA approval for treating HCC in patients who have been previously treated with sorafenib, called nivolumab. It works by blocking the function of a protein on T cells that limits their activity; administration of the drug therefore boosts the ability of these immune cells to target cancer. The second drug, tadalafil, reduces the amount of myeloid-derived suppressor cells, which are known to suppress T-cell activity.

Dr. Greten and his colleagues are hoping that these three different therapies will have a synergistic effect. By boosting the number of T cells, their ability to target cancer, and reducing the number of cells that impair T-cell functioning, the researchers believe that this combination of drugs has the potential to benefit patients.

“We have a good scientific rationale for why this might work,” says Dr. Greten. He first began exploring this link between gut microbes and the immune system in mice with liver cancer several years ago. The results revealed that administering antibiotics that eliminate Gram-positive bacteria resulted in fewer tumors in the mice with HCC.

Dr. Greten’s research shows that reducing Gram-positive bacteria caused an increase in the amount of natural killer T cells, which then launch an attack on cancer cells in the liver. Although administration of antibiotics affects microbes in the stomach and colon, the liver of mice is constantly exchanging fluid between these organs, which may explain how microbial changes in the stomach and colon could in turn influence the liver environment.

But, so far, the beneficial connection between eliminating Gram-positive bacteria in the gut and fewer liver tumors has only been shown in mice. “The goal for this new clinical study is to confirm the results that we’ve seen in our animal protocols and to develop new concepts for how we can treat patients with tumors in the liver by changing the gut microbiome,” explains Dr. Greten.

Recruitment is now underway, and the phase II trial is expected to be completed by the end of 2022. It will include HCC patients but also those with colon or pancreatic cancer that has spread to the liver.

Over the course of the trial, patients will be monitored for their immune response, tumor response and gut microbe composition. Besides the primary goal of determining how patients respond to the treatment, the researchers will also be evaluating the drug combination for safety and whether it increases patients’ overall survival.

Dr. Greten remains cautious about expecting positive results from the trial as the relationship between gut microbes and cancer treatment in humans remains largely unknown. But if the results previously observed in mice are also observed in this cohort of patients, it could pave the way for a completely novel approach for treating cancer.

Tim Greten, M.D., medical oncologist and gastroenterologist at the Center for Cancer Research in the National Cancer Institute, discusses a phase II clinical trial for patients with primary liver cancer.