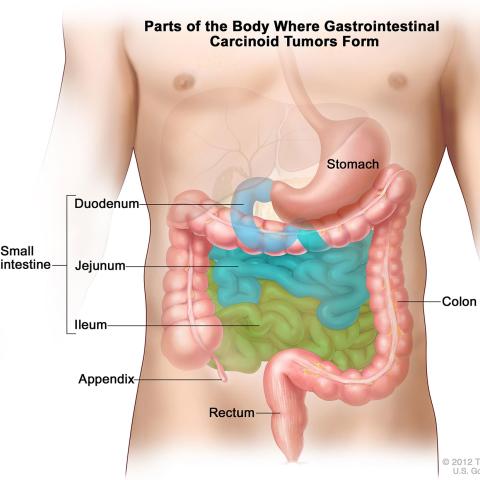 The middle portion of the gastrointestinal tract is a common location for cancerous neuroendocrine tumors to form.
Image credit: Terese Winslow

A phase I/II clinical trial at the NIH Clinical Center evaluates the effectiveness of a combination of two agents that may work in complementary ways to target inoperable or metastatic neuroendocrine tumors. One agent, lutathera, emits radiation inside the body, causing DNA damage, and the second agent, olaparib, a PARP inhibitor, blocks the repair of DNA breaks.

The first phase of the clinical trial will assess the safety profile of the combination as well as how patients tolerate it. The trial will also determine the maximum tolerated dose, which will be used in phase II, designed to measure the best overall response rate.

Neuroendocrine tumors occur in cells of the endocrine and nervous systems and are called carcinoid tumors when they occur in the intestines, although they can also be in other areas, such as the pancreas. Although neuroendocrine cancer is considered rare, its incidence has been increasing steadily over the past 30 years. According to NCI Surveillance, Epidemiology, and End Results (SEER) Program data, the annual incidence was estimated to be 7.8 per 100,000 persons in 2013, a five-fold increase since the 1970s. The proportion of individuals who have the disease is now estimated at 35 per 100,000 individuals, but it may be considerably higher if clinically “silent” tumors are included.

Similarly, overall survival has not changed significantly during this time period. According to NCI SEER data, overall survival for people with metastatic neuroendocrine cancer is two years, though other databases have survival rates ranging from three to more than five years.

Both lutathera and olaparib are FDA-approved as single agents, the former for neuroendocrine cancer and the latter for patients with the BRCA1 or BRCA2 mutation who have breast, ovarian or pancreatic cancer. This trial is among the first to evaluate the agents in a combination protocol.

Lutathera is unique in that it is a systemic targeted radiation treatment administered through infusion. “When most people think of radiation, they think of external radiation treatment, which is localized and focused on one area. However, radionucleotide therapy is systemic and can treat metastatic disease,” says Frank I. Lin, M.D., Lasker Clinical Research Scholar in CCR’s Molecular Imaging Branch, and the lead investigator for the trial. “Once injected, the lutathera circulates throughout the body and targets the radiation specifically to these neuroendocrine tumor cells, including tumors that might not even be visible on CT scans and other imaging. This focused radiation kills tumor cells by damaging their DNA, and the PARP inhibitor olaparib is expected to further the effectiveness by preventing the tumor cells from repairing their DNA.”

The potential downside is that as lutathera circulates throughout the body, it can have a negative impact on healthy organs, especially the kidneys and liver, as well as bone marrow. When used as a single agent, this effect is transient, but whether this will be true of the combination therapy is not yet known. “That’s why we’re starting at a low dose of the olaparib and progressing slowly,” says Dr. Lin. “We’re looking closely at the safety profile.”