Experiments That We Can Perform Using Tumor Cell Lines 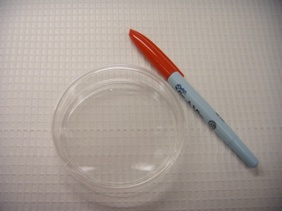 Pictured on the right is a plate that contains a tumor cell line (Picture 1). The pen is there to help provide a sense of the size of the plate. It looks like there is nothing on the plate. Even if you look really closely it is unlikely that you will see anything because the cells are very small. Before you continue reading, maybe you would like to guess how many cells are on that plate.

The size of an average tumor cell is approximately 10-20 microns. How small is that? Shown below are images of a single skin cell viewed under a microscope (Picture 2), a basketball (Picture 3) and the earth (Picture 4). If you took a single cell and magnified it to the same size as a basketball, it would be the equivalent of magnifying the basketball to the size of the earth. Hopefully that gives some idea of how small 10 microns is.

Another way to get a better idea of the small size of cells is to look at a ruler (Picture 5). Turn the ruler around so that instead of inches, you have the metric version, the lines that read CM and MM. CM is centimeters (about 2.5 centimeters make up 1 inch). MM is millimeters, and 10 millimeters (the small marks) make up one centimeter (the large marks). On your ruler, start at the first big line and draw as many dots as you can until you reach the first small line. This distance is one millimeter. 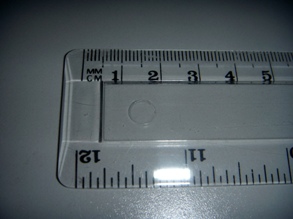 Maybe you were able to fit in 6 dots, for those with very steady hands or a fine tip pencil, maybe 11 dots? But you would have had to fit in 100 dots, for each of the dots to be 10 microns (1000 microns is equal to 1 millimeter). This is impossible, and not visible to the human eye.

Another way to appreciate the small size of single cells is to answer the question posed previously, how many cells are on that plate? The answer is one million cells. So, when we are working with cells, we need to use techniques to make the invisible, visible. One way is to use a microscope.

Shown below are photographs of a rhabdomyosarcoma (muscle tumor) cell line taken with a microscope at 100 times magnification. On the left are cells that have not been treated (Picture 6) and on the right are cells that have been treated (Picture 7) with an experimental agent for 48 hours. Cells that are alive remain attached to the bottom of the plate and can be visualized. However, cells that are dead cannot attach to the bottom of the plate and float off. Therefore, they cannot be visualized since the microscope is focused on the bottom of the plate. Of note, at the start of the experiment, there was no difference in the number of the cells or the way they looked. By comparing the two images 48 hours later, you can see that there are very few cells left from those treated with the experimental agent, compared to those that were not treated. In addition, if you look closely, you can see that many of the treated cells that remain are rounded and do not look like the untreated cells at all.

Microscopy is very effective in visualizing the changes to specific cells. But even at the lowest magnification, you can only see about 1,000 cells in any given image. So we would have to look at 1,000 different fields of view to visualize all of the cells that are present on one plate.

Shown below is another way to get an idea of the growth rate of the cells. The cells in the plate were coated with a blue dye that stains all cells (Picture 8). Again the untreated tumor cells are on the left and the cells treated with the experimental agent are on the right. The plate on the left is much bluer since there are more cells on the plate. This is another method that shows the same result we saw using the microscope. Namely, that treatment with the experimental agent results in a halt to continued growth.

Shown below is a graph that depicts the results of a similar experiment in a different way (Picture 9). Here, the x-axis (the part of the graph that goes from left to right) represents time, starting at 0 hours and ending at 80 hours. The y-axis (the part of the graph that goes from bottom to top) represents the color of the cells, starting at 0 and ending at 1. The control cells are shown by the blue line and the cells treated with the experimental agent are shown by the red line. At different time points (0, 6, 24, 30, 48 and 72 hours), the cells were given a colorless dye. If a cell is alive, it processes the dye and the dye becomes purple. Cells that are dead, or are about to die, cannot process the dye, and the dye remains colorless. Therefore, the more cells that are alive, the more the plate becomes purple, which we measure using an instrument that only allows the color purple to pass through a lens. Since the amount of purple increases over time in the control (blue) cells, we conclude that they are growing well over the span of three days. In contrast, the cells treated with the experimental agent (red) show little increase in the amount of purple over the same time frame, suggesting that their growth has been adversely impacted.

Based on these initial results, this experimental agent has been identified as a promising candidate to treat muscle tumors. The next stage of testing is to inject a rhabdomyosarcoma cell line into mice, followed by treatment of the mice with the experimental agent, to determine if the agent prevents tumor formation in mice.

What Can I do to Help?

We simplified these experiments as much as possible, but the fact is that scientific experiments are very difficult to perform and interpret. Many of the experiments are performed by talented researchers, who never have the opportunity to interact with patients, although their research many times impacts patient care. If you read a research article that you find interesting or useful, write a letter or send an e-mail message to the young researchers who performed the experiments. Let them know that you appreciate all of the work that they do. The first author on a paper is the person who performed the majority of the work and the last author is the head of the laboratory. Many of the younger researchers are listed in the middle. Contact e-mail addresses are published in the paper.