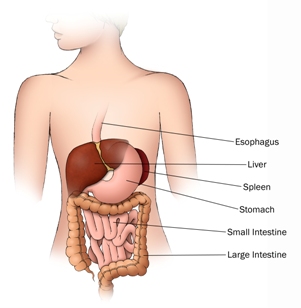 The gastrointestinal system is part of the digestive system, which is responsible for breaking down food and providing nutrition to the body (Picture 1). It starts with the mouth, where foods gets bitten and chomped into small bits. It then travels down the esophagus into the stomach. There, it meets a very harsh, acidic environment that breaks down the small bits of food even further into microscopic particles, resulting in the core nutrients of food: fat, protein and sugar. The highly digested particles are then propelled into the small intestine, where they are now in a form small enough that they can be transported through the walls of the intestines and into the blood stream. This allows the nutrients to get distributed to the parts of the body that require them the most. Back in the small intestine, what remains then gets propelled further into the large intestine, also known as the colon, where water get absorbed. Whatever is left over gets propelled into the rectum, where the remains are stored, until expelled. It is remarkable to think that something as solid as an apple can be minced down into such small particles that it can enter the blood stream and supply nutrition to the body as needed.

The official definition of stroma is “A supportive framework of an organ usually composed of connective tissue.” This definition is probably not that clear, so we will provide a comparison of the stroma to something that everyone is familiar with, a house. There are rooms in your house that are designed for certain functions, like the kitchen and the living room. Both of these rooms serve very different purposes and they require different elements to make them functional. Now imagine the rooms without any walls and you would see all of the important items that make the rooms functional, including electrical wiring, water pipes, insulation and support beams.

To continue the analogy, we will concentrate on the kitchen. The kitchen is used to prepare food. In order to do this, there are certain appliances that are required, such as a refrigerator and a sink. But these items would not function without the elements that are behind the walls, such as electrical lines and water pipes. Just as importantly, without the framework of the house, the beams and the insulation, there would be no support structure for these important lines to get to the items that they serve. The supporting framework of the kitchen is composed of wood beams and insulation, through which run all the electrical lines and water pipes, that allow the kitchen to function. Similarly, the supporting framework (stroma) of the stomach is composed of connective tissue, through which run the nerves and blood vessels, that allow the stomach to function.

A tumor is any abnormal growth in the body.

Layers of the Stomach

There are six layers that make up the stomach (pictured below). The inner most layer is the mucosa. It is composed of three main types of cells. Chief cells and parietal cells release harsh acids into the stomach, breaking down the food into smaller particles. Epithelial cells make up the vast majority of the mucosa. Their purpose is to form an impenetrable barrier, so that the harsh acidic environment of the stomach cannot penetrate and harm the rest of the body. The epithelial cells in the mucosa can be thought of as the walls of the kitchen. Of note, most adult cancers result from malignant changes in epithelial cells and are termed carcinomas, such as stomach cancer (gastric carcinoma) and colon and rectal cancer (colorectal carcinoma). This is in marked contrast to GIST.

The second and fourth layers of the stomach are called the muscularis mucosa and the muscle layer. These layers are composed of muscles that help propel the food from the stomach into the small intestine.

The fifth and sixth layers are the subserosa and the serosa, both of which provide cover for the stomach.

The third layer is the submucosa. It is composed mostly of connective tissue and it is in this layer that the nerves and blood vessels are located. Also located here are the Interstitial Cells of Cajal. These are pacemaker cells of the gastrointestinal tract, forcing muscles to squeeze, thus propelling food particles along from the stomach into the small intestine and then into the large intestine. It is thought that unwanted changes in the Interstitial Cells of Cajal give rise to GIST. Unlike epithelial cells which are derived from a superficial layer, cells in the submucosa are derived from a middle layer called the mesenchyme, and therefore GIST tumors are referred to as sarcomas, and not carcinomas. Looking again at the layers of the stomach (pictured above), due to the central location of the submucosal layer, tumors can grow inward, penetrating the lining of the stomach and causing bleeding into the gastrointestinal tract. In addition, tumors can also grow outward. In these cases, there may be no symptoms early on, with the possible exception of pain. Although the vast majority of younger patients with GIST and all of the SDH-deficient GISTS have stomach tumors, some patients may have tumors that develop in the intestines or even the esophagus.

What is pediatric GIST/wildtype GIST?

Patients who were diagnosed with GIST at 18 years of age or less will have the diagnosis of pediatric GIST.

A patient diagnosed at age 19 must be thinking, but I have to be closer to a pediatric patient rather than an adult type patient. Probably so, but we would have encountered a similar problem for any age. If we had chosen 23, a 24-year old would have asked the same question. For now, we ask that young adult patients, who do not meet the criteria of pediatric GIST, do not concern themselves with the exact definition.

We believe that there is a distinction between pediatric GIST and adult GIST. There seem to be differences in both the clinical course and the biology between younger and older patients. The purpose of the Pediatric and wildtype GIST clinic at the NIH is to better define these differences. We are examining a more rigorous definition of pediatric GIST in two ways.

First, by accepting all young patients with GIST into the clinic, we will be able to determine the clinical course of patients of all ages, over an extended period of time. This will put us in a position to assess if there is an age determinant to clinical course.

Second, as we acquire more biological samples from patients, researchers will be able to determine the differences in the makeup of tumor samples at the DNA/RNA/protein levels. Patients with similar RNA makeup can then be grouped together and the ages of the patients in these distinct groups can be examined. This will allow us to determine if there is a cutoff age other than 18 that better distinguishes pediatric, wildtype and adult GIST.

These are two ways by which we can assess if clinical and biological studies confirm our age distinction between pediatric and adult GIST. 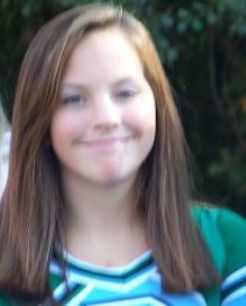 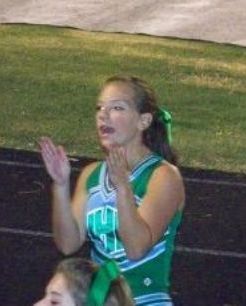 Kara Gay, who participated in the inaugural Pediatric GIST Clinic, is currently pursuing professional training in the healthcare field.