We study how cell signaling pathways produce different physiological outcomes in diverse biological contexts, such as during embryonic development and in adult tissue homeostasis. We focus on WNT signaling, a fundamental pathway that orchestrates patterning and morphogenesis during development, and promotes tissue renewal and regeneration in adults. We use powerful genetic screens in human cells to discover new regulatory mechanisms, and probe their molecular underpinning through biochemistry and cell biology to understand how they enable the pathway to generate distinct physiological outcomes. Based on this understanding we hope to devise more selective therapeutic strategies to target tumors driven by dysregulation of WNT signaling.

We are fascinated by the language that cells use to communicate with one another.  During embryonic development, secreted cues are received by cells and decoded through cascades of biochemical reactions called cell signaling pathways to faithfully execute many cellular programs, including self-renewal, differentiation, migration and apoptosis.  Similar cell-to-cell communication mechanisms are used by stem cells to maintain and regenerate most tissues of adult organisms.  Remarkably, only a dozen or so signaling pathways orchestrate the thousands of instructions required to transform a fertilized egg into a human being, and this number has not changed significantly during the evolution of simple multicellular organisms into complex animals.  Instead, signaling pathways have evolved additional regulatory mechanisms superimposed on conserved ‘core modules’ that endow them with new biological functions.

The long-term goal of our research is to understand how signaling pathways are used, reused and repurposed to drive the myriad different cellular processes that give rise to tissues and organs during embryonic development, and maintain them in adult life.  We seek to discover new regulatory mechanisms and understand in molecular terms how they modify signaling outcomes.  Since these same signaling pathways can cause devastating diseases when they become dysregulated, understanding their functional diversification will also open new and more selective therapeutic avenues.

We have begun to address these questions by studying WNT signaling, a fundamental pathway that encodes positional information in animals, orchestrates patterning and morphogenesis during embryonic development, and promotes tissue renewal and regeneration in adults.  Dysregulation of WNT signaling has been implicated in many diseases, including developmental malformations, skeletal and dental abnormalities, cardiovascular and neurodegenerative disorders, diabetes, and many types of cancer.  Despite intensive research efforts, there are still no FDA-approved drugs to treat WNT-driven tumors.

Our research strategy begins with the identification of new WNT pathway components through powerful genetic screens in cultured haploid human cells (Lebensohn et al., eLife 2016).  We use a combination of CRISPR-based genetic analysis, cell biology and biochemistry to dissect new signaling mechanisms (Lebensohn et al., eLife 2016; Lebensohn & Rohatgi, eLife 2018).  We explore these mechanisms in cells, organoid cultures and animal models to elucidate how regulatory additions to the pathway give rise to distinct physiological outcomes, and how defects in these processes cause disease.  Based on this understanding, we hope to devise more selective strategies to target tumors driven by dysregulation of WNT signaling.

Through forward genetics screens in haploid human cells harboring a fluorescent reporter of WNT signaling, we discovered regulators of the intact pathway as well as those selectively required to sustain oncogenic signaling.  This study (Lebensohn et al., eLife 2016) comprised seven genome-wide screens systematically interrogating the pathway, including screens for positive, negative, and attenuating regulators of ligand-induced signaling, as well as suppressor screens following disruption of key regulators commonly mutated in WNT-driven tumors, such as the tumor suppressor APC.  A comparative analysis of the screens revealed new regulatory mechanisms for ligand reception, signal transduction and transcriptional activation.  The following research projects are aimed at elucidating some of these new regulatory mechanisms and evaluating their therapeutic potential.

1) The transcription factor TFAP4 is a new limiting component of the WNT signaling pathway.

Our genetic screens uncovered a basic helix-loop-helix leucine zipper transcription factor called TFAP4 as a potential regulator of WNT signaling.  We have shown that TFAP4 acts downstream of b-catenin, the principal transcriptional co-activator in the WNT pathway, and is a limiting component of the pathway.  Furthermore, excess TFAP4 can promote ectopic activation of WNT signaling during Xenopus laevis development, causing the formation of a secondary body axis.  Interestingly, TFAP4 expression is tightly linked to malignancy in gastrointestinal cancers: TFAP4 is upregulated in colorectal cancer, where it mediates epithelial-mesenchymal transition (EMT) and metastasis, and its down-regulation in gastric cancer cells inhibits proliferation, induces cell cycle arrest and promotes apoptosis.  We will dissect the molecular mechanism by which TFAP4 regulates WNT signaling, and evaluate its potential as a therapeutic target.

A deep-rooted assumption in WNT signaling is that transcriptional responses are inextricably linked to the control of b-catenin protein abundance, the principal regulated step in the pathway.  The protein Axin2 is a central scaffold in the ‘destruction complex’ that targets b-catenin for proteasomal degradation.  Our genetic analysis revealed that a truncated form of Axin2 decouples b-catenin protein abundance from its transcriptional activity.  In engineered cells harboring this truncated allele of Axin2, b-catenin protein accumulates normally following stimulation with WNT, and yet its transcriptional activity is reduced by over 80%.  We will pursue a detailed mechanistic understanding of this phenomenon, and evaluate its potential as a therapeutic strategy to reduce oncogenic signaling in tumors in which b-catenin accumulates aberrantly due to mutations that render it incapable of being degraded.

Some WNT responses during embryonic development and in stem cell compartments depend on a second signal provided by the R-spondin family of secreted growth factors, only present in vertebrates.  R-spondins are key regulators of WNT signaling strength, but the mechanisms by which they transduce signals are not fully understood and how the four different members of the family control distinct physiological functions is unknown.  We discovered that R-spondins 2 and 3 can uniquely potentiate WNT signaling in cells lacking their only known cell-surface receptors, LGRs 4-6, through an alternative interaction with heparan sulfate proteoglycans (HSPGs) (Lebensohn & Rohatgi, eLife 2018).  This finding is transformative because LGRs were thought to be required to transduce all R-spondin signals and hence determine their site of action, but now we know that R-spondins can also signal in tissues where LGRs are not expressed.  The following research projects are aimed at elucidating the molecular mechanisms and physiological functions of ‘LGR-independent’ signaling by R-spondins.

A central question regarding any signal transduction mechanism is how binding of the ligand to the receptor communicates the signal across the plasma membrane and into the cell.  In the prevailing model, simultaneous binding of R-spondins to their LGR receptors and to the transmembrane E3 ubiquitin ligases ZNRF3 or RNF43 triggers their internalization.  This prevents ZNRF3 and RNF43 from targeting WNT receptors for ubiquitin-mediated degradation, thus increasing their abundance on the cell surface and enhancing sensitivity to WNT ligands.  We will investigate how R-spondins 2 and 3 transduce signals in the absence of LGRs through their alternative HSPG receptors to potentiate WNT signaling.

4) Physiological roles for LGR-dependent and LGR-independent signaling by R-spondins during embryonic development and in stem cells.

Gene amplifications followed by neo- or sub-functionalization of different gene family members underlie much of the functional diversification generated during evolution.  Yet, paralogues are often deemed to be redundant, and drastically different phenotypes resulting from their loss are simply attributed to tissue-specific patterns of expression.  This is the prevailing view regarding the four members of the R-spondin family, which potentiate WNT signaling during embryonic development and in adult tissue stem cells.  However, the markedly distinct phenotypes caused by the loss of different R-spondins or their LGR receptors could also be due to intrinsic differences in the capacity of these R-spondins to signal through LGR-dependent and LGR-independent mechanisms.  We will determine in what contexts these two modes of signaling are used during development, tissue homeostasis and regeneration.  We will also investigate what unique properties make the two different modes of signaling specifically suited to their physiological functions.

Andres Lebensohn grew up in Buenos Aires, Argentina.  He obtained his B.A. in molecular and cell biology from the University of California at Berkeley, where he conducted undergraduate research in enzymology with Dr. Daniel E. Koshland, Jr.  He obtained his Ph.D. in cell and developmental biology from Harvard University, where he studied the regulation of actin assembly by N-WASP and WAVE protein complexes using biochemical approaches in the laboratory of Dr. Marc W. Kirschner.  He then pursued postdoctoral studies as a Helen Hay Whitney Foundation fellow in the laboratory of Dr. Rajat Rohatgi in close collaboration with Dr. Jan Carette, both at Stanford University.  There he studied the WNT signaling pathway using genetic, cell biological and biochemical approaches.

October 1, 2018 - Andres joined the Laboratory of Cellular and Molecular Biology.  He is very excited to begin studies on new regulatory mechanisms of WNT signaling!

December 8, 2018 - Andres presented one of the two talks selected as top abstracts at the ASCB Doorstep Meeting "Beyond Homeostasis - Stem Cells Under Stress" in San Diego, CA: “Mechanisms and physiological implications of LGR-dependent and LGR-independent potentiation of WNT signaling by R-spondins” 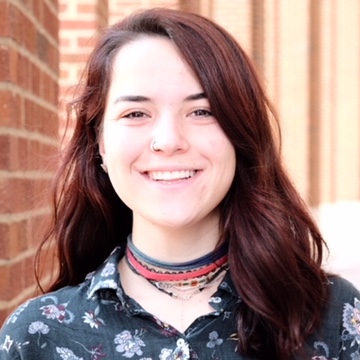 July 31, 2019 - Andres was a judge in the "Genes in Space" contest, which invites students in grades 7 through 12 to design biology experiments that address real-world challenges in space exploration. The five finalists presented their proposals at the International Space Station (ISS) Research and Development Conference in Atlanta, GA, and the winning team's experiment will be performed by astronauts aboard the ISS U.S. National Laboratory in 2020. 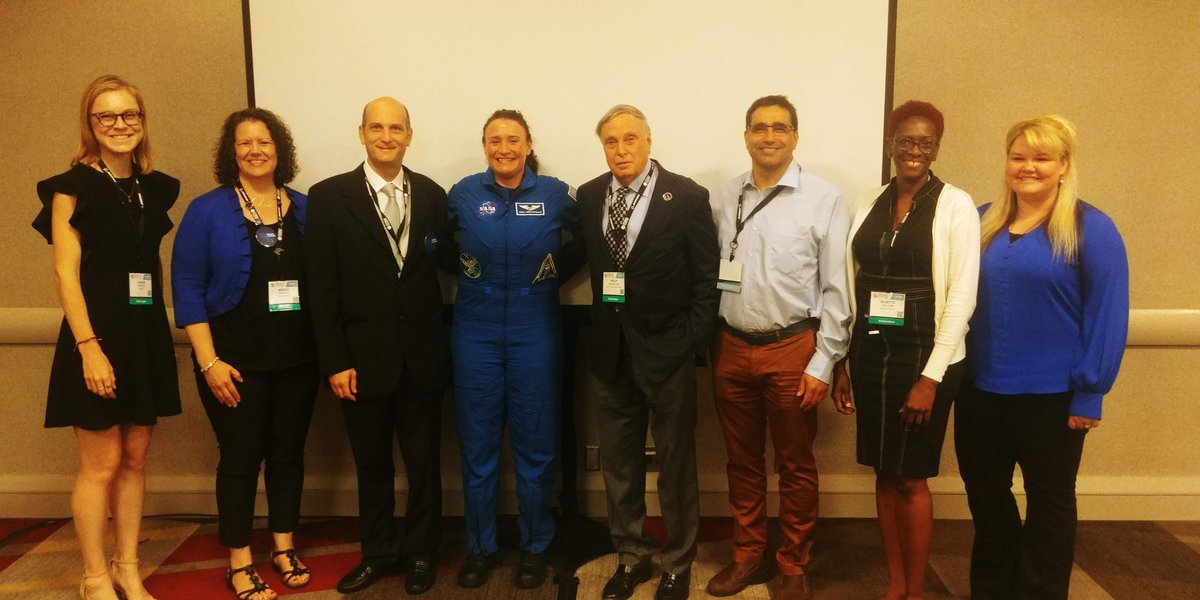 The judges with Astronaut Serena Auñón-Chancellor 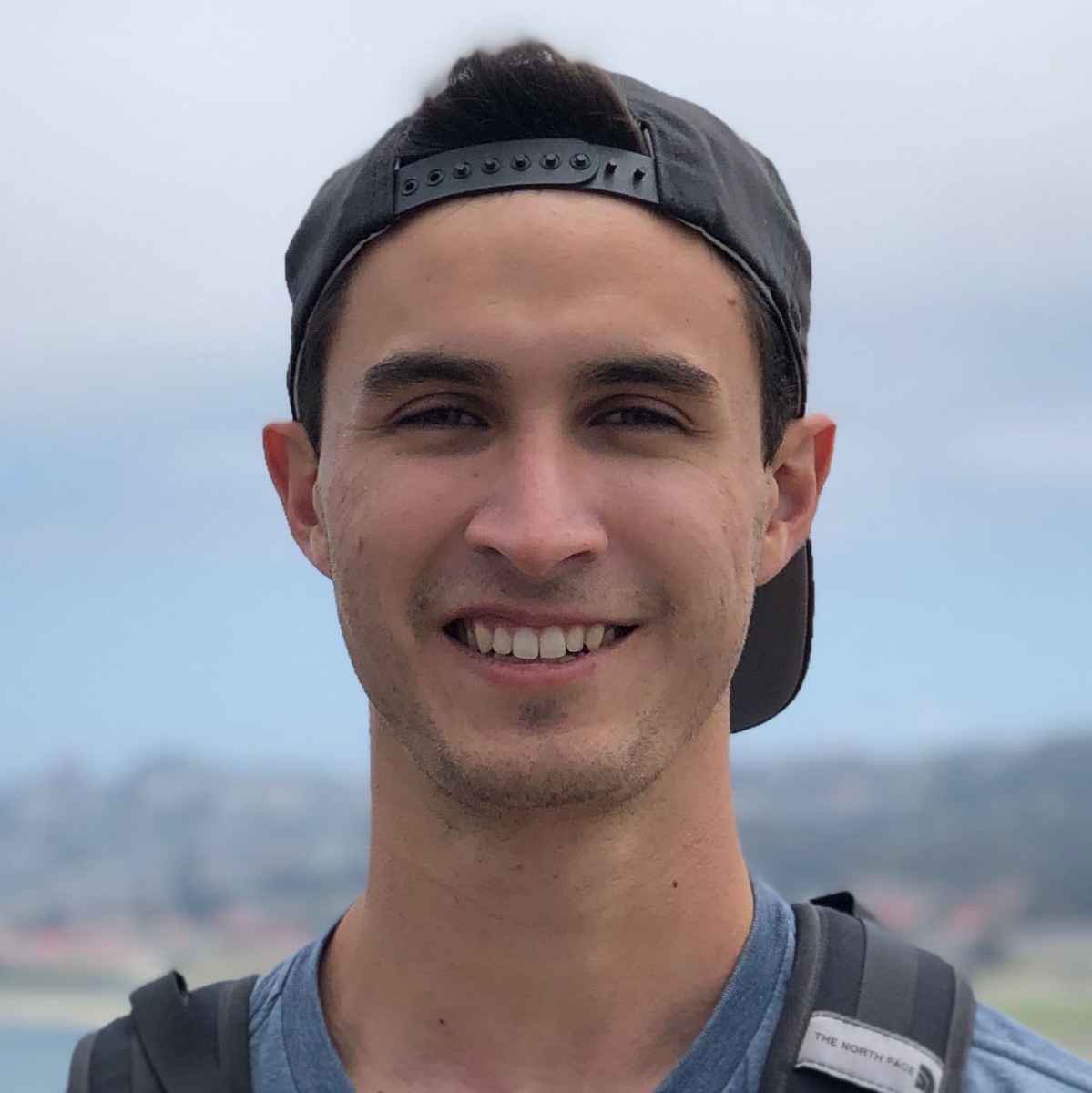 November 18, 2019 - We are recruiting post-bacs through the Postbaccalaureate Intramural/Cancer Research Training Awards (Postbac IRTA/CRTA) program. Plese click on the following link for a full description: 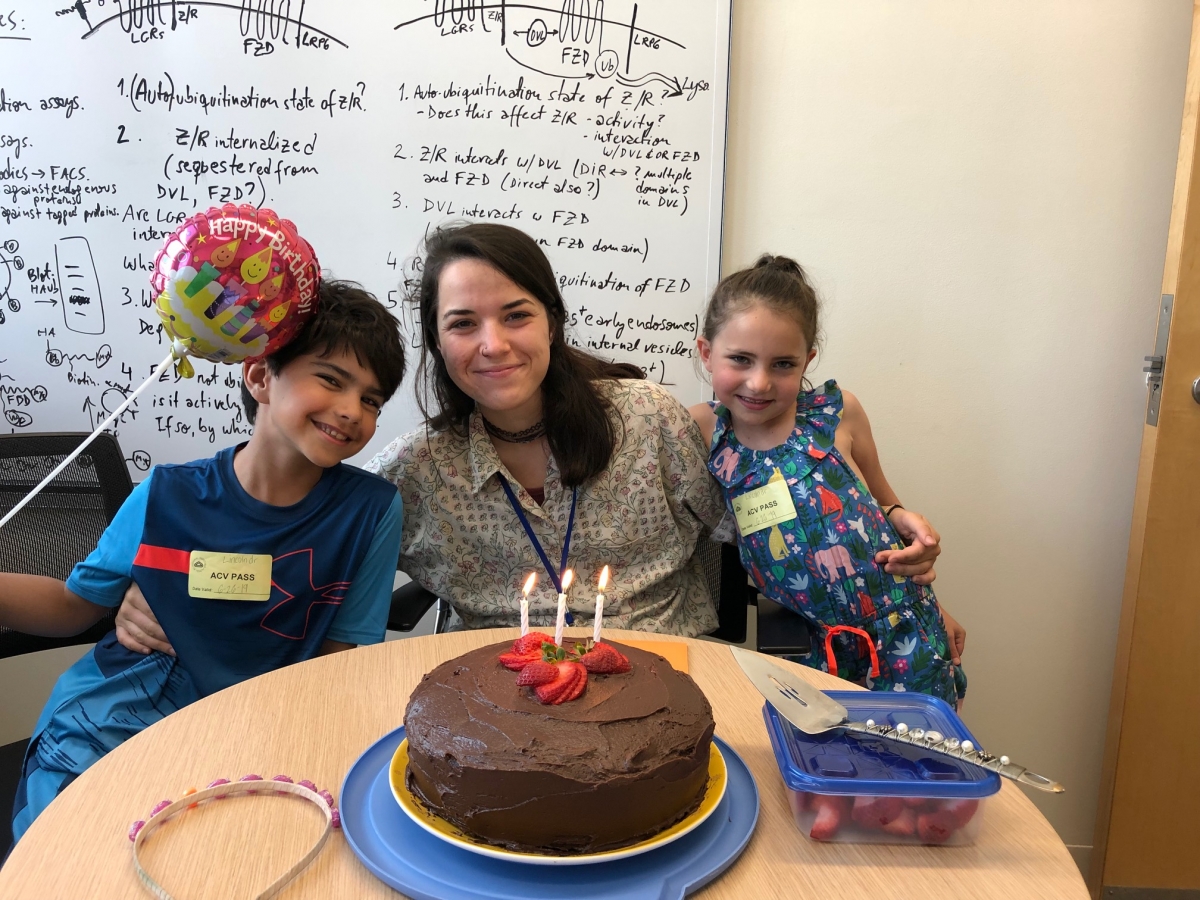 Courtney's birthday celebration with Gabi and Ani, and vegan cake baked by Alex! (6/26/2019) 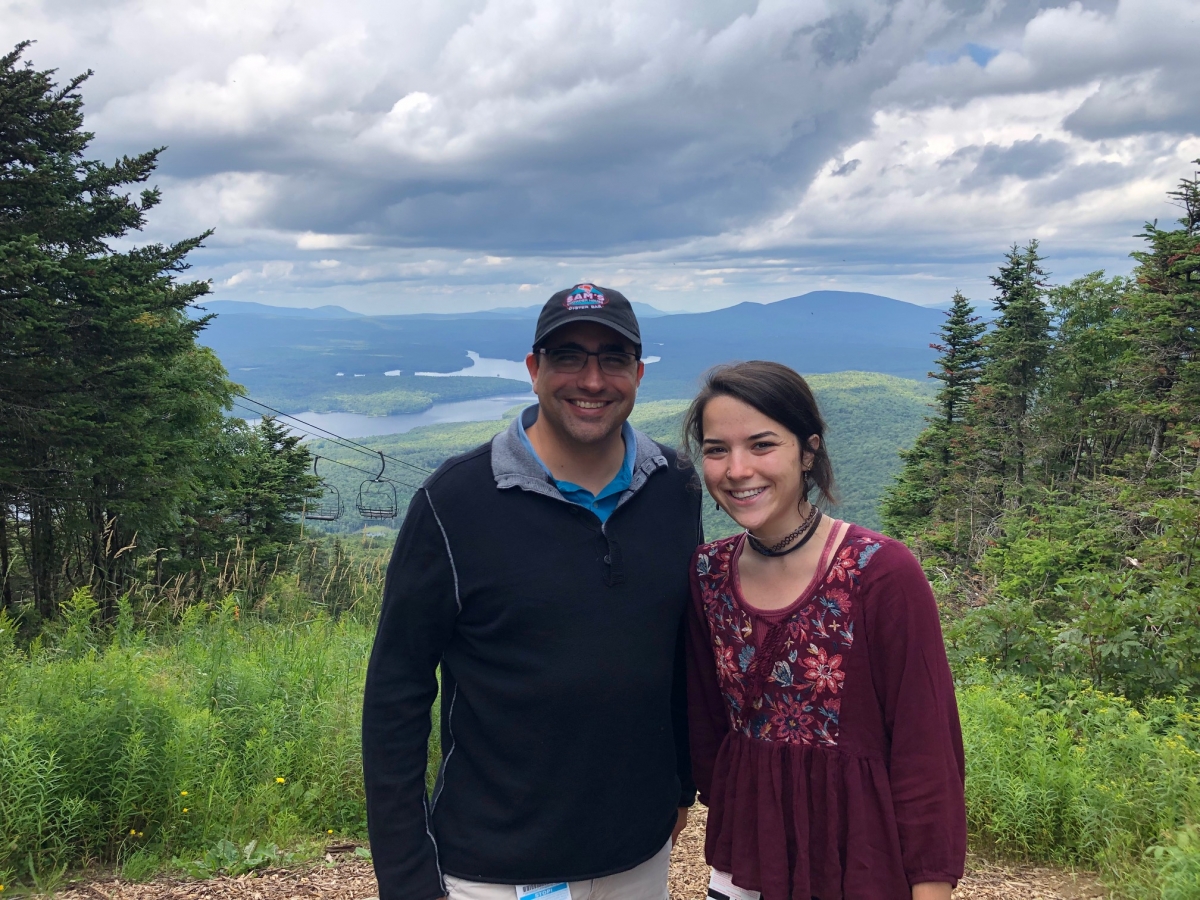 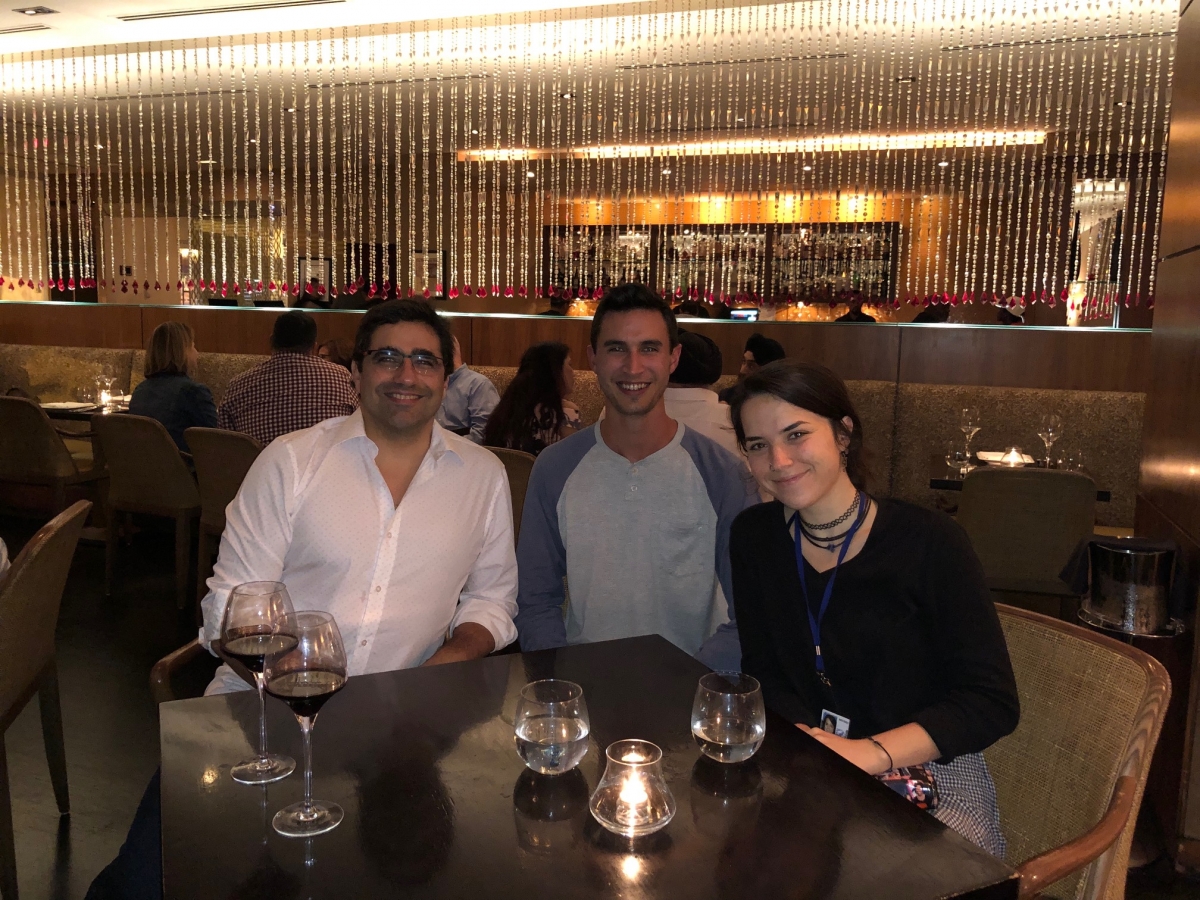 Andres, Joey and Courtney celebrating the one-year anniversary of the Lebensohn Lab at Rasika in Washington, D.C. (10/3/2019)