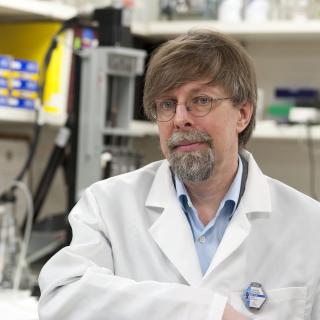 Dr. Kashlev investigates the mechanisms regulating transcription elongation by Escherichia coli (E. coli) RNA polymerase and the yeast RNA polymerase II (Pol II). He is strongly convinced that the single cell organisms (E. coli and the budding yeast) will continue to be most instrumental in understanding the basic principles of induced and spontaneous mutagenesis of DNA, which lead to tumorogenesis. Dr. Kashlev and his team investigate the following subjects: (1) mechanism of transcription-coupled DNA damage repair, (2) mechanisms employed by Pol II for transcription across bulky DNA lesions such as pyrimidine dimers and cyclopurines, and (3) mechanisms regulating transcriptional fidelity.

In the cell, information encoded in the DNA is faithfully transferred to protein by mRNA intermediate generated by RNA polymerases. Due to the transient nature of RNA, the biological importance of transcription fidelity has been notoriously difficult to investigate. The error-prone transcription has been proposed to contribute to cancer, aging and adaptive mutagenesis. Genetic selections and screens performed with libraries of randomly mutagenized subunits of RNA polymerase II (Pol II) from Saccharomyces cerevisiae (S. cerevisiae) and Escherichia coli (E. coli) RNA polymerase revealed mutations that increase the frequency of NTP mis-incorporation and insertions/deletions (slippage) in mRNA. Biochemical analysis of these mutants confirmed the low fidelity phenotype of the mutant polymerases. Insertion and deletion mutations generated by transcription slippage also have impact on biology because they result in translational frame-shifts and lead to synthesis of truncated proteins potentially toxic to the cell. In addition, transcription errors introduce a major disturbance to the active site of RNA polymerase leading to a prolonged pausing/arrest of the enzyme on DNA to interfere with gene expression and DNA replication. Increased misincorporation was not originally expected to have a profound biological effect. However, the biology-driven approach revealed mutations that render yeast dependent on error-correction protein factor TFIIS, make the cells sensitive to NTP depletion by 6-azauracil and increase misincorporation by Pol II in vitro. Taken together, these observations justified using the error-prone Pol II and E. coli RNA polymerase as a tool to develop screening approaches for mutants with increased errors. My laboratory performs biochemical characterization of the polymerase mutants that are error-prone in vivo to confirm increased misincorporation and slippage. We identify protein domains in RNA polymerase subunits responsible for control of transcription fidelity. In collaboration with Jeff Strathern, Donald Court, and Ding Jin’s groups in the Gene Regulation and Chromosome Biology Laboratory, we develop highly sensitive fidelity Cre/lox reporter systems capable of detecting infrequent transcription errors in E. coli and yeast. These reporters allow us to test the old-standing question of whether transcription errors fluctuate in a broad range depending on growth conditions and upon variable cellular stresses.

Cancerous and aging cells have long been thought to be impacted by transcription errors that cause genetic and epigenetic changes. Until now a lack of methodology for directly assessing such errors hindered evaluation of their impact to the cells. We have developed a high-resolution Illumina RNA-seq method that can assess non-coded base substitutions in mRNA at 10.000-100.000 per base frequencies in vitro and in vivo. Statistically reliable detection of changes in transcription fidelity assures that the RNA-seq can analyze transcription errors in a large number of genomic sites. A combination of the RNA-seq and biochemical analyses of the positions for the errors revealed two sequence-specific mechanisms that increase transcription fidelity by Escherichia coli RNA polymerase: (i) enhanced suppression of nucleotide misincorporation that improves selectivity for the cognate substrate, and (ii) increased backtracking of the RNA polymerase that decreases a chance of error propagation to the full-length transcript after misincorporation and provides an opportunity to proofread the error. The high-resolution RNA-seq is adoptable to a genome-wide assessment of transcription fidelity and post-transcriptional RNA editing far beyond E. coli cells. To complement the RNA-seq, we employ an improved method of the nascent elongating transcript sequencing (NET-seq) to study transcription errors in E. coli and yeast cells. On that avenue, we analyze biological impacts of transcription errors to genome stability in the single cell organisms (E. coli and yeast) followed by implementation of these findings and techniques to mammalian cells.

The faithful and efficient transcription of genomic DNA into mRNA is crucial for cell survival under DNA damage caused by UV irradiation, oxidative stress, or chemical DNA modifications. To maintain genomic integrity, cells have evolved separate cellular strategies involving multiple DNA damage repair and DNA damage tolerance mechanisms. Non-bulky DNA lesions are preferentially repaired by the base excision repair (BER) pathway. The damages that cause large DNA distortion, such as UV light-induced cyclobutane pyrimidine dimers/cisplatin adducts and oxidative cyclopurines are primarily subjected to the nucleotide excision repair (NER) pathway. Despite ongoing repair, some lesions escape detection, presenting the cell with a challenge for continued DNA and RNA synthesis. During replication, the deleterious effect of DNA lesions can be alleviated by translesion DNA synthesis (TLS). During TLS, the high-fidelity replicative DNA polymerases are switched transiently to specialized translesion DNA polymerases that can accommodate bulky lesions within a more spacious active site, thus enabling their bypass. Our work on transcription-coupled DNA repair (TCR) revealed that yeast Pol II has an intrinsic capability to bypass UV-induced pyrimidine dimers as an alternative pathway to its preferential repair by TC-NER. We defined this process as RNA polymerase translesion synthesis (RTLS) to distinguish it from the regular TLS by DNA polymerases. We further demonstrated that the efficiency of the pyrimidine dimers bypass by Pol II correlates with increased UV cell resistance. Most importantly, our most recent results revealed that mammalian Pol II employs the similar mechanism to negotiate with the pyrimidine dimers in vitro. To address the functional correlation between RTLS and TC-NER, we investigate the mechanism for strand specific repair in various genetic backgrounds in yeast as a model system. We expand our effort to transcription across the other types of DNA lesions including cyclopurine lesions (cyclo-dA and cyclo-dG) and 8-oxoguanine. We showed that yeast and mammalian Pol II are capable of transcription through cyclo-dA in vitro by using a mechanism, which is strikingly similar to transcription across the pyrimidine dimers.

As a separate effort, we continue elucidation of the role of Rpb4/7 and Rpb9 subunits of Pol II in initiation of TCR and will search for repair proteins specific to Rpb4/7- and Rpb9-dependent TCR pathways. In the long term, we aim to evaluate an impact of faithful and error-prone transcription to genome integrity during normal growth and endogenous/exogenous stresses caused by DNA damage, tumorigenesis and aging.

4. Mechanisms of transcription through nucleosomes by RNA polymerase II

This theme addresses the intriguing question of how eukaryotic RNA polymerases transcribe through chromatin. The project involves development of the minimal in vitro system for transcription through nucleosome by Pol II and Pol III from S. cerevisiae. RNA polymerase from E. coli, which behaves very similarly to the eukaryotic enzyme in nucleosomal transcription, is used in this project as an easy-handled prototype of Pol II. Is it related at all to cancer in humans? Yes, it is. A central characteristic of cancer is deregulation of transcription control leading to activation of expression of growth-promoting genes, as well as silencing of genes with the tumor suppressor functions. Importantly, mutations found in tumor cells cannot alone explain the complexity of the change in pattern of gene expression. Epigenetic changes in the transcribed regions, such as DNA methylation, covalent modifications of the histones, and ATP-dependent chromatin remodeling have been recently identified as key universal components of the transformation process. Therefore, epigenetic changes are considered promising targets for new anti-cancer drugs. However, development of the novel therapies is significantly hampered by the complexity of the interplay between the different pathways of epigenetic modifications. Rapid progress in this field depends on the understanding of the molecular mechanism of action of each of the epigenetic modifications, and establishment of hierarchy of the events ultimately leading to alterations of gene expression. To predict the effect of a certain epigenetic modification on the level of expression of a given gene, it is necessary to understand how the changes in chromatin, caused by remodeling and modification, affect transcription. Pol II transcribes templates packaged into the nucleosomes. Several lines of experimental evidence suggest that chromatin remodeling and modification occurs during promoter activation, and is associated with transcription elongation. It is not known if any chromatin remodeling and modification events are generally required for efficient elongation, and which play the gene-specific regulatory roles. To understand the molecular mechanism of transcription on chromatin templates by Pol II in vivo, we determine how the polymerase transcribes through a single nucleosome and short nucleosomal arrays in vitro. 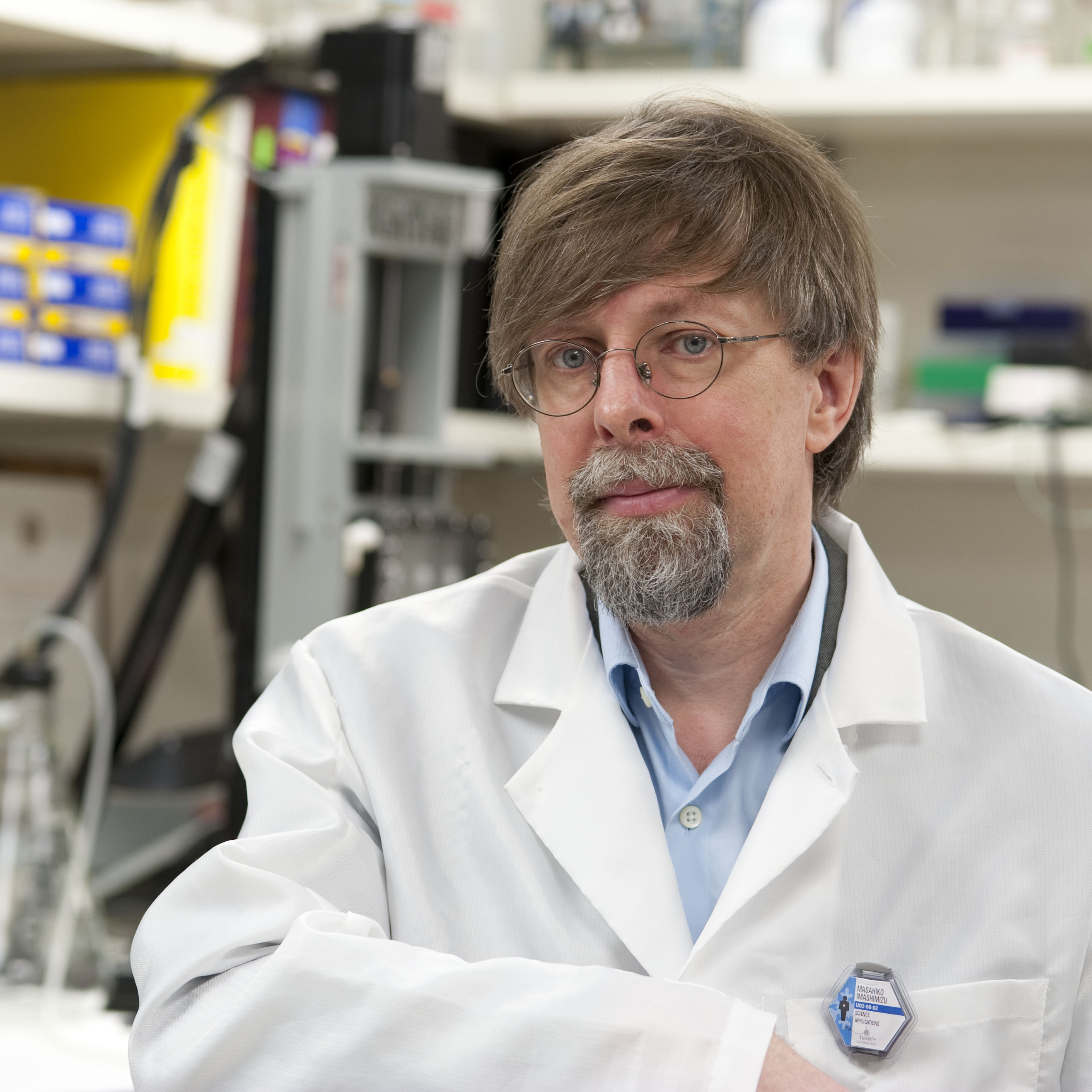 Dr. Kashlev received his Ph.D. in molecular biology from  Institute of Molecular Genetics, Moscow in 1990. He was a postdoctoral fellow in the Department of Microbiology at Columbia University from 1991 to 1992 and a research associate at the Public Health Research Institute from 1993 to 1996. In 1996, Dr. Kashlev joined the ABL-Basic Research Program and established the Molecular Mechanisms of Transcription Section. In 1999, he joined the Center for Cancer Research and was tenured in 2007. 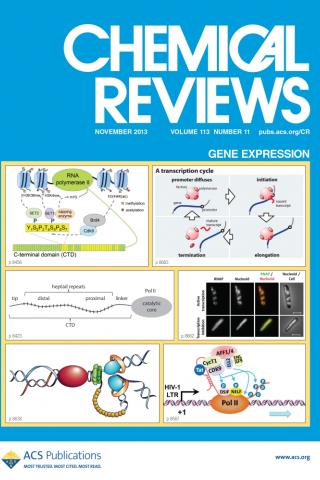 Multi-subunit RNA polymerases (RNAP) are ornate molecular machines that translocate on a DNA template as they generate a complementary RNA chain. RNAPs are highly conserved in evolution among eukarya, eubacteria, archaea, and some viruses. As such, multi-subunit RNAPs appear to be an irreplaceable advance in the evolution of complex life on earth. Because of their stepwise movement on DNA, RNAPs are considered to be molecular motors, and because RNAPs catalyze a templated polymerization reaction, they are central to biological information flow. The history of RNAP discovery and investigation of its mechanism and regulation appear as complex as RNAP itself. The central role of templated RNA synthesis in biological information flow was predicted by Jacob and Monod, and the enzymatic activity promoting formation of RNA polymers was reported in eubacteria and eukaryotes at that time by several groups. However, the DNA-dependent RNA polymerase proved elusive until 1960, when it was independently identified in bacteria by Hurwitz and Stevens and in plants by the Bonner group. 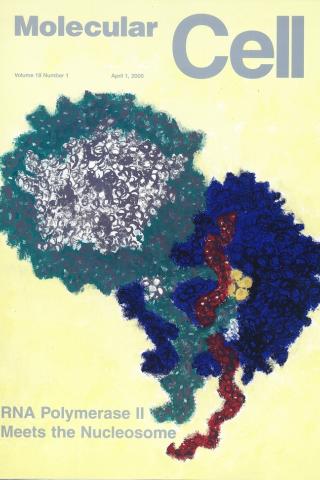 Nature of the Nucleosomal Barrier to RNA Polymerase II

In the cell, RNA polymerase II (pol II) efficiently transcribes DNA packaged into nucleosomes, but in vitro encounters with the nucleosomes induce catalytic inactivation (arrest) of the pol II core enzyme. To determine potential mechanisms making nucleosomes transparent to transcription in vivo, we analyzed the nature of the nucleosome-induced arrest. We found that the arrests have been detected mostly at positions of strong intrinsic pause sites of DNA. The transient pausing makes pol II vulnerable to arrest, which involves backtracking of the elongation complex for a considerable distance on DNA. The histone-DNA contacts reestablished in front of pol II stabilize backtracked conformation of the polymerase. In agreement with this mechanism, blocking of backtracking prevents nucleosome-induced arrest. Transcript cleavage factor TFIIS reactivates the backtracked complexes and promotes pol II transcription through the nucleosome. Our findings establish the crucial role of elongation factors that suppress pol II pausing and backtracking for transcription in the context of chromatin.