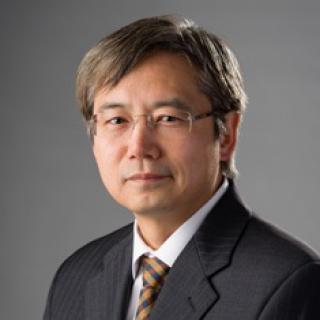 Dr. Matsuo has combined structural biology with molecular biology to study functional mechanisms of biomolecules. The biological systems that he chose to study were challenging and required the development of new techniques to answer the scientific questions that he was probing. For example, the structure of λ-phage Cro was among the first homo-dimers to be determined by NMR, the eIF4E-m7GDP complex structure was the first solved in a detergent micelle by solution NMR, and APOBEC3G was not amenable for structural study before his group overcame its insolubility. Dr. Matsuo plans to keep challenging the limits of structural biology to study biological systems that are important for human health.

Our research focuses on determining structures of biomolecular complexes containing protein, DNA and RNA by using nuclear magnetic spectroscopy (NMR) and X-ray crystallography. In addition, we develop new techniques in order to overcome current limitations in studying large and complicated biomolecular complexes. One of our research projects is to study a host-pathogen conflict between human APOBEC3G protein (A3G) and HIV-1. A3G is a single-stranded DNA cytosine deaminase that can restrict HIV-1 infection by mutating the HIV-1 genome. HIV-1 developed a counter defense mechanism by which virion infectivity factor (Vif) leads to the degradation of A3G through the ubiquitin-proteasome pathway. The ultimate goal of this project is to generate small compounds which inhibit the A3G ubiquitination by Vif. We hope to utilize our expertise in structural biology through collaborations at NCI.

Human APOBEC3G protein is a cytidine deaminase that generates cytidine to deoxy-uridine mutations in single-stranded DNA, and capable of restricting replication of HIV-1 by generating mutations in viral genome. The mechanism by which APOBEC3G specifically deaminates 5′-CCC motifs has remained elusive since structural studies have been hampered due to apparently weak ssDNA binding of the catalytic domain of APOBEC3G. We overcame the problem by generating a variant that has stronger catalytic activity with higher ssDNA affinity. We have determined the crystal structure of this variant complexed with a ssDNA substrate at 1.86 Å resolution. All nucleotides within the 5ʹ-TCCCA target sequence show numerous interactions with protein, explaining the nucleotide specificity preferences. Fundamental knowledge of this complex can guide the design of molecular-based therapeutics for AIDS by modulating A3G catalytic function.  Click here to see structures.

Bacteriophage DNA packaging motors translocate their genomic DNA into viral heads, compacting it to near-crystalline density. The Bacillus subtilis phage 29 has a unique ring of RNA (pRNA) that is an essential component of its motor, serving as a scaffold for the packaging ATPase. Previously, deletion of a three-base bulge (18-CCA-20) in the pRNA A-helix was shown to abolish packaging activity. We solved the structure of this crucial bulge by nuclear magnetic resonance (NMR) using a 27mer RNA fragment containing the bulge (27b). The bulge actually involves five nucleotides (17-UCCA-20 and A100), as U17 and A100 are not base paired as predicted. Mutational analysis showed these newly identified bulge residues are important for DNA packaging. The bulge introduces a 33-35° bend in the helical axis, and inter-helical motion around this bend is restricted. A model of the functional 120b pRNA was generated using a 27b NMR structure and the crystal structure of the 66b prohead-binding domain. Fitting this model into a cryo-EM map generated a pentameric pRNA structure; five helices projecting from the pRNA ring resemble an RNA claw. Biochemical analysis suggested that this shape is important for coordinated motor action required for DNA translocation.  Click here to see structures.

Structure of the Vif-binding domain of the antiviral enzyme APOBEC3G 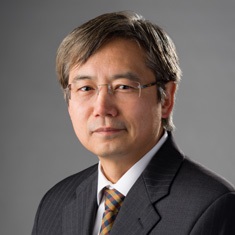 Dr. Hiroshi Matsuo received his Ph.D. from the Department of Chemistry, School of Science, Osaka University, Japan, in 1994. He determined the structure and DNA-binding mechanism of a transcription repressor protein from λ-phage, namely Cro repressor, using nuclear magnetic resonance (NMR) spectroscopy. After receiving his Ph. D., he headed to Boston, where he was a postdoctoral fellow in Dr. Gerhard Wagner’s laboratory at Harvard Medical School. There he solved the structure of eukaryotic translation initiation factor 4E (eIF4E) from yeast submerged in a detergent micelle by using NMR. To do so, he developed methodology to optimize NMR experiments for high molecular weight biomolecules. Dr. Matsuo joined the faculty in the Department of Biochemistry, Molecular Biology & Biophysics (BMBB) at the University of Minnesota in 2010, where he ultimately obtained tenure. There, his laboratory studied the structure and function of bacteriophage phi29 pRNA, an essential component of a DNA packaging motor, and HIV-1 restriction factor APOBEC3G. He taught Introduction to Biophysical Chemistry to undergraduates, and served as a Director of the BMBB graduate program for four years. Dr. Matsuo joined the Basic Research Laboratory of CCR in 2015. He has been an ad hoc study section member of the NIH AIDS Discovery and Development of Therapeutics (ADDT), NIH Special Emphasis Panel named ZRG1 AARR-J, and NIH Special Emphasis Panel named ZRG1 AARR-E (2008, 2012) as well as an ad hoc reviewer for domestic and international funding agencies. Dr. Matsuo was recently awarded a cCRADA grant to study structures of APOBEC3 proteins and their complexes with binding partners including HIV-1 Vif protein and human E3 ligase proteins.