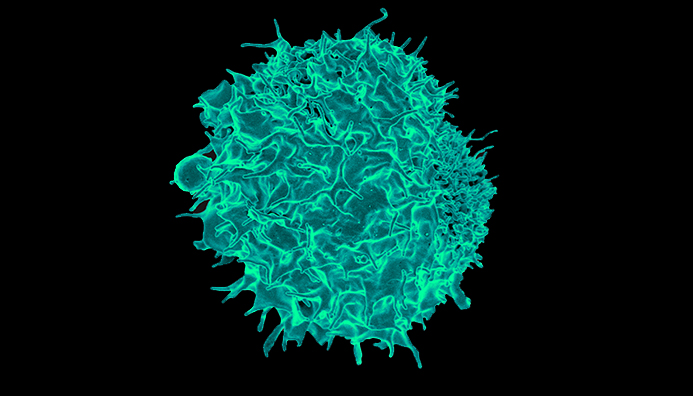 Researchers in the Center for Cancer Research (CCR) have discovered a mechanism that helps drive the renewal of a key type of immune cell that targets tumors and may play an important role in immunotherapy. The results, published February 18, 2019, in Nature Immunology, demonstrate how the transcription factor c-Myb facilitates self-renewal of CD8+T cells.

CD8+T cells play an important role in recognizing the unique proteins found on cancer cells, ultimately helping to trigger an immune response that can kill them. Once a CD8+T cell is exposed to a type of cancer, it retains a memory of that cancer. As CD8+T cells self-renew and produce new generations, this memory is passed on to daughter cells. Researchers have been eager to pinpoint ways in which to boost this regeneration of experienced T cells.

“From our previous work and emerging findings from clinical studies, it’s clear that T cells with an enhanced capacity for self-renewal are an ideal cell population to achieve long-term and perhaps curative antitumor responses,” explains Luca Gattinoni, M.D., Investigator in CCR’s Experimental Transplantation and Immunology Branch. “Developing new strategies to induce and maintain T cell self-renewal is a promising avenue to enhance the efficacy of T cell-based immunotherapy.”

To reproduce new generations, CD8+T cells must acquire stem cell-like properties to do the job. This process is guided by specific transcription factors, molecules that govern cellular fate and phenotype. The transcription factor c-Myb is known to regulate the fate of stem cells in a number of adult tissues, which prompted Dr. Gattinoni and his colleagues to explore its effects on T-cell differentiation.

The researchers studied mice that were genetically modified so that the expression of c-Myb could be deleted by exposure to a drug. They found that when c-Myb was deleted in CD8+T cells, this impaired the cells’ generation of stem cell-like memory cells. What’s more, the few stem cell-like memory T cells that were generated in the absence of c-Myb had reduced function. These data suggest that c-Myb plays an important role in the regeneration of T cells.

Next, the researchers took a set of T cells that recognize melanoma and induced overexpression of c-Myb. When they transferred the cells into mice with melanoma, all of the mice were cured of their tumors. Remarkably, these mice benefited from long-term immunity, so that 200 days after receiving the modified immune cells, new tumors transplanted into the mice did not grow.

“From a translational point of view, it brings a feeling of accomplishment having developed a therapeutic strategy that allowed for the eradication of large, established melanoma tumors and the establishment of a long-lasting protective immunologic memory to [the] tumor[s],” says Sanjivan Gautam, Ph.D., first author of the study.

A critical next step, he says, is to develop new cancer immunotherapy strategies harnessing this discovery.