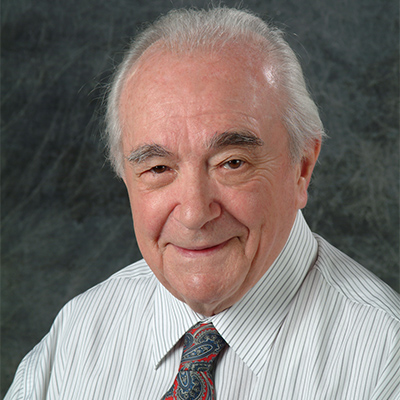 CCR mourns the recent death of Stephen Oroszlan, Ph.D. Steve was a pioneer in studies related to the biochemistry and enzymology of retroviral replication and the biosynthesis of retroviral enzymes and structural proteins. Since his retirement from the ABL-Basic Research Program at the NCI-Frederick, he served as Scientist Emeritus with the HIV Dynamics and Replication Program (HIV DRP) in the Center for Cancer Research.

Steve received his early training in engineering in his native Hungary. Following his immigration to the U.S., he obtained a Ph.D. in Pharmacology from Georgetown University. After his postdoctoral training at the NCI from 1961 to 1963, he conducted biochemistry research on retroviruses at the Albert Einstein Medical Center, George Washington University School of Medicine and Flow Laboratories. In 1976 Steve returned to the NCI to serve as director of the Molecular Virology and Carcinogenesis Laboratory, ABL-Basic Research Program, from 1983 to 1995. He was appointed Scientist Emeritus in 1995, and since 1999 he had been affiliated with the HIV DRP.

Steve was perhaps best known for his groundbreaking research defining the role of retroviral proteases in the generation of mature Gag-related protein products, which comprise the virus particle structure. This work played a central role in the development of HIV protease inhibitors, which became a mainstay in the treatment of HIV-infected individuals. His laboratory also discovered that many retroviral Gag proteins are modified with the fatty acid myristate, a finding that was of great importance in understanding the assembly of retroviral particles. Steve published more than 250 papers and was named one of the most highly cited researchers in microbiology by the Institute for Scientific Information.

His numerous honors include the award of a Doctor Honoris Causa Degree from the University of Debrecen Medical School in 1993, election to the Hungarian Academy of Sciences as a foreign associate in 1994, a Retroviral Retrospective Symposium held in his honor at Hood College in 1994 and the Mór Kaposi Research Foundation Award in 2000.