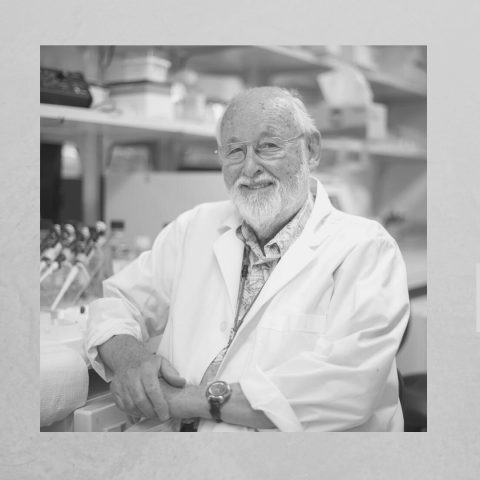 The CCR community is profoundly saddened by the recent passing of Joost “Joe” Oppenheim, M.D., Senior Investigator and Head of the Cellular Immunology Section in the Cancer Innovation Laboratory. He died on May 14, 2022, at the age of 87.

Joost was engaged in cellular immunology research at the NIH for five decades and was instrumental in the discovery of cytokines, chemokines, and alarmins, which are substances produced by immune cells that enable them to communicate and act as “first responders” to injury or infection.

A pioneer in the field of immune cell regulation and response, Joost was one of the first to recognize the importance of intercellular cytokine signals in the regulation of immune defenses against infections and tumors. His early research focused on interleukin 1 (IL-1), and he proved the compound’s capacity to protect animals from death caused by radiation and chemotherapeutic agents. His findings led to clinical evaluation of IL-1 for human cancer treatments.

Joost’s research group generated landmark discoveries and the birth of the chemokine field. They purified, characterized and patented IL-8 and monocyte chemotactic protein-1 (MCP-1) and demonstrated that chemokines play key roles in AIDS, inflammation, immune responses and development. The lab’s numerous discoveries prompted some to nickname him the “Father of Cytokines,” and his later work focused on utilizing alarmins as vaccine ingredients for use against infectious agents and tumors.

Joost was born in 1934 in the town of Venlo, Netherlands, near the German border. He and his brother survived the Holocaust as Jewish children hidden by a Catholic Dutch family, the Heuvelmans. Joost's family moved to the United States soon after World War II. A talented student, he attended the Bronx High School of Science and then Columbia University. He obtained his M.D. degree from the Columbia College of Physicians and Surgeons, New York, in 1960, and then interned at King County Hospital in Seattle.

He joined the NIH’s postgraduate program in 1962 and trained as a clinical associate at the NCI. Following that, he was an honorary research fellow in immunology at the University of Birmingham, England. In 1966, he returned to the NIH and started his lab at the National Institute of Dental Research. He served as the Medical Director of the United States Public Health Service from 1975 to 1983, then moved to the NCI in 1983 and served as the Chief of the Laboratory of Immunoregulation until 2015.

Over the course of his career, Joost accumulated numerous accolades, including the Technology Transfer Award from NCI (2001–2005), the NCI Outstanding Mentor Award (2004), the International Cytokine Society Honorary Lifetime Award (2004), the Metaphor Scientist Award from Regensburg, Germany (2006), the Trisociety Award from ICS, IFN and JLB Society (2009), the Harold Stewart Award from the Jackson Foundation of USUHS (2010) and a Certificate of Appreciation from the China Academy of Chinese Medical Sciences Cancer Institute (2013). He was editor-in-chief of the Journal of Leukocyte Biology, served on the editorial board of several prominent international scientific journals and was a member of numerous societies, including the American Academy of Microbiology, American Association of Immunologists, American Society for Clinical Investigations, International Cytokine Society, Society of Leukocyte Biology, and the Association of American Physicians. Most recently, in 2022, he was elected as a distinguished fellow of the American Association of Immunologists.

Joost was a titan in his research and academic accomplishments, and he was an inspiration both to his mentees and colleagues. “His publications do not convey that a secret of his success as a researcher often seemed to flow as much from intuition as from serendipity,” said his longtime colleague and friend Scott K. Durum, Ph.D. “Nor do they convey the self-deprecatory wit that sparkled through his lectures from the most prestigious podiums.”