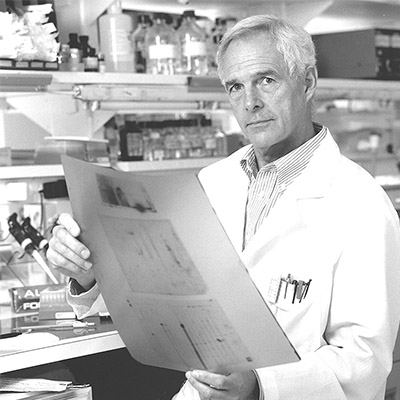 The Center for Cancer Research mourns the recent death of colleague and friend Gilbert Howlett Smith, Ph.D. He was a valued and much liked member of the NCI community since 1965.

Gil received a B.A. in biology from Hartwick College in 1959 and went on to earn an M.Sc. and Ph.D. in biology from Brown University in 1963 and 1965, respectively. He joined NCI as a staff fellow in the Viral Biology Branch in 1965 and became senior investigator in the Laboratory of Biology in 1970. He most recently served as senior investigator in the Basic Research Laboratory and head of the Mammary Stem Cell Biology Section. He retired June 30, 2020, and was recently named an NIH Scientist Emeritus.

Gil was an expert in the biology of mammary/breast cancer and the stem cells involved in mammary development and cancer. Gil always had a knack for ‘firsts.” His work included the first description of the nuclear pore complex by electron microscopy (EM) and the first description of MMTV virus capsid in situ by EM. The discovery that changed his career path and influenced generations in the field, however, was his first description of a mammary stem cell in breast tissue based on morphology. He then went on to report the first description of the mammary niche and of lineage-limited progenitors in mammary epithelium, the demonstration of asymmetric division and distribution of template and newly synthesized DNA by multipotent mammary epithelial cells in vivo, and the discovery of evidence that signals from the non-tumor mammary microenvironment can suppress tumorigenesis. His proposal of tissue-specific stem cells was far ahead of his time and is now a foundation in the field of developmental biology. His steadfast conviction early on has greatly contributed to our better understanding of the mammary gland and breast cancer, and his research also provided the tools and model systems to further advance the field.

Not only did Gil make seminal contributions in his field, but he was known as an outstanding mentor. He mentored hundreds of junior scientists around the world and received the NCI Mentor of Merit Award in 2003 and the NCI Outstanding Mentor Award in 2019. His many mentees now carry his torch, or as one of them said “his stemness.”

Gil presented numerous invited lectures, authored 180 research publications and served on several editorial boards and the Childhood Brain Tumor Foundation board. He made invaluable conceptual contributions, was a thought leader, always ahead of his time and was considered a “scientist’s scientist.” He will be greatly missed by NCI and the entire cancer research community.

Dan Gallahan, Ph.D., Director of the NCI's Division of Cancer Biology, shared some thoughts on his mentor and friend:

"Anyone who had the privilege of knowing Gil will surely remember his passion for biology and the strength of his conviction. I came to know Gil as a graduate student in the Laboratory of Tumor Immunology and Biology in the late eighties. While Gil was an investigator in that lab, he was never really a member of any lab, as much as a cancer researcher focused almost exclusively on understanding the biology of the mammary gland in hope to better understand breast cancer. The power and logic of this approach was made clear to me when I discovered, along with Bob Callahan, a developmental gene rearrangement that led to mammary tumors in mice. While this was an exciting molecular discovery it didn’t tell us anything about the mechanism or the biology. Through Gil’s experience in mammary gland biology and extensive use of mouse model systems we were able to understand the biological impact of this gene and understand how its aberrant expression could lead to mammary cancer. Gil’s early work was studying a unique virus that caused mammary tumors in mice, but he quickly realized that the insight was in the biology of the mammary gland itself. This led to many seminal findings including the elusive search for the mammary gland stem cell and a practical understanding of the unique ontogeny of the mammary gland.

"This steadfast conviction has greatly contributed to our better understanding of not only the mammary gland and breast cancer, but his research also provided the tools and models systems to further advance the field.  Lastly, I want to recognize Gil as a great mentor and teacher. His passion for the field really shined here. On the subjects of cellular histology or when demonstrating the transplantation on a mouse, he took time to make sure you not only understood but were able to integrated this knowledge into your research. I had many great interactions with Gil whether in the lab or traveling to meetings, and while he could intimidate you with his strong convictions and deep baritone voice, I always felt he wanted to make you a better researcher. And I think he did. The NCI and the cancer community has lost another great one."