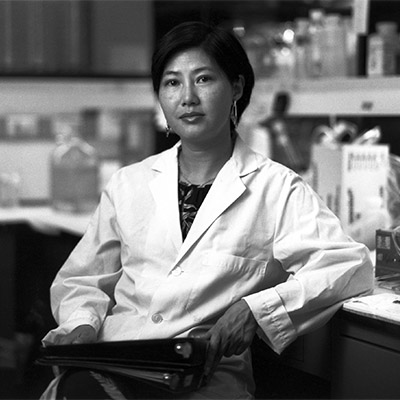 Flossie Wong-Staal, Ph.D., a pioneering former NIH scientist, a major figure in the discovery of HIV and the first to clone that virus, died on July 8, 2020, from a pneumonia infection. She was 73 years old.

Flossie arrived at the NIH as a visiting fellow in 1973 and began working in the NCI lab of Robert Gallo, who was on the cusp of a remarkable string of discoveries. Flossie, with her Ph.D. from UCLA in molecular biology, became the ideal complement to Gallo's medical-based scientific intuition, and the two would go on to co-author more than 100 journal articles over the next 20 years.

Among her first big successes in the Gallo lab, Flossie provided the definitive molecular evidence that human T-lymphotropic virus (HTLV) can cause cancer. The research sealed the case that human retroviruses can be carcinogenic, a stance long dismissed by the research community. Flossie would soon rise to the rank of senior scientist and, in 1982, became section chief of the NCI Laboratory of Tumor Cell Biology. When HIV, a newly discovered retrovirus, emerged in the early 1980s, she was poised to make significant discoveries with Bob and a host of others in NCI and NIAID. Flossie was the first to clone HIV and determine the function of its genes, a major step in proving that HIV is the cause of AIDS.

Flossie also discovered molecular evidence of micro-variation in HIV, which led to the use of "drug cocktails" to manage AIDS. She provided the molecular biology necessary for the second-generation blood test for HIV. She was the most-cited female scientist of the 1980s, with near 7,800 citations, according to an October 1990 article in The Scientist.

Concerning her earliest days at the NIH, Bob Gallo said: "She came as a postdoc, and she was the best I ever saw — before, during, or after. She was really sharp in things I needed to be sharper in. We talked every day." Bob added that, as a result of Flossie in his lab during the 1970s, "we became among the most productive labs in the 20th century." Genoveffa Franchini, a senior investigator in the NCI Vaccine Branch, was a postdoc in Flossie's lab in those heady days of the 1980s. She noted that Flossie's command of molecular biology was a key reason why Bob and others at the NIH could move so quickly on HIV research.

Flossie was lured away from the NIH in 1990 by the University of California San Diego where she would start the Center for AIDS Research. Her research thereafter focused on therapeutic approaches to thwarting HIV, primarily by gene therapy and ribozymes. She had an entrepreneurial spirit, and while at UCSD, she co-founded a biopharmaceutical company called Immusol. She retired from UCSD in 2002 and became Chief Scientific Officer for Immusol, which she renamed to iTherX Pharmaceuticals with her husband, Jeffrey McKelvy, a few years later when their research interest turned to finding better drugs for hepatitis C.

Flossie was born Yee Ching Wong in Guangzhou, China, in 1946. In 1952, her family joined the many who had fled to Hong Kong after the Chinese communist revolution. She attended a Catholic school there where American nuns teaching at the school asked her to choose an English name. As Flossie tells it, she wanted something distinctive, so she asked her father, and he suggested Flossie, the name of a massive typhoon that had recently hit the region.

Flossie left Hong Kong at age 18 to attend the University of California Los Angeles. She graduated cum laude in just three years and then delved straight into a Ph.D. program in molecular biology and graduated in 1972.  After a brief postdoctoral fellowship at UCSD, she came to the NIH the next year with her new husband at the time, Steven Staal. She quickly shone in the lab and attracted the admiration of many. She was cheerful with a wonderful sense of humor and a flare for fashion; indeed, her style and grace lent themselves well to a second passion of hers, competitive ballroom dancing.

Flossie was an established leader in molecular biology in the 1980s, heading a productive lab and mentoring dozens of postdocs, like Genoveffa Franchini, who have become leaders themselves in labs around the world.  As relayed in her NIH oral history in 1997, she never felt open discrimination as a female scientist at the NIH, but by 1990 she felt the urge to step away on her own to initiate and lead a major effort at UCSD.

Flossie accumulated numerous accolades, including membership in the National Academy of Medicine (1994) and in the Academia Sinica in Taiwan (1994); honored as one of the top 50 female scientists by Discover Magazine (2002) and #32 of the "Top 100 Living Geniuses" in a Daily Telegraph listing (2007); and induction into the National Women's Hall of Fame (2019).

In addition to her husband, Flossie is survived by her two daughters (Stephanie and Caroline), one sister and two brothers, and four grandchildren.

The family is in the process of planning a memorial. In lieu of flowers, the family asks that those interested donate in Flossie's name to Doctors Without Borders.