Genomic profiles of lung cancer differ based on ancestry 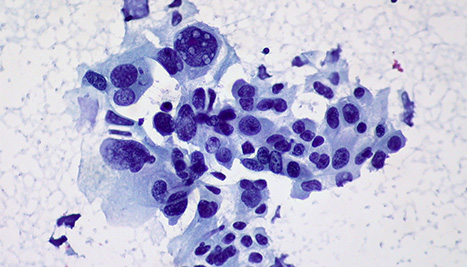 An analysis of tumors from people with non-small cell lung cancer by researchers at the Center for Cancer Research revealed differences in genomic instability and homologous recombination deficiency in tumors from people with African ancestry compared to those with European ancestry. Genomic instability is usually related to a high frequency of mutations, gene copy number changes and other alterations within the genome. These findings highlight ancestry-related differences in tumor biology and may help improve our understanding of the higher incidence of cancer burden and high mortality observed in African Americans.

The study, reported January 13, 2020, in the inaugural issue of Nature Cancer, and led by Bríd Ryan, Ph.D., M.P.H., Investigator in the Laboratory of Human Carcinogenesis, in collaboration with Eytan Ruppin, M.D., Ph.D., Chief of the Cancer Data Science Laboratory, notes that although the cause of genomic instability is not entirely clear, increased genomic instability may be the result of increased HRD in tumors from African American patients.

Homologous recombination is an important mechanism for repairing DNA damage in which both strands of DNA are broken. Deficiencies in this process will lead to errors during DNA repair and an increased potential for genomic instability that could drive the development of cancer. Notably, this study reported that African American patients diagnosed with lung cancer have lost this repair mechanism in their normal (germline) cells six times more than normal cells from European American patients.

Beyond improving our understanding of the molecular basis of cancer disparities in African Americans, the findings by Dr. Ryan and colleagues may have therapeutic implications as well. Tumors with higher HRD may respond particularly well to a class of molecules called PARP inhibitors, suggesting that they may be more effective in the patients with African American ancestry, a possibility Dr. Ryan’s lab will explore. "Noting the clinical potential, we are next testing the response to PARP inhibitors in lung cancer cell lines with a range of HRD derived from patients with different ancestry," said Sanju Sinha, one of the first authors of the study.

Previous genomic analyses aimed at understanding the molecular mechanisms underlying cancer have consisted mostly of samples derived from patients of European ancestry, lacking sufficient diversity to identify differences between racial or ethnic populations. The findings highlight the need and the potential benefit of including minority and underrepresented populations in this area of cancer research.