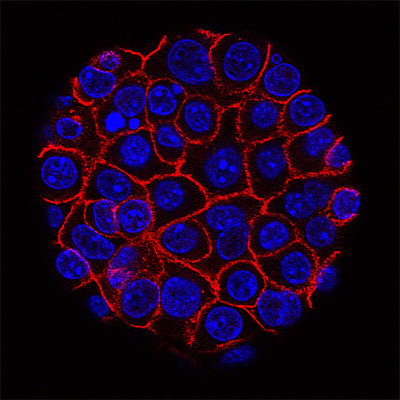 A clinical phase II trial at the NIH Clinical Center will test the effectiveness of a monoclonal antibody used immediately before and after surgery for patients with primary pancreatic and bile duct cancer and those who have liver metastasis from colorectal cancer. The trial is investigating whether this treatment can prevent the disease from coming back after surgery.

This new clinical trial at the NIH Clinical Center aims to address this problem head-on with a focus on high recurrence rates.

“We know that between 40 and 50 percent of patients with these aggressive tumors have recurrences, often within the first year,” said Jonathan Hernandez, M.D., Investigator in CCR’s Surgical Oncology Program, and the lead investigator for the trial. “We have a good idea why this is the case. From the time the tumor begins to grow in an organ, cells that are shed from the tumor can travel throughout the body. While most of these cells die or remain dormant, some begin to grow, resulting in a life-threatening recurrence of the cancer.”

Chemotherapy cannot be given for about two months following surgery, largely because the body needs that time to heal. But during that interval, cancer cells throughout the body have had an opportunity to grow. “The microtumors thrive in the inflammatory conditions created as a result of the surgery, which makes patients particularly vulnerable during this period,” added Hernandez.

The trial’s goal is to bridge this gap period by giving patients the monoclonal antibody MVT-5873, which targets an antigen called CA 19-9 produced by the tumor cells. This antibody isn’t targeting the tumor that’s going to be surgically removed. Instead, it’s going after micrometastases that cannot be seen yet. The antibody works by binding to individual tumor cells and causes them to die.

Patients will be given the antibody before surgery and then immediately following it, during the critical 2-month period when the body is healing. Researchers will be testing how safe the treatment is before and after surgery and determine the highest doses that can be tolerated. When patients are switched over to standard adjuvant chemotherapy, they will be taken off the trial protocol but will continue to be followed. The trial will include between 65 and 90 patients.

The trial builds on an earlier phase I trial sponsored by MabVax Therapeutics, which developed the antibody, and was led by Eileen O'Reilly, M.D., associate director of the David M. Rubenstein Center for Pancreatic Cancer Research at Memorial Sloan Kettering Cancer Center. The six patients in the study were given MVT-5873 along with standard-of-care chemotherapy. All the patients had measurable reductions in tumor volume and tolerated the treatment well.

As a result of these positive findings, the MabVax team is conducting a larger, multicenter trial. They are currently recruiting as many as 68 patients. The new trial will look at patients receiving the monoclonal antibody as well as those receiving chemotherapy.

The two trials should provide meaningful data about the effectiveness of this treatment. “Our hope is that we can cut down on early recurrences, which typically take place within the first year after surgery,” said Hernandez. “That gives us a readily measurable endpoint for the study. If we’re successful, down the road this treatment may become part of standard care.”

To learn more about this trial, visit our website.