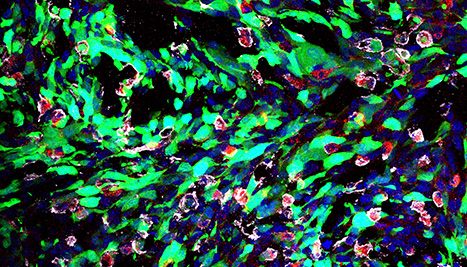 Nanoparticles in the brain
Photo courtesy of NCI Visuals Online

Patients with recurrent gliosarcoma and previously treated central nervous system (CNS) sarcomas may be eligible to participate in a new clinical trial at the NIH Clinical Center.

Mark Gilbert, M.D., of the Neuro-Oncology Branch, is leading a trial of the cancer drug sunitinib for recurrent gliosarcoma and previously treated sarcomas of the CNS, which comprises the brain and spinal cord. Sarcoma is a cancer that typically begins in connective tissues such as blood vessels, nerves, muscles and bones but only rarely develops in the brain or spinal cord. Most commonly, the most frequent malignant primary brain tumor, glioblastoma, changes to include areas of sarcoma, called gliosarcoma. Primary sarcoma of the CNS is rare. As they grow, sarcomas in the brain and spinal cord can interfere with neurologic function; the specific symptoms depend upon the location of the tumor. Sunitinib has been studied in several other types of cancer where it was able to inhibit factors that help tumors grow, build blood vessels and spread to other parts of the body. Investigators want to see if sunitinib can have the same antitumor effect on sarcomas and gliosarcoma of the brain and spinal cord.