Dr. Terabe is an extensively trained immunologist that seeks to understand the mechanisms of immune regulation in cancer patients. He hopes to elucidate the mechanisms that drive the immune system to fail to eliminate a tumor, and how we can use those findings to therapeutically drive the immune system to become act more effectively against the tumor (called immunotherapy). Current research ideas in his lab include a focus on natural killer T-cells (NKT cells), a lesser known population of the immune system which have the response rate of the innate immune system but the antigen specificity of the adaptive immune system. They are a unique component that can be recruited to tumors to attack and/or help other immune cells to destroy malignant cells, and Dr. Terabe hopes to translate his knowledge on NKT-cells to new cancer treatments that can help patients combat brain tumors more effectively.

Dr. Terabe has been a passionate immunology researcher for over 20 years, with a specialized expertise in studying T-lymphocytes. More specifically, upon joining the Neuro-Oncology Branch, he has been focused on determining the role of Natural Killer T-cells (NKT cells) in the context of brain tumors. While there are various types of T-lymphocytes, NKT cells stand out for a few reasons. First, NKT cells prefer lipids as their antigen of choice, certain types of which are enriched or highly expressed in the brain and mount a response as quickly as the innate immune system while retained the antigen specificity of T-cells in the adaptive immune system. Since tumor immunity driven by the many players of the immune system can regulate tumors in a positive (decreases growth) or negative (promotes growth) way, NKT cells with specific lipid targets in the brain could be the ideal mediator of immunotherapy that suppresses malignancy.

There are several upcoming projects in Dr. Terabe’s lab investigating the role of NKT cells specifically in glioblastoma, a field that has not been previously well investigated. Firstly, Dr. Terabe hopes to elucidate how tumor growth or development as well as immune cell recruitment to the tumor site may differ in the absence of NKT cells in a mouse model immune system. NKT cells have been known to specifically target lipids, which can undergo changes in expression upon tumor development and progression in various cancers. Another research endeavor in the lab will specifically study sulfadide, a lipid in myelin sheath that can be recognized by NKT cells and how they can be of assistance in recruiting NKT cells to the tumor even if the lipids undergo minor changes in the tumor microenvironment. Finally, since NKT cells have an innate response component and are often referred to as innate T-lymphocytes, Dr. Terabe’s team hopes to elucidate the mechanisms behind tumor immunity in glioblastoma with a specific focus on NKT cells. 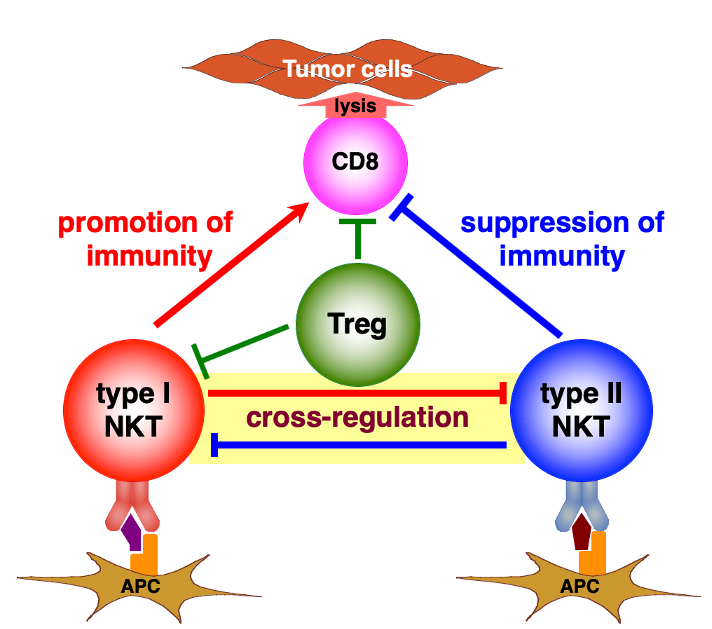 FIGURE LEGEND: There are two types of Natural Killer T-cells (NKT cells), which can both be activated by antigen presenting cells (APCs) presenting specific antigens, such as lipids and glycolipids. Type I NKT cells have an immune promoting effect resulting in tumor cell lysis when effective, whereas Type II NKT cells have an immunosuppressive effect allowing the tumor cells to survive. Since tumors have been known to exhibit changes in the structure and concentration of lipids produced, NKT cell function can be crucial for recognizing this change. Together with mediating T-regulatory (Treg) cell, which suppress an immune reaction similar to Type II NKT cells, understanding how NKT cells can promote tumor infiltration will be a significant stop in utilizing immunotherapy in brain tumors.

Dr. Terabe has been an integral part of NCI’s immunology research program and recently joined the Neuro-Oncology Branch to extend his expertise to brain tumor research. He received his Doctor of Philosophy (Ph.D.) degree from the University of Tokyo in 1999 studying immune responses against parasitic infections and subsequently arrived at NCI as a visiting fellow at the Molecular Immunogenetics and Vaccine Section of the Metabolism Branch, which is now a part of the Vaccine Branch. He later graduated to a Research Fellow (2002-2005), a Staff Scientist (2005-2007), Associate Scientist (2007-2017) and Senior Associate Scientist (2017-2019) in the same branch, now under Center for Cancer Research. Alongside his extensive expertise in immunology, he began collaborating with investigators on tumor immunology projects and gained insight into the significance of the immune system in developing tumors and treatment intervention. Dr. Terabe joined the Neuro-Oncology Branch as an investigator in early 2019 to follow his long-standing interest in brain tumors to pursue the role of immunology in glioblastoma.

In addition to his impressive research career in immunology, during which Dr. Terabe has published over 80 papers and received numerous awards. Notably, he has been awarded the NCI Director’s Innovation Award in 2006 and again in 2010, along with the NCI Technology Transfer Award 13 times over the last 18 years for his groundbreaking research. He currently has 16 patents either in process or already issued for his work as part of the NCI. Finally, Dr. Terabe also serves on the Board Member for The Open Cancer Immunology Journal while also being a reviews and editor for numerous other journals.