Glioblastoma is the most lethal primary central nervous system cancer. Part of the reason the tumor is so deadly is because it is hard to treat. The tumor itself is invasive and aggressive – it develops tentacles that invade other areas. This makes it hard to completely remove with surgery. Further, the cancerous cells can grow and spread quickly in the brain.

Chemotherapy, radiation, and surgery have been considered treatment staples for glioblastoma for decades. However, many chemotherapy drugs are not able to reach the brain. There are also no specific treatments that can kill all the cancerous cells.  Because of this, the tumor usually grows back within six to nine months of initial diagnosis and treatment. Notably, glioblastoma cells can also survive treatment by changing or adapting to their environment. Being able to predict how these changes occur is a crucial step to increasing patient survival.

In a new paper in Nature Communications, authors from NCI’s Neuro-Oncology Branch, Orieta Celiku, Ph.D., Mark Gilbert, M.D., and Orit Lavi, Ph.D. study how glioblastoma cells can evolve over time through exploratory adaptation. This concept explains how organisms, including cancer cells, adapt and survive in stressful or new conditions. Although it was first discovered in yeast and fruit flies, exploratory adaptation can also be applied to tumors. In fact, it is even more relevant in glioblastoma since the tumor cells can quickly learn to adapt and survive various treatments. 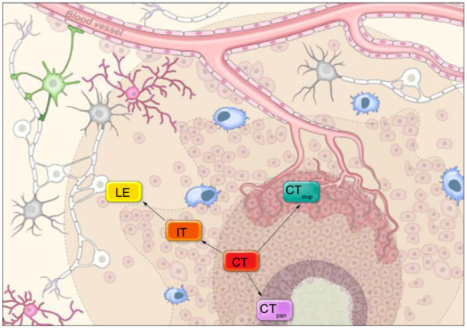 Progression of tumor cells from the tumor core (CT) to the leading edge of the tumor (LE) through an intermediate state (IT), towards a proliferating state (CTmvp) close to vasculature or a necrotic state (CTpan).

In the paper, the authors sought to determine how and when glioblastoma tumor cells use exploratory adaptation. Sometimes, glioblastoma cannot be entirely removed by surgery, leaving behind tumor cells that intersect with healthy tissue. These cells are usually at the tumor’s periphery so, “understanding the interactions of the various compartments and how it alters cancer biology is important”, said Dr. Gilbert.

Since obtaining samples from patient tumors over time would require repeated invasive biopsies, the authors created mathematical models to show how a tumor might change over time in different areas. These different regions obtained from a tumor database represents snapshots of cancer cells adapted to environmental changes.

Dr. Celiku states that they began the process with “patient-derived data from the IVY-Glioblastoma Atlas, which contains the [genetic] profiles of different regions of low- and high-grade glioma tumors. This included the tumor core, near the hypoxic (dead tissue) region, near newly formed blood vessels, on the infiltrating region near health tissue, or on the leading edge”.

They then simulated what adaptation from one area of the tumor to another could look like to figure out whether cells could adapt through many initial states to the same final genetic state. Over many simulation steps, they found that some tumor areas have cells that can survive much better and adapt quicker under stress. Moreover, as tumor cells transition away from their initial features at the tumor core, they can undergo an intermediate state. From here, they become more like the tumor’s edge and spread faster through the brain.

Using changes in gene expression, the authors also proposed the concept of phenotypic distance – the hypothetical distance from one genetic change to another. This can help capture how hard it might be to achieve such a change. Understanding the phenotypic distance and gene expression patterns that push cells toward adaptation can help paint a picture of the path tumor cells take to evolve. Since a tumor can also naturally evolve with no stress present, the baseline measurement was also simulated.

Further, the authors found that the evolution of tumor cells to new states can be reversible because they retain memory of their previous states. This change is often faster than exploratory adaptation and follows along the same path backwards to the cell’s original state. A deeper insight into the changes necessary for exploratory adaptation in glioblastoma may be helpful in developing future therapies to prevent the tumor from recurring.

Surgery is the first and best option to increase patient survival in glioblastoma. However, because glioblastoma cells grow into the surrounding brain, tumor cells left behind during surgery to save healthy tissue can grow into new tumors at the same site.

Therefore, this study is an important step to understand various parts of the tumor and how cells change or regrow after surgery. “The idea that you can take a large dataset and create predictive mathematical algorithms that explain tumor behavior is what is most awe-inspiring about the findings” says Dr. Gilbert. Dr. Celiku also adds that a “better understanding of such processes might lead to novel approaches to treating glioblastomas and their recurrence through disruption of the adaptation”. In other words, this information can be used to predict the cells left behind during surgery at the tumor’s edge transition into a new, more aggressive tumor. It is also clear through this study that cells can adapt slightly and “settle” in a semi-stable environment. This helps them survive short-term instead of spending more time adapting into a perfect state, and they can always adapt more later.

Exploratory adaptation and adaptation without stressful therapeutic conditions methods are both used by tumor cells to cause a recurrence. Therefore, predicting the tumor’s response to therapy to catch recurrence early is especially important. Notably, the authors mention that inhibiting cancerous cells before they transition to a new state can help avoid their development into a new tumor. It’s like hitting multiple birds with one stone.

In conclusion, this study highlights the powerful influence of exploratory adaptation in cancer. Being able to effectively understand this process for glioblastoma may help researchers and clinicians develop methods to intervene early and prolong patient survival, not only in brain tumors but possible in other tumors types as well.