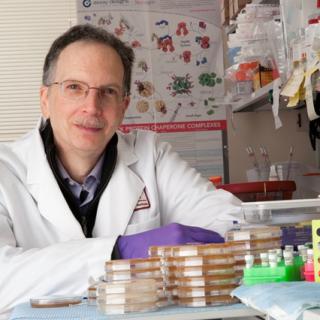 Dr. Neckers identified the molecular chaperone Hsp90 as a key non-oncogene addiction of cancer, demonstrated that Hsp90 is an anticancer target, and showed that this target is druggable. Dr. Neckers discovered the first inhibitor of Hsp90, geldanamycin, as well as the first-in-human Hsp90 inhibitor, 17-AAG. His basic and translational research efforts have facilitated the development of a new class of anticancer drugs. Recently, Dr. Neckers has uncovered a fundamental role for the mitochondrial Hsp90 homolog TRAP1 as a key regulator of the balance between oxidative phosphorylation and aerobic glycolysis in cancer cells, expanding our understanding of the Warburg effect in cancer.

The goal of this laboratory is to identify mechanism-based, molecularly targeted therapeutic approaches to modulate cancer cell growth and survival. An important facet of this goal is identification of novel intracellular targets for specific pharmacologic intervention. For the last several years, our research has been focused toward (1) understanding the biologic activity of chaperone proteins, particularly HSP90, in mediating signal transduction in cancer cells, and (2) promoting the translational development of HSP90 inhibitors as novel anti-cancer agents. Benzoquinone ansamycin antibiotics were isolated in the late 1970s and classified as tyrosine kinase inhibitors. However, we observed that these drugs did not function as classic tyrosine kinase inhibitors and we investigated their true mechanism of action.

Our discovery in 1993 that the HSP90 family of chaperone proteins was the predominant intracellular target of benzoquinone ansamycins led to a series of ongoing, interrelated studies in which we are (1) delineating the drug-protein interaction, (2) characterizing the sequelae of this interaction, and (3) identifying the components of the signal transduction machinery that are the secondary targets of this interaction. In addition, we are collaborating with the Developmental Therapeutics Program and CTEP, NCI, on clinical development of benzoquinone ansamycins, and we are currently participating in phase I and phase II testing of 2 HSP90 inhibitors in cancer patients. This research emphasizes the critical role of the HSP90 chaperone family in diverse signal transduction pathways and identifies the HSP90 family as novel targets for anticancer drug development. Although others have proposed, based on in vitro renaturation experiments, that HSP90 may act as a generally nonspecific chaperone, our findings support a different hypothesis; namely, that HSP90 function in vivo is highly specific and is regulated by interaction with unique accessory proteins.

In addition, we are the first to describe the importance of HSP90 in the function of mutated p53, Bcr-Abl, Raf, HIF-1alpha, and the receptor tyrosine kinase p185c-erbB2. In addition, we demonstrated the importance of the HSP90 homolog, GRP94, in the processing, trafficking, and stability of nascent erbB2 and other transmembrane tyrosine kinases. We have identified the ansamycin binding site on HSP90/GRP94 as a unique region in the amino terminal portion of the molecule. By studying many chemical derivatives of the basic benzoquinone ansamycin structure, we determined that biologic activity requires high affinity binding to HSP90/GRP94. We showed that this drug class disrupts HSP90/GRP94 interaction with several signal transduction proteins, resulting in destabilization and improper intracellular localization of the signal transducers. We have determined that, in addition to p185c-erbB2 and mutated p53, pp60v-src, c-raf-1, and HIF-1alpha proteins require HSP90 interaction for function. Protein destabilization triggered by benzoquinone ansamycins is mediated by ubiquitination followed by proteasome-dependent proteolysis. In the case of p53, drug treatment inactivates and destabilizes the mutated protein without affecting function of wild-type p53. Thus, cellular activity of multiple oncogene/proto-oncogene products depends on a common mechanism, making the HSP90 chaperone family an exciting new molecular target for anticancer drug development.

Our current studies include: (1) identification and characterization of other HSP90 client proteins; (2) identification and characterization of other small molecule antagonists of HSP90 that might be better suited for clinical use; and (3) investigation of the role of HSP90 in angiogenesis and metastasis. We are also participating in the design and implementation of several phase II clinical trials of HSP90 inhibitors alone or in combination with other agents for the experimental trreatment of mastocytosis, clear cell and papillary cell renal cancer, chronic myelogenous leukemia, and acute myelocytic leukemia. 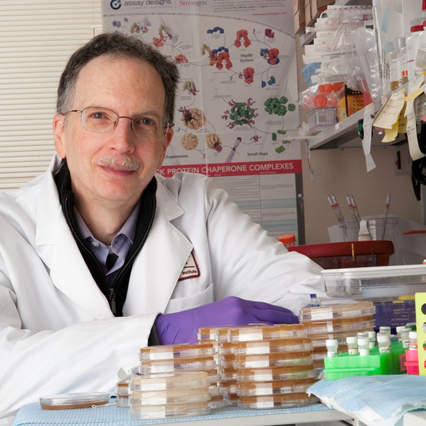 Dr. Neckers received his Ph.D. from the University of Connecticut, completed postdoctoral training at the NIH, and joined the NCI in 1981. He became Chief of the Tumor Cell Biology Section, Medicine Branch, in 1988. An early proponent of translational research, Dr. Neckers pioneered development of oligonucleotide-based therapeutic strategies. Recently, Dr. Neckers has been investigating the role of chaperone proteins in signal transduction. His identification of benzoquinone ansamycins as specific antagonists of the chaperone HSP90 uncovered the importance of this protein for the growth and survival of cancer cells and led directly to the first phase I clinical trial of an HSP90 antagonist as an anticancer agent. Dr. Neckers continues to examine the pivotal role of Hsp90 in cancer cell survival, and participates in the ongoing translational development of Hsp90 inhibitors as novel anti-cancer agents. Dr. Neckers holds several patents and has been the recipient of several NIH Merit and NIH Inventor's Awards.