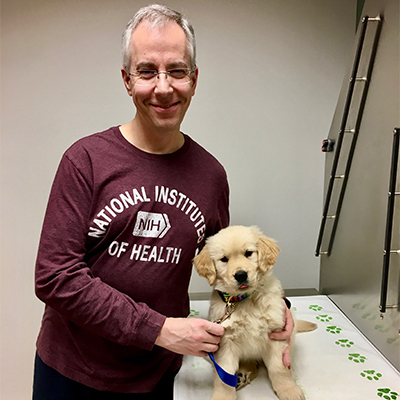 Michael Becker with his dog, Humphrey.

Today, we pay tribute to the life of Michael D. Becker. We are grateful to him and to all of our patients who participate in our clinical trials and help us to move research forward. Becker was powerfully open and articulate in sharing his diagnosis, his treatment and his cancer journey. He made it his purpose to raise awareness of the availability and preventive power of HPV vaccinations and the importance of clinical trials in moving medical progress forward. Our condolences go out to his family and friends.

Just before Thanksgiving in 2015, Michael Becker was getting ready to shower and noticed a large lump on the right side of his neck that hadn’t been there the day before. His family physician said it was probably a blocked salivary gland or infection and prescribed an antibiotic. When antibiotics did nothing to decrease the lump, his doctor referred him to an ENT, who biopsied the lump.  The results came back as advanced (Stage IV) head and neck squamous cell carcinoma.

“From the moment I saw the lump, I knew it was some type of cancer in my heart of hearts,” he says. “It wasn’t the word ‘cancer’ that surprised me but that it was stage IV. When you hear ‘stage IV,’ you know that’s as bad as it gets.”

Head and neck cancers usually begin in the moist tissues that line the mouth, nose and throat. The term encompasses cancers of the mouth, nose, sinuses, tonsils, salivary glands, throat and lymph nodes in the neck. One cause of these cancers is infection with cancer-causing types of the human papillomavirus, or HPV, which is what caused Becker’s cancer. He now advocates for education and awareness of the potential impact of the HPV vaccine for both boys and girls, a vaccine which wasn’t available to him when he was an adolescent.

“I’m on the frontline right now with making that information more widely disseminated,”  says Becker. “I want to make people aware that you can avoid my situation by getting the shot.” 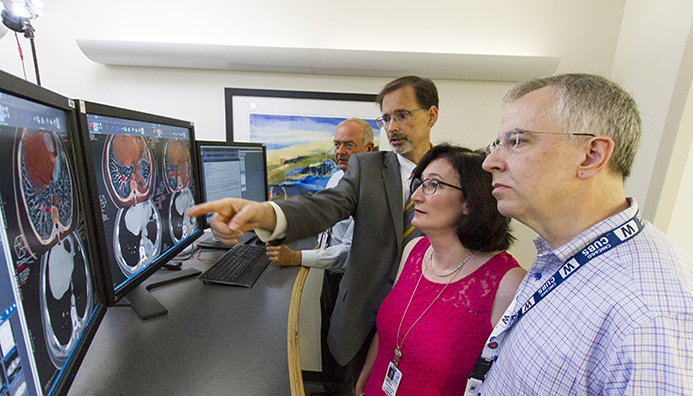 After meeting with a few doctors to plan next steps, Becker started chemotherapy and radiation treatments at Memorial Sloan Kettering Cancer Center (MSKCC) with the same team who treated actor Michael Douglas. Although the side effects of the treatment were brutal and included fatigue and skin burns from radiation on his neck, the treatment worked. The first PET scan after treatment showed that the disease was gone.

“We were in a pretty good mood at that time,” he says.

However, another PET scan in December 2016, showed his lungs “lit up like a Christmas tree,” with many new tumors. The next course of action was to investigate new cancer treatments, such as immunotherapy, through clinical trials.

Becker reached out to James Gulley, M.D., Ph.D., Chief of CCR’s Genitourinary Malignancies Branch.  He knew Dr. Gulley from his days as chief executive officer of two cancer treatment and diagnosis biotechnology companies and was surprised to find that Dr. Gulley had an open phase I immunotherapy trial for all solid tumors. His diagnosis of head and neck cancer meant he would be eligible for this trial.

All patients on this trial received an active drug, but Becker says the side effects were in such sharp contrast to chemotherapy and radiation that he would swear he was getting a placebo. While on this trial, investigators monitored Becker’s tumors with imaging to see what was happening behind the scenes. The tumors continued to grow slowly throughout treatment. Once they started growing faster, Dr. Gulley and Becker decided it was best for him to be taken off the trial and return to MSKCC for chemotherapy treatment.

Even though the trial was not successful for Becker, he encourages patients to be their own advocate and learn about their disease and the different kinds of trials that are available.

“I’m encouraging more people to explore clinical trials,” he says. “Every single person I’ve met at the NIH has been amazing in my journey.”

Becker is now back at MSKCC and his disease is responding well to chemotherapy. The hope is to buy more time by knocking his cancer back enough through chemotherapy so that his body can be better suited to attack the cancer cells through potential new treatment options in the future.

An advanced-stage cancer diagnosis changes the lives of the patient and family members, and it can come with a large emotional burden. Knowing he wouldn’t have the emotional capacity to retell his diagnosis and treatment story to each friend and family member repeatedly, Becker he started a blog as an easier way to disseminate information on his treatment. As he continued with the blog, he realized it could also be a source of information for people who just had received a diagnosis or who were going through a similar treatment.

“It became cathartic and a way to think about each step along the journey and how it was impacting me,” he says. “It’s helpful for my family, and I see more of the emotional impact of my cancer journey instead of just the test results.”

The blog, and his supportive wife, pushed him into writing a memoir and sharing his story with the world. He published his memoir, A Walk with Purpose, in April 2017.

“It forced me to go back and look at my life, and it really gave me the premise that I had a good life and a full life and got to do a lot of things,” he says.

Becker says he is continuing his walk with purpose with his wife and two daughters in the hopes that he can increase awareness of HPV-related cancers and the importance of adolescents receiving the HPV vaccine. He is hopeful for the day when better treatment options will become available.