Using the immune system to fight, and win, the battle against cervical cancer 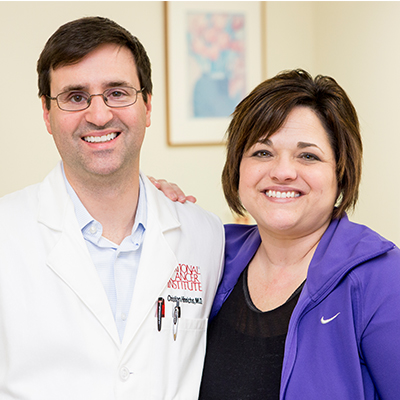 Arrica Wallace and Christian Hinrichs, M.D., discuss her most recent scans at a follow-up visit to NIH. “I am a huge NIH advocate,” she says. “It’s a place that gives you hope when other places say there isn’t any.” Wallace now encourages patients to be an advocate for themselves, and she encourages people to look into NIH.

Aricca Wallace and Christian Hinrichs, M.D., catch up like old friends each time she comes to the National Institutes of Health Clinical Center for follow-up appointments. She updates him on her two boys’ wrestling competitions and state titles. He shows her pictures of the new puppy that is terrorizing his house. So far, they’ve finished each visit with Dr. Hinrichs telling her she is still cancer-free, something she never thought she would hear following her diagnosis with metastatic cervical cancer.

On July 1, 2011, at the age of 34 and despite a normal Pap smear three months prior, Wallace was diagnosed with stage III cervical cancer. Raising two small children with her husband, and otherwise healthy, she was ready to fight. “I was young and able to handle the aggressive chemotherapy and radiation. I thought everything would be fine,” said Wallace.

By January of 2012, her doctors found that the cancer had spread to her chest. She was referred to a clinical trial at M.D. Anderson Cancer Center, but the form of treatment was milder than the one she had already received. Chemotherapy, the remaining alternative, could “control, but not cure her disease.” She was told she might not survive a year.

“I didn’t really buy into that,” she says. “I’m a mom. I knew there had to be something else, so I started the chemotherapy and hoped another option might appear.” From February through April of that year, she went in for treatment three days per week, every three weeks. She was getting weak and her doctor, Verda Hunter Hicks, M.D., in Kansas City, Missouri, suggested a break to let her body recover.

At about the same time, Christian Hinrichs, M.D., a Lasker Clinical Research Scholar in CCR’s Experimental Transplantation and Immunology Branch, received approval for a protocol to treat advanced cervical cancer with cellular immunotherapy. He started reaching out to colleagues to alert them  to the study and to seek patient referrals. He knew Dr. Hicks from medical school at the University of Missouri – Kansas City, and she was one of the people he reached out to.

“Minutes after she got off the phone with Dr. Hinrichs, Dr. Hicks called and said, ‘You’re going to the NIH in Bethesda,’” said Wallace. “I’d never heard of the NIH before, but I said okay. What do I have to lose?”

Wallace met Hinrichs and his team in May 2012. Their study was brand new; one patient had signed on but had not yet received tumor-infiltrating lymphocyte (TIL) therapy. “I remember the doctor telling me that the only thing he knew for sure is I would lose my hair. I pulled my wig off and said, ‘Been there, done that. If it doesn’t work, maybe it will buy us more time,’” said Wallace.

Wallace had surgery the following month to remove a large lymph node in her chest, near the aorta. After recovering from the surgery, she returned to her home in Manhattan, Kansas, and enjoyed the next month with her family.

“I remember it like it was yesterday,” said Wallace. “Every time I passed a certain ballfield in Kansas City, I would remember my son pitching in a championship game. I had to go back to the NIH that afternoon, so I had the coach call a time out and all the boys came to give me a big hug.”

That August, Wallace was given the single infusion of TIL grown from her tumor and returned one month later for her first scan. The scan showed shrinkage of most of the tumors by over 50 percent. Some were completely invisible. “That was amazing,” said Wallace. “Finally, what I believed in my heart was actually showing up on scans.”

By December 2012, no tumors were visible and her scans have been clear ever since. She says she always has “scanxiety” when she has her follow-up visits, but so far they have all come back cancer-free.

She has had some symptoms from the 31 doses of radiation and 18 doses of chemotherapy she has been through since her diagnosis. “When you put that much poison in your body, you’re bound to have other things happen,” said Wallace. “But the NIH has been phenomenal about answering my calls, working with my doctors here and making sure that everything can be as normal as possible.

“I am a huge NIH advocate,” she says. “It’s a place that gives you hope when other places say there isn’t any.” Wallace now encourages patients to be an advocate for themselves, and she encourages people to look into NIH.

“You can’t really do better than what we’ve done with her,” Hinrichs says.