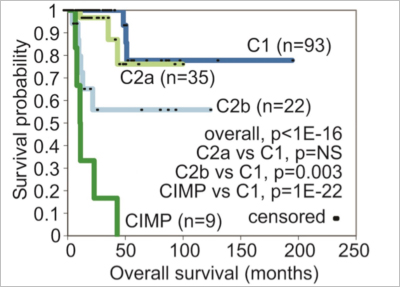 Renal cell carcinoma (RCC), the most common form of kidney cancer in adults, is not a single disease but rather a collection of different tumor types driven by distinct genetic changes that arise within the same tissue. Papillary RCC represents 15 to 20 percent of RCC diagnoses and can manifest as an aggressive, solitary tumor or as multiple, slow-growing tumors.

Papillary RCC itself has two main subtypes, type 1 and type 2, that are distinguished histologically. Little is currently known about the genetic basis of non-hereditary papillary RCC and patients receive treatment simply based on disease stage. If caught early, the disease can usually be cured surgically. However, there are no effective forms of treatment for advanced disease. To provide insight into this complex kidney tumor type, W. Marston Linehan, M.D., Chief of CCR’s Urologic Oncology Branch, and numerous colleagues in The Cancer Genome Atlas Research Network performed extensive genomic analysis of 161 papillary RCC tumors in a study published in the New England Journal of Medicine in November 2015.

Based on tumor histology, the researchers identified 75 type 1 tumors, 60 type 2 tumors, and 26 tumors that could not be categorized as type 1 or type 2. Most of the type 1 tumors were localized (stage I), while the type 2 tumors were more frequently advanced or metastatic (stage III or IV), a finding consistent with previous studies. Analysis of chromosome alterations revealed three subgroups.

One group, consisting mainly of type 1 and other low-grade tumors, showed chromosomal gains, particularly of chromosomes 7 and 17. The other two groups included predominantly type 2 tumors. One showed few genome copy number changes, while the other had multiple chromosome losses and was associated with poorer patient survival.

The investigators then sequenced the expressed regions of the genomes in 157 of the tumors to identify potential mutations. Significantly mutated genes included MET, SETD2, NF2, KDM6A and SMARCB1, which were altered in 24 percent of tumors. Evaluation of genes previously associated with cancer revealed six additional significantly mutated genes, FAT1, BAP1, PBRM1, STAG2, NFE2L2 and TP53, that increased the number of tumors with alterations to 36 percent. Several of the identified genes are components of well-known cancer-associated pathways, including the Hippo signaling pathway, the SWI/SNF complex, and chromatin modification complexes, and were mutated in both type 1 and type 2 tumors. They also identified gene fusions involving TFE3 and TFEB, which were previously associated with papillary RCC.

When they examined the changes according to papillary RCC subtype, the scientists found several alterations that were specific to each. For example, the majority of MET mutations were identified in type 1 tumors. This included the expression of an alternate MET RNA transcript that may result in ligand-independent activation of MET. In contrast, alterations in CDKN2A, due to loss of chromosome 9p21, as well as mutations in SETD2, BAP1, and PBRM1 were associated with type 2 tumors. The researchers also identified numerous loci with somatically increased DNA methylation in nine tumors that were unmethylated in matched healthy tissue, which they referred to as a CpG Island Methylator Phenotype (CIMP). Eight of these tumors were type 2 and patients with CIMP-associated tumors were younger at diagnosis and had a significantly lower chance of survival.

By combining analyses of copy number changes, DNA methylation, messenger RNA and microRNA levels, and protein expression, the investigators identified four tumor clusters. Cluster C1 was enriched for type 1 tumors and was associated with a gain of chromosome 7, MET mutation, and an early stage of tumor development. Cluster C2a was predominately type 2 but was also associated with an early stage of tumor development as well as a DNA methylation pattern, called cluster 2. Tumor cluster C2b consisted exclusively of type 2 and unclassified papillary RCCs and was associated with advanced tumor development, mutation of SETD2, and a second methylation pattern, cluster 1. Finally, the CIMP-associated papillary RCCs made up cluster C2c. One distinguishing feature of type 2 tumors that emerged from the combined analysis was increased expression of the NRF2-antioxidant response element (ARE) pathway, this is exemplified by the expression of the well-known NRF2-ARE gene NQO1. NQO1 expression was lowest in cluster C1 tumors, intermediate in cluster C2a and C2b tumors, and highest in cluster C2c tumors. Interestingly, increased NQO1 expression was associated with decreased survival.

The scientists noted that some tumors lacked obvious cancer-driving mutations. Manual evaluation revealed mutations in known cancer-associated genes, including PTEN, NRAS, KRAS, TP53, TSC2, and the MLL and ARID families, in 27 percent of the tumors. The majority of the remaining 37 tumors were type 1 and showed a gain of chromosome 7, which is observed in a number of other tumor types, and could be a driving event, since it is associated with increased MET expression. However, additional genes on chromosome 7, including EGFR, prevent definitive identification of the specific driver gene in these tumors.

Taken together, the analyses performed by the researchers revealed that type 1 and type 2 papillary RCC are two distinct diseases and that type 2 can be further stratified into three subgroups. This improved classification of papillary RCC may lead to the development of more specific, targeted therapies as well as improved disease management and design of clinical trials.