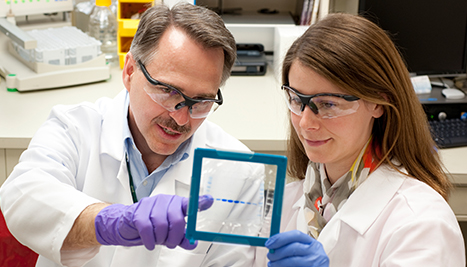 Barry O’Keefe (left), Ph.D., is the Acting Chief of the Molecular Targets Program which collaborated on the “Development of Large Scale Production, Anti-HIV Microbicide in Soya Beans” with the Frederick National Laboratory and the Brazilian Agricultural Research Corporation.
Photo Credit: Rhoda Baer

Among the accomplishments being honored are the roles of CCR teams in developing two recently approved anti-cancer drugs and a production method for an anti-HIV microbicide: “Avelumab, New Therapy for Metastatic Merkel Cell and Urothelial Carcinomas,” for a Cooperative Research and Development Agreement (CRADA) with EMD Serono to expedite the regulatory approval of the checkpoint inhibitor avelumab; “Development of Large Scale Production, Anti-HIV Microbicide in Soya Beans” for the development of a production method of CV-N in soy beans to address the lack of commercially sold HIV microbicides and access to other HIV prevention techniques in developing countries; and “FDA Approval: Personalized Cancer Treatment to Cure Deadly Blood Cancers” for the drug Yescarta that received FDA approval for the treatment of adult patients with relapsed or treatment-resistant large B-cell lymphoma.

The FLC will present a total of 30 awards to 24 laboratories representing 10 federal agencies during the FLC National Meeting on April 25, 2018 in Philadelphia, PA. To learn more about how to partner with NCI CCR, visit techtransfer.cancer.gov.