“They gave me my life back” 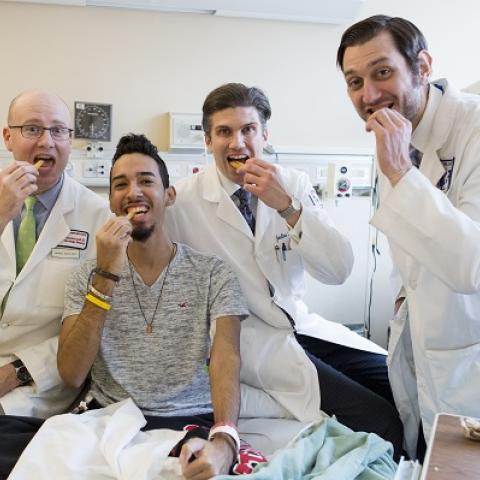 Nineteen-year-old Joel Rodriguez didn’t think he would be able to eat again. However, a collaboration between surgeons in the Center for Cancer Research (CCR) and the National Institute of Allergy and Infectious Diseases (NIAID) gave that back to him. Rodriquez and his treatment team celebrated the success of their operation with Rodriguez’s food of choice —  cheeseburgers and French fries — in his hospital room.

Rodriguez’s symptoms started in the summer of 2016.  His  appetite was so poor that he couldn't finish meals. After he got his appetite back, he started having irregular stools, so he went to a gastrointestinal doctor in his home state of New York. The doctor prescribed probiotics, but the pain and irregularity continued.

A CAT scan in the fall revealed a small bowel obstruction. Doctors recommended bowel rest with total parenteral nutrition (TPN) and steroids. TPN is a feeding method that bypasses the gastrointestinal (GI) tract by giving fluids through a vein. The GI tract is rested, but he was receiving all of his nutrition through an IV and couldn’t eat any solid food. Rodriguez says his symptoms kept getting worse, and the TPN wasn’t a long-term solution. Being around food became extremely difficult, and he eventually dropped his cybersecurity classes at St. John’s University in New York to focus instead on being able to one day eat again.

“The worst part of it was sitting at home and knowing there’s no hope,” Rodriguez said.

An immunologist recommended Rodriguez consider going to NIH and NIAID for treatment options. Because Rodriguez has APECED syndrome, an autoimmune disease that mainly affects endocrine tissues, many doctors were reluctant to perform an operation because of the uncertainty around his diagnosis and the APECED syndrome.

Michail Lionakis, M.D., Sc.D., a surgeon at NIAID, researches APECED and was the lead physician on Rodriguez’s condition. He consulted with Jonathan Hernandez, M.D., from the Center for Cancer Research (CCR) for his opinion on Rodriguez’s case. Dr. Hernandez decided an operation was the only treatment option to remove scar tissue in Rodriguez’s GI tract that was the source of his health problems. Dr. Hernandez and Jeremy Davis, M.D., from CCR, performed that 7-hour surgery at the NIH Clinical Center.

“He was a 19-year-old kid with TPN,” Hernandez said. “We were going to try everything possible to get him a cheeseburger again.”

It took some time for Rodriguez’s digestive system to start working after the surgery, but “he achieved the goal of eating that cheeseburger,” Hernandez said.

“TPN kept me alive, but I don’t know how I was doing it,” Rodriguez said. “They gave me my life back.”