RNA Processing is a Potential Therapeutic Target in Ewing Sarcoma 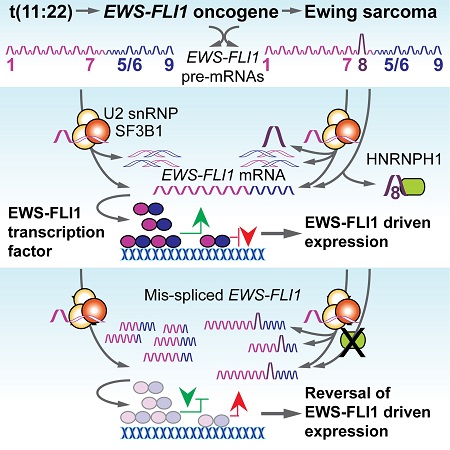 An aggressive cancer of the bone and soft tissue, Ewing sarcoma (ES) is most commonly diagnosed in adolescents and young adults. Approximately 85 percent of ES tumors are caused by a translocation that fuses the front half of the EWSR1 gene to the back half of the FLI1 gene. This fusion gene, called EWS-FLI1, encodes a transcription factor, which promotes changes in gene expression that favor tumor formation and ES cell survival. Because the EWS-FLI1 fusion oncoprotein has proven a challenging drug target, Natasha Caplen, Ph.D., of CCR’s Genetics Branch, and her colleagues decided to use a genome-wide RNA interference (RNAi) screen to identify genes that alter EWS-FLI1 activity.

From their initial screen, the researchers selected about 200 genes for additional study. Of these, they confirmed with two or more small interfering RNAs (siRNAs) 26 genes that, when silenced by RNAi, reduced EWS-FLI1 protein activity. Many of the genes identified by the RNAi screen as required for EWS-FLI1 activity function in mRNA splicing and processing including SF3B1, a component of the U2 small nuclear ribonucleoprotein particle (snRNP), SUPT6H, a transcription elongation factor and histone chaperone, and HNRNPH1, an alternative splicing factor.

To understand the mechanism of action of these three genes on EWS-FLI1 activity, the investigators generated expression profiles of an ES cell line following silencing of each lead candidate gene. They demonstrated a reversal of the expression of many genes regulated by EWS-FLI1 and then showed that silencing each of the three identified genes decreased expression of the EWS-FLI1 transcript itself. When they examined its protein expression, the scientists found depletion of HNRNPH1 using siRNAs resulted in a near complete loss of EWS-FLI1 expression. Likewise, depletion of SUPT6H decreased EWS-FLI1 levels but to a lesser extent. Interestingly, a reduction in the levels of SF3B1, led to the production of multiple protein products. This led the team to suggest that silencing SF3B1 results in the formation of EWS-FLI1 transcript variants. All three silenced lines also showed reduced cell viability, mirroring the effect of targeting the EWS-FLI1 transcript by RNAi directly.

Translocation breakpoints can vary in different ES tumors so the researchers next examined the effects of their three target genes on EWS-FLI1 in three additional ES cell lines with distinct breakpoints in the EWSR1 and FLI1 genes. Depletion of SF3B1 or SUPT6H by RNAi reduced EWS-FLI1 expression in all four ES lines. In contrast, HNRNPH1 silencing only affected EWS-FLI1 expression in the two lines in which the breakpoint in the EWSR1 gene results in a pre-mRNA that includes EWSR1 exon 8. To generate an in-frame transcript that encodes the EWS-FLI1 protein the splicing machinery must remove this exon.

The investigators focused subsequent studies on HNRNPH1 and SF3B1 given their known roles in splicing. They showed that silencing of HNRNPH1 in ES cells with the breakpoint in the EWSR1 gene that includes EWSR1 exon 8 leads to the retention of this exon, generating an out-of-frame RNA transcript, which prevents expression of the fusion protein. Thus, silencing HNRNPH1 reversed the expression of genes regulated by EWS-FLI1 and reduced cell viability only in those cells with pre-mRNAs containing EWSR1 exon 8. The researchers next demonstrated that HNRNPH1 binds two G-rich motifs within EWSR1 exon 8 and propose that targeting this interaction could be used to block the expression of the EWS-FLI1 protein.

Understanding the effects of depleting SF3B1 on the expression of EWS-FLI1 proved more complex than HNRNPH1, since a decrease in the amount of SF3B1 in ES cells results in a mis-splicing of EWS-FLI1 rather than a complete inhibition of its splicing. This mis-splicing of the EWS-FLI1 transcript, either by silencing SF3B1 or other U2 snRNP components, or through the use of the SF3b spliceosome inhibitor, Pladienolide B (PlaB) disrupts the generation of the full-length EWS-FLI1 protein and alters the expression of many genes regulated by EWS-FLI1, but it also generates variant EWS-FLI1 proteins. The researchers still need to study these variant EWS-FLI1 proteins in more detail, but targeting the U2 snRNP in ES cells may be an interesting approach as they observed a substantial decrease in the growth of ES cells when SF3b activity was inhibited.

Together, these results demonstrate the sensitivity of EWS-FLI1-expressing ES cells to the loss of RNA-processing proteins, especially proteins that ensure proper mRNA splicing. Screening for compounds that inhibit either HNRNPH1 or SF3B1 could lead to promising therapeutic targets for patients with ES. Lastly, this study also suggests that genome-wide RNAi screens may be useful approach for the identification of proteins required for the expression or activity of other fusion oncoproteins.