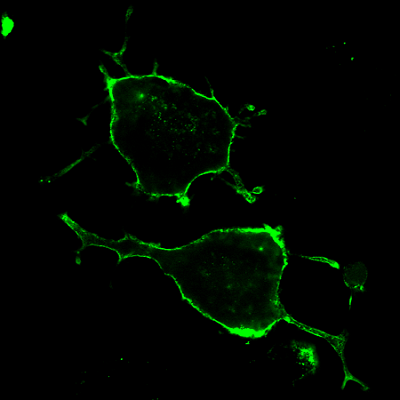 A team of scientists led by the Center for Cancer Research's Allan M. Weissman and Yien Che Tsai has discovered a molecular mechanism that explains the extreme toxicity of botulinum neurotoxin A (BoNT/A), the most potent BoNT strain. The discovery, published June 5 in PNAS, also identifies a molecular target that the researchers hope will eventually lead to improved therapies to treat exposure and severely undermine the potential use of BoNTs as bioweapons.

Botulinum neurotoxins, produced by the bacteria Clostridium botulinum, are the most lethal substances found in nature, yet few treatments exist to combat exposure. Doses as low as 70 billionths of a gram can cause complete muscle paralysis and lead to respiratory arrest, heart attack or even death. Although BoNT exposure is still relatively rare, with less than 200 cases reported in the U.S. each year, there is concern that the extreme potency and toxicity of these agents make them prime candidates for bioweapons development.

“BoNT/A is an extremely long-lived toxin and that’s useful in terms of its therapeutic benefits, but that’s also what’s most worrisome about it from a public health standpoint,” said Weissman, M.D., Chief of CCR’s Laboratory of Protein Dynamics and Signaling. “If a person is exposed just once, it can result in total paralysis and the need for long-term respiratory support.”

BoNTs exert their paralytic effects by shutting down transmission of acetylcholine between motor neurons and muscle cells. Toxin-neutralizing antibody treatments can prevent uptake of BoNT/A and other BoNTs into cells, but these treatments are ineffective against the paralytic effects of toxins that have already gained entry. “It’s not enough to inhibit entry; it’s important to accelerate toxin removal from the cell,” said Tsai, Ph.D., Staff Scientist in the Laboratory of Protein Dynamics and Signaling.

The scientists believed that the key to discovering ways to remove BoNTs from compromised motor neurons and reverse paralysis might lie in first understanding the basis for the unusually long-lasting effects of BoNT/A in these cells. BoNT/A persists in motor neurons for up to six months, while some other BoNTs can be degraded in a matter of days.

In experiments with human cell lines, including neuroblastoma cells and mouse motor neurons, the scientists discovered that an enzyme called VCIP135 (also known as VCPIP1) removes small proteins called ubiquitins from BoNT/A, which would otherwise flag the foreign toxin for degradation. The deubiquitinating enzyme allows BoNT/A toxin to persist in cells by outpacing the action of the enzymes that add the ubiquitin tags.

Their experiments suggest that VCIP135 is a potential molecular target to halt the action of and reverse BoNT/A toxicity. For example, suppressing expression of VCIP135 caused ubiquitinating enzymes to regain dominance and allowed the cells to degrade BoNT/A. Importantly, the absence of VCIP135 caused no toxic side effects in any of the tested cell lines.

In addition, the scientists found that VCIP135 binds to a completely different region of BoNT/A than the ubiquitinating enzymes. This suggests that the binding of VCIP135 could be targeted without disrupting the vital function of ubiquitinators.

These findings provide a starting point for developing agents that either suppress the deubiquitinating activity of VCIP135 or block it from binding to BoNT/A, thereby restoring the dominance of ubiquitinating enzymes and reversing paralysis. “Our results suggest a pathway to target to accelerate the clearance of the toxin. If it pans out, it could have a tremendous impact on public health,” said Tsai.

“We went looking for something that wasn’t obvious and unmasked this function of VCIP135,” said Weissman. “This now becomes an opportunity. Scientists could take advantage of this research as a way to diminish the threat from BoNT/A.”